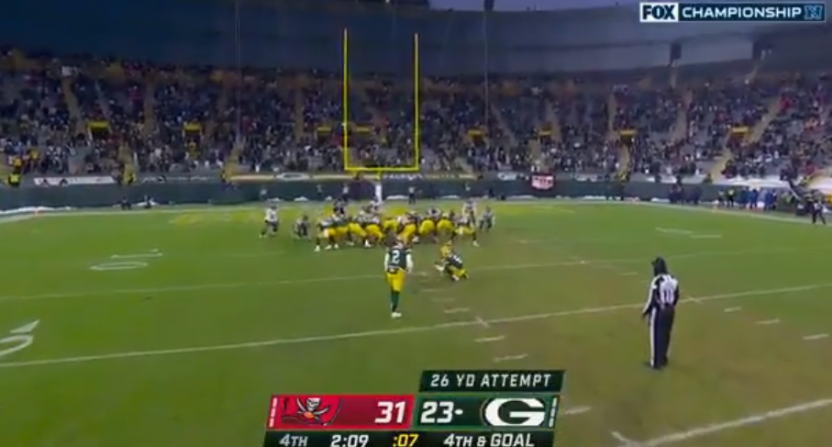 The Green Bay Packers put together a fantastic season. They went 13-3 to get the NFC’s No. 1 seed, and Aaron Rodgers had otherworldly numbers that will result in his third NFL MVP award. So it’s really unfortunate that the Packers’ season had to end in a way that took things out of Rodgers’ hands in the final minutes of the NFC Championship Game, thanks to a dumb coaching decision.

The Packers trailed 31-23, and had 4th-and-Goal at the Tampa Bay eight-yard line with 2:09 remaining. This seemed like an obvious decision to go for it, especially with Rodgers and a Green Bay offense that had historically great red-zone production this season.

However, Green Bay head coach Matt LaFleur opted for a Mason Crosby field goal to get the Packers to within five points- which means the Packers still needed a touchdown, and there was no guarantee they would get the ball back. And that’s with some guy named Tom Brady quarterbacking the other team.

Fox color commentator Troy Aikman couldn’t believe the decision to kick the field goal: “I’m really surprised by that decision, Joe (Buck). I thought that they would go for it on fourth down. You’re just not sure with Tom Brady that they (the Packers) will get another shot at it.”

The Packers chose to kick a field goal down 8 with just over 2 minutes remaining, instead of going for a TD on 4th-and-Goal. pic.twitter.com/ByxDJyBATS

The Packers indeed did *not* get another shot at it. The Buccaneers got three first downs to lock up the 31-26 victory. And even if Tampa Bay didn’t get the final first down, the Packers may not have had any time to work with anyway (again, needing a touchdown).

The Bucs lock up the Super Bowl berth. pic.twitter.com/OkufnzSFJQ

Sure, Tom Brady threw three interceptions in the second half, and the Packers had really turned up their defensive effort overall in the final 1.5 quarters. And if the Packers — who had all three timeouts remaining — were able to get a stop on defense, Rodgers would have a chance to lead Green Bay to a game-winning drive. The analytics didn’t think the decision was that bad on the surface either.

We preferred go, but more narrowly than I would have thought.

Needed a 21% chance to justify going for it. League average is 23%. But the Packers are also better than league average.

But these decisions and situations aren’t all equal. There’s a big difference between the average quarterback and offense being at the eight-yard line than there is Aaron Rodgers and the Packers. There’s a big difference between an average quarterback and offense being on the opposition than there is Tom Brady and the Buccaneers with the game on the line.

You won’t find many bigger analytics supporters than yours truly, but there’s a point where *feel* and leaving it in the hands of your stars — and out of the hands of the opposition’s stars — outweighs what the general number-crunching suggests. It’s just like what happened in the World Series when Tampa Bay Rays manager Kevin Cash chose to take a cruising Blake Snell out of Game 6 at 73 pitches and rely on the bullpen, which predictably didn’t pay off.

Additionally, even if the Packers failed to get the touchdown on 4th-and-Goal, they still would’ve had an opportunity to get the game into overtime. The Bucs would’ve been pinned back at likely their own eight-yard line, and in the same situation as they were following the field goal: get two or three firsts downs and the game would be over. And if the Packers got a stop, they would’ve likely gotten good field position with the opportunity to get a touchdown and two-point conversion.

The Packers needed to get a stop and score a touchdown following either a failed 4th-and-Goal try or the field goal. And the former offered the chance to just get the touchdown immediately. Instead, they never got that chance at all.

I asked Shaq Barrett if he was surprised the Packers kicked a field goal. “100% surprised. Hey, thank you. There’s no guarantee you’re going to get another shot at it.”

When you have Rodgers/Adams and they have Brady, not sure how relevant that 2.5% is. https://t.co/BrooVjaN2Q

they kicked a field goal down eight points with 2:05 to go with the greatest red zone offense in league history

Matt LaFleur must've been waiting until he gets a quarterback better than Aaron Rodgers to go for it from the 8-yard line down 8 late in the fourth quarter of the NFC Championship Game.

Matt LaFleur worked his whole life to have a chance to coach a team to the Super Bowl, and he just kicked a field goal down 8 with two minutes left. Never have dreams. Never care about anything

Can't stop thinking of Arians philosophy of "no risk it, no biscuit" and comparing it to the Packers kicking that FG.

Given the option of having this game decided by Rodgers or the Packers defense…I don't understand that decision for the life of me.

I want Rodgers to be asked if he tried to change Lafleur’s mind on kicking the field goal. I can’t believe he agreed with it.

I cannot fathom a world where kicking a field goal, down eight points with a little over two minutes left and with all three timeouts, is the right decision, but you do you, Matt LaFleur.

Brady hasn’t had a great second half… and I’m no coach, but I would’ve gone for it on 4th. (Rodgers could’ve run that one him, himself.)

That was a penalty on 3rd down. Refs missed a bunch of similar penalties throughout the game, on both teams. Both can be true.

GB was down 8 with 2 minutes left a kicked a FG. They chose to put themselves in that position. That's the key story here.

The Bucs are certainly happy about the decision, and now they will take on the winner of Sunday’s game between the Kansas City Chiefs and Buffalo Bills in the Super Bowl.