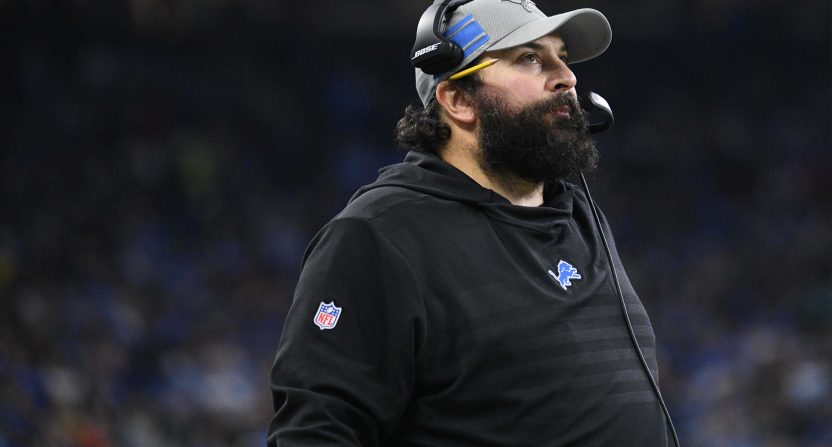 Matt Patricia’s first year as the head coach of the Detroit Lions has gone, well, very badly. The Lions are 5-10, and they’re staring at a potential top-five draft choice. That’s a silver lining, of course, but there’s a real question as to whether or not Patricia will be around to try and develop whoever they end up taking.

Detroit has underachieved all year, with players not being put in a position to succeed and not being motivated to play for a guy who apparently treats them like high school kids, with lengthy practices full of running, including outdoors in freezing temperatures to prep for a game in a dome. There was also the embarrassing blowout loss to the Jets to open the season, and the time he lost it with a reporter whose press room posture didn’t meet Patricia’s standards.

Patricia’s lengthy rant about how a reporter needed to respect the process was so impossibly misguided that it was pretty clear that, unlike Belichick, what we were seeing with Patricia was what we would be getting. Now, there’s a new report from Dave Birkett in the Detroit Free Press that notes Patricia is routinely late to team meetings and press conferences.

Patricia, who has routinely showed up late for his media availability sessions in his first year as head coach, was asked about the importance of punctuality for a head coach at his weekly news conference Wednesday — a session that was pushed back 30 minutes from its original scheduled time, and then started 15 or so minutes after that.

“I think it just depends on the situation really,” Patricia said. “It depends. There’s a pretty busy schedule from those situations I think for everybody. I think fluidity is probably the best answer for you.”

Patricia’s lack of punctuality also has been an issue in team meetings this year, where one former player said the coach was consistently late during his time with the Lions.

This is, of course, pretty funny. Patricia can’t be bothered to show up to press conferences on time, but heaven forbid a reporter not be sitting on the edge of his or her seat.

Matt Patricia has arrived at the announced time of his press conference once this year. I've never seen any pro or college coach struggle with punctuality anywhere near this degree.

Patricia’s decision to immediately antagonize local media to a degree beyond what Belichick has ever done is a really fun reminder that hiring off of that particular coaching tree is almost always a bad idea. Belichick is so hands-on that what you end up with is a group of middle managers standing around him learning all the wrong lessons and trying to emulate the worst parts of Belichick with none of the success that affords Belichick all of those grating tics.

We’ll have to wait and see whether Patricia is on time to his year-end interviews. That one he should maybe consider skipping altogether.