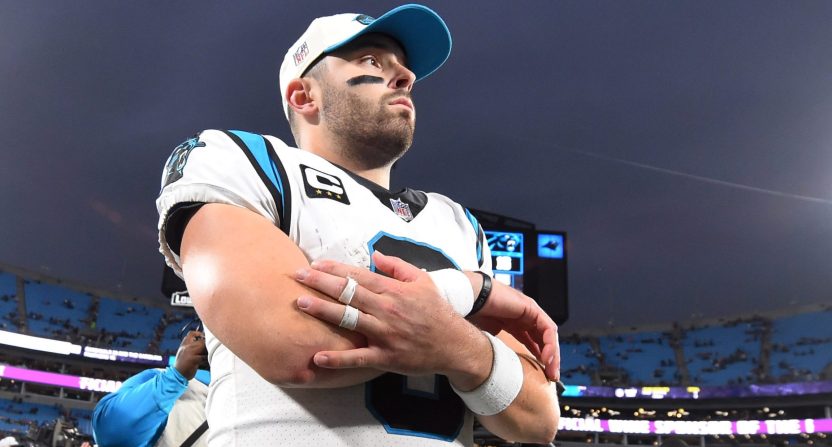 No one would blame Carolina Panthers head coach Matt Rhule if he decided to bench starting quarterback Baker Mayfield in an attempt to kickstart the team’s offense. However, while Rhule acknowledged Monday that the offense is sputtering, he’s sticking with his guy…for now.

The Panthers dropped to 1-3 on Sunday after losing 26-16 to the Arizona Cardinals in a game in which they were outgained 338-220 and converted 2 of 10 third-down attempts. They are currently averaging only 262.3 yards per game on offense this year through four games, which ranks third-worst in the NFL.

Chief among Carolina’s problems so far is Mayfield, whom the team traded for this offseason. The former Browns QB is completing just 54.7 percent of his passes for 747 yards, four touchdowns, and three interceptions. Panthers fans booed Mayfield and the team during the game as well.

Baker is getting booed off the field by Panthers fans 😬 pic.twitter.com/1H1AuQenpR

The problem for the team is that they don’t have a better option available. Sam Darnold lost his starting job to Mayfield for a reason. And when asked if a change was coming on Monday, Rhule said he understands why Carolina fans are frustrated.

Matt Rhule said he has no problem with fans booing. "They want to see good offense and be entertained and it's not happening. I get it."

“They want to see good offense and be entertained and it’s not happening,” Rhule said, via the Associated Press’ Steve Reed. “I get it.”

However, he also noted that he’s going to keep rolling with Mayfield, not that he has many choices.

Matt Rhule: "I think Baker's our quarterback. We have to continue to find ways to help him. … Sam (Darnold) is not cleared right now."

“I think Baker’s our quarterback,” Rhule said, via The Athletic’s Joe Person. “We have to continue to find ways to help him. … Sam is not cleared right now.”

Panthers coach Matt Rhule: “We just need Baker to settle down and play within the scheme… That is something he believes in, we all believe in.”

“We just need Baker to settle down and play within the scheme,” Rhule said, via the Charlotte Observer’s Ellis Williams. “That is something he believes in, we all believe in.”

In three seasons with the Panthers, Rhule is 11-26 and is almost certainly coaching for his job this year. If things keep going like this, he might not make it to January.