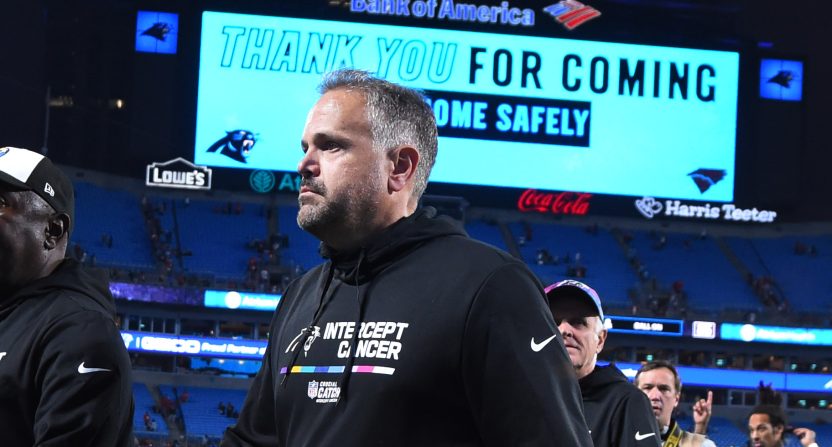 The Carolina Panthers had another extremely disappointing performance on Sunday against the San Francisco 49ers and fall to 1-4 on the season. That has led to huge questions surrounding the direction of the organization.

Following the loss, many took to social media to call for Panthers head coach Matt Rhule to be relieved of his duties as head coach.

Guys: Is it time to have a serious talk about Matt Rhule and the Panthers? pic.twitter.com/UF9RRCm23s

@lindseyyok is Matt rhule making it to the bye week for the panthers?

The #BAKERMAYFIELD experiment went wrong in Carolina. I was on the wrong side of that debate. Matt Rhule is just terrible. A lot of bad luck at the quarterback position but the richest owner in the NFL should be looking for a new Head Coach and vision. #Panthers

Is Matt Rhule the Panthers coach tomorrow? I’d say yes. They blame the QB. Make a chance. Hope for a spark

Rhule was asked about these rumors following the game, which he deflected in favor of talking about the game.

Matt Rhule on if he has talked to owner David Tepper about his job security. pic.twitter.com/wFH06xt9Ay

Considering his record in Carolina is now an abysmal 11-27 in three seasons with the organization, he could certainly be on the short list of coaches to be fired.

Rhule does have one thing going his way regarding his job security, which is the apparent respect and admiration of his locker room.

Christian McCaffrey on Matt Rhule: “I’m pissed we can’t get it done for him.”

Says Rhule has had his back, and that means something pic.twitter.com/FCvUF4xLXo

Brian Burns expressed his support — with some colorful language — of Matt Rhule. pic.twitter.com/vXOxTUXbHV

It is great that the Panthers locker room is standing behind Rhule, but the results speak for themselves when it comes to his tenure in Carolina.

It’s certainly not all his fault considering how poor newly-acquired quarterback Baker Mayfield has played thus far for the Panthers.

Maybe the Panthers let him remain head coach and make a change at quarterback, but this all seems like Rhule may be taking the fall for this poor start.