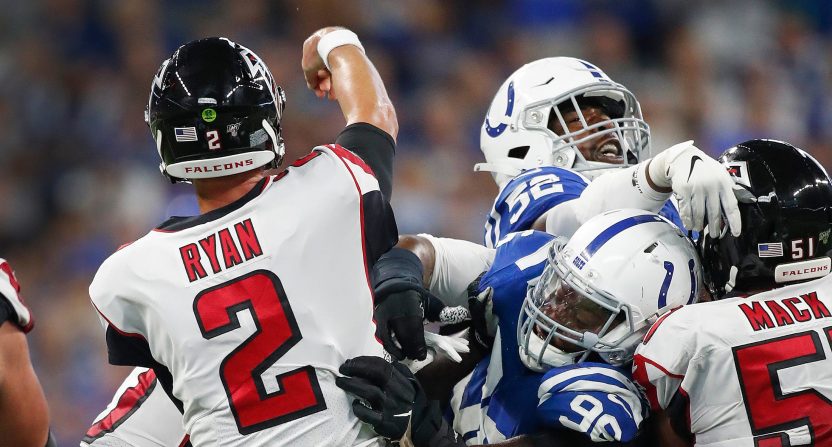 Ever since it was revealed that the Atlanta Falcons went all-in to try and convince Deshaun Watson to come to play for them, NFL folks have been wondering what will happen to current Falcons quarterback Matt Ryan. The writing was on the wall that, even if they didn’t land Watson, which they didn’t, Ryan’s time in Atlanta was over.

That situation appears to be imminent as Fox’s Jay Glazer is reporting that the Indianapolis Colts are “trying to work out a trade right now with Atlanta” for Ryan, though he noted that it was not finalized yet. [UPDATE: The deal is done!]

Scoopage: Colts are trying to work out a trade right now with Atlanta for QB Matt Ryan @nflonfox. Not completed yet but trying to finalize

Ian Rapoport also noted the potential trade, referring to it as “looming.”

The full story on the looming trade between the #Colts and #Falcons for QB Matt Ryan… https://t.co/utv483pkyB

And Mike Garafolo went as far as to say that he’d be “surprised” if the deal doesn’t happen.

It’s to the point now where many around the league would be surprised if Matt Ryan to the #Colts doesn’t happen. https://t.co/uyR4YSYaNw

It’s very likely that the Falcons will want to move Ryan today because there is a deadline at 4:00 p.m. ET when Ryan is due a $7.5 million roster bonus. He’s getting the bonus no matter what, it’s just a question of which franchise owns his rights at that moment and is required to pay it.

The Colts are in desperate need of a solid quarterback as they’ve traded away Carson Wentz after deciding he wasn’t going to be the answer. Acquiring Ryan would be a solid move for stability, even if he’s going to be a stopgap between now and whenever the team drafts their quarterback of the future. They could do worse than Ryan, who is a former NFL MVP, took the Falcons to the Super Bowl, and is coming off a season in which he threw for 3,968 yards, 20 touchdowns, and 12 interceptions.

The Colts had been rumored as a landing spot for Baker Mayfield but it appears they’d rather go for the stability of Ryan.

If and when the deal gets done, it opens the door for the Falcons to look at Mayfield as a potential replacement. There’s also Jimmy Garoppolo in San Francisco as well. Or, of course, they can look to the NFL Draft and start rebuilding now.

More to come on this but, in the meantime, the news of this impending trade has a lot of folks around the NFL talking.

I’m told #Colts and #Falcons began seriously discussing a Matt Ryan trade about 10 days ago. Indy GM Chris Ballard and his staff believe that Ryan – the former league MVP – turns them into Super Bowl contenders, thanks to their quality O-Line play and offensive stars. https://t.co/zcHR0cASRz

Let’s get this over with so the #Falcons rebuild can start. https://t.co/K5TazedjCb

This would be massive for the Colts and put ATL possibly in the QB market for a QB in draft or for Jimmy G and Baker Mayfield https://t.co/pLrp9RGi3i

Ryan is good fit there behind that offensive line and with that run game. So where does that leave Baker? Will Seahawks pursue him? #Denver7 https://t.co/DYpkezPTfv

Colts have been the most plausible potential destination for Matt Ryan all along. https://t.co/ttKjXwD50H

The #Falcons are poised to take a $40.5M dead cap hit if this trade is processed. https://t.co/ReQZA6D5Nf