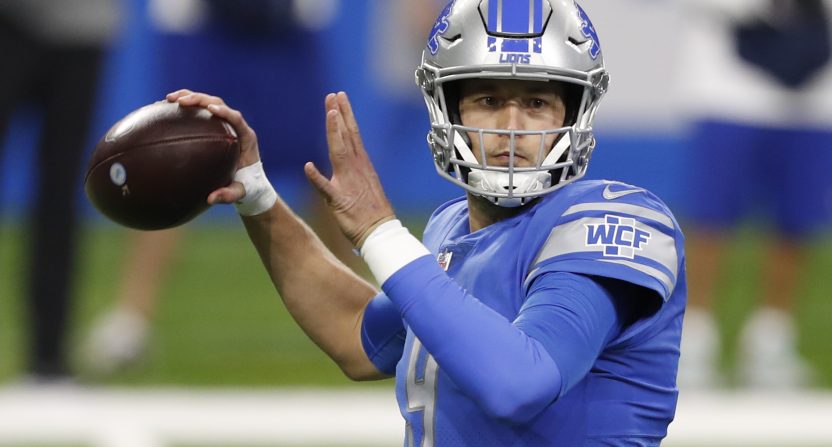 After 12 seasons, both Matthew Stafford and the Detroit Lions are looking for a fresh start as the two sides agreed to find a solution in order to send their franchise quarterback elsewhere. Tom Pelissero from NFL.com reported that in recent weeks, Stafford had been vocal with the Lions about playing somewhere else and the team is now going to try and make that work.

The move makes sense for both sides. Stafford is 32 and still has some quality years ahead of him. He could choose to stay with the Lions, who are in the midst of a rebuild but time is running out so if he were to make a move to a new team and maybe make them a winner, the time is now.

As for the Lions, like I said they are rebuilding. They just hired Dan Campbell as head coach and Brad Holmes as general manager, and Anthony Lynn as offensive coordinator according to ESPN’s Dan Graziano. With a brand new staff, the time is probably right to find a potential franchise QB that can be the cornerstone of the team for the foreseeable future.

The Lions are going to try and find a trade partner for Stafford. As Pelissero noted, Stafford has two years and $43 million left on his current deal. And as the NFL is entering a season where teams will experience a shrinking salary cap for the first time ever, Stafford might not be the best quarterback out there but he’s going to bring the best bang for the buck in terms of the cap.

It’s reported that the Lions are seeking a first round pick for Stafford and that seems like fair compensation. One potential snag with that is the Lions will be motivated to get a deal done before the fifth day of the 2021 NFL season. If Stafford is still with the Lions by then, they will need to pay him a $10 million roster bonus. Knowing there’s a timeframe where the Lions will want rid of Stafford while knowing that Stafford wants to leave, the Lions aren’t really in a negotiating position of strength and prospective trade partners may want to wait it out.

On the other hand, depending on how many teams are interested in trading for Stafford, it might put the Lions back into a position of strength. If a few teams are looking to trade, the one who wins will be the one who gives the Lions what they want in the timeframe they want. Those who wait out the Lions until after paying Stafford’s roster bonus might lose the chance to trade for him.

In terms of which teams might be interested, a number of teams could use Stafford. But as we know, a team may be able to use a quarterback like Stafford but that doesn’t necessarily mean they want him or are willing to trade for him. Looking at the NFL landscape, the Colts are now seeking a QB after Philip Rivers retired. Along those lines, Drew Brees is reportedly expected to retire from the Saints but they may be good with Taysom Hill and Jameis Winston (if the Saints re-sign him). The Panthers have made no secret they’re interested in a new QB as Teddy Bridgewater hasn’t exactly lived up to expectations. The 49ers have a great setup and if they’re looking to move on from Jimmy Garoppolo, they could be a potential option. The Washington Football Team made the playoffs and Taylor Heinicke had an impressive playoff performance but Washington needs to decide whether or not one game was enough to give Heinicke a bigger contract or go with another option. Both LA teams have similar quarterback situations and maybe they could make a call. I’m not saying all of these teams are interested, just that if one of these teams wind up trading for Stafford, I wouldn’t be surprised.

It’s going to be interesting to see what happens with Stafford and the Lions. Both sides seem to want to make this happen and are hopeful both can benefit. Work needs to be done but there’s a bit of time to make this work so that’ll be the focus in Detroit.