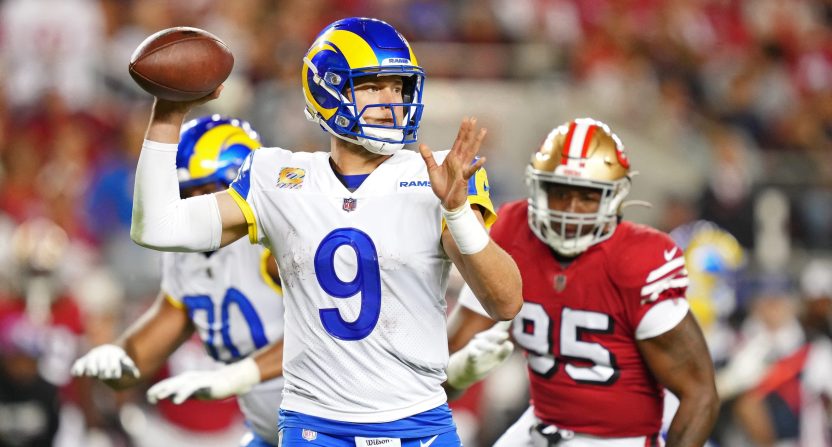 Things did not go especially well for the Los Angeles Rams during Monday night’s game against the San Francisco 49ers. For quarterback Matthew Stafford, it was an especially rough evening.

Stafford did throw for a respectable 254 yards but wasn’t at all efficient, needing 32 completions and 48 attempts to get there. There also wasn’t much distribution. Most of those passes were caught by Cooper Kupp or Tyler Higbee, who had 14 and 10 receptions, respectively. Unless we count the pick-six from San Francisco’s Talanoa Hufanga, Stafford also didn’t throw a touchdown pass and the Rams were kept out of the end zone all game.

The quarterback struggled with San Francisco’s pass rush throughout the night. He was sacked seven times, including a strip-sack by Samson Ebukam late in the fourth quarter.

As the game progressed and in its immediate aftermath, Stafford came under heavy criticism.

If I was good at memes I’d post the one of the guy (McVay) with his girlfriend (Stafford) looking back at the other girl (Goff). Just picture I did that

Cannot tell me Stafford is playing better than Goff right now. 🤷🏾‍♂️ If your a numbers guy then go check them

Stafford whenever Allen Robinson has a one on one in the red zone pic.twitter.com/p7h6gmU10U

Most interceptions thrown this season:

Overall, it has not been a great start to the season for Stafford. On the positive side of things, he’s completed 70.7% of his passes through the season’s first four games. If he continues at that pace, Stafford would easily be a career high. But he’s thrown for only 1,015 yards with four touchdowns, six interceptions and an 81.4 passer rating that — aside from his rookie year — would be a career low.

The real positive angle for Stafford and the Rams is in the standings. Monday’s loss only moved them to 2-2 on the season. Every team in the NFC West has the same record, so Los Angeles is far from buried in the division race. But the Rams also have the worst point differential in the division and, other than the Washington Commanders, the worst in the NFC.

Getting that turned around will depend a lot on how well Stafford can get back to top form.