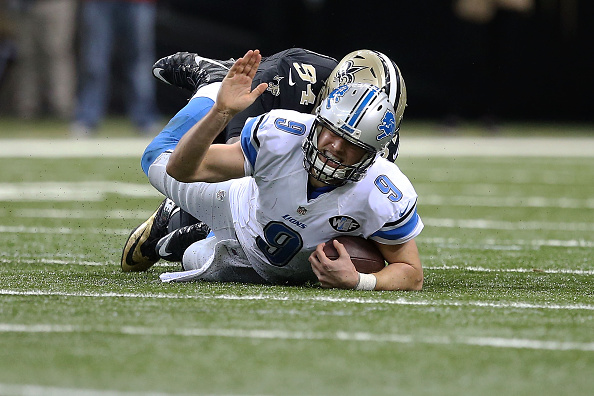 Matthew Stafford is the highest-paid player in the NFL, despite the fact that the 29-year-old has made one Pro Bowl and has led his Detroit Lions to zero playoff victories in eight seasons.

He got that big contract because he was in the right place at the right time. Approaching free agency, in his prime, coming off a magical season in which he led an NFL-record eight fourth-quarter comeback in order to get the Lions back into the playoffs. He’s on a desperate team that has never won a Super Bowl in a league that has 32 teams and fewer than 32 franchise-caliber quarterbacks, and this is the most pass-happy era in NFL history.

That’s why he’s making an average annual salary of $27 million, and it’s also why another quarterback will soon sign a deal that pays him even more than that.

But Stafford’s deal will inevitably leave the Lions tight for salary cap space in the years to come, which is concerning considering that the Georgia product clearly needs more help in order to get the Lions over the hump they’ve been trying to climb for half a century.

The Lions will have to decide whether to pay Ezekiel Ansah and Haloti Ngata next offseason, and deals belonging to Travis Swanson, Nevin Lawson and Tavon Wilson are also expiring. But Stafford’s receiving corps lacks depth, his running game has rarely done enough to balance out the offense, his offensive line is a liability and his defense ranks 26th in football in terms of points allowed.

Again, a lack of support factors in. The Lions have surrendered 27 or more points in all three of their losses, Stafford’s been sacked an unbelievable 17 times in his last three games, and his receivers have already dropped 13 of his passes.

But there’s no indication that’ll change, especially now that Stafford is hogging so much cap space.

The reality is the Lions were faced with a catch-22 here. Give Stafford his big contract and the rest of the team suffers so much that it can’t support him, or let Stafford go and you’re left with a more talented team that lacks a franchise quarterback in an era that requires contenders to possess exactly that.

And that’s just the luck of the Lions.