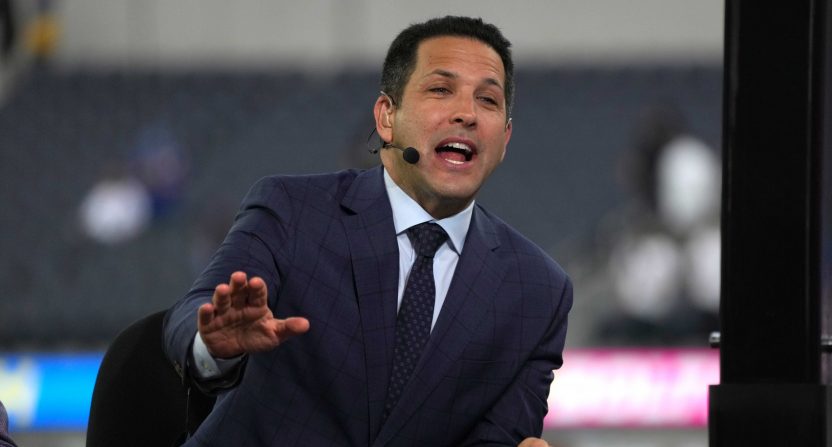 While the investigation into the workplace culture within the Washington Football Team has yet to drop any bombshells on owner Dan Snyder and former GM Bruce Allen (and probably won’t), we’ve learned a ton about Jon Gruden’s worldview. We’ve also now learned a bit more about ESPN NFL insider Adam Schefter’s journalistic ethics.

According to Sam Farmer and Nathan Fenno’s reporting for the Los Angeles Times, several released emails included showcase a very close relationship between Schefter and Allen, including one in which the ESPN reporter submitted an entire story for Allen’s approval and referred to Allen as “Mr. Editor.”

. @AdamSchefter sent Bruce Allen an unpublished draft of a story and called him “Mr. Editor” according to court filings the LA Times uncovered. https://t.co/3hxtarO9hd pic.twitter.com/l4Z9y9Jqeh

The news sparked an intense debate online amongst journalists and others in sports media regarding the ethics of such a relationship. Darren Rovell really stepped in it when he admitted that he has done similar things in the past, but for the most part, other media members have come out strongly against the idea that journalists should be doing something like this.

i mean, in his defense, its not like schefter has never purported to be anything other than league mouthpiece

getting a lot of "who cares, it's sports" about Schefter's unethical practices. In this specific instance, it's tens of thousands of people's jobs at stake.

Wow. Now we know why Adam Schefter is an NFL insider, he allows teams to proofread his stories for their liking before he posts them https://t.co/1214ttsmkl

The Schefter story boils down to one thing: too much sports 'journalism' is PR for the most powerful and exploitative entities in the athletic world.

The business of the NFL is predicated on literal physical sacrifice. Pro football journalism is literal PR. These are related.

I've never done anything remotely like what Schefter did. Addressing a source as "Mr. Editor" and telling him to let you know what he wants "changed" in your writing is way, way outside the norm.

It’s also been noted that, while the Schefter email looks pretty bad out of context, it’s possible that it might have been a way for him to curry favor with Allen, someone who has a reputation for being notoriously hard to work with.

Is it possible Schefter was just humoring Bruce Allen because he (like pretty much everyone now) knows Bruce Allen is a raging a-hole?

Others noted that the fact that these emails are putting the focus on people like Gruden and Schefter, instead of Snyder and Allen (who is directly linked to both instances), is the point.

650,000 emails from WFT and so far the only people that got nailed were Gruden and Schefter – neither of which actually worked for the team or were part of the NFL's upper power structure.

Goodell watching the NFL journalists tear each other apart arguing over Schefter’s journalism methods instead of wondering why this is leaking instead of anything regarding Snyder pic.twitter.com/PVfsk2p5sG

With so many journalists digging into the story, which now includes a media ethics component, it’s likely we haven’t seen the last of this. But the NFL is being very specific about the types of emails it’s releasing and the many, many others it’s not. So whether or not we’ll ever see what Allen, Snyder, and other WFT employees had to say, remains to be seen.