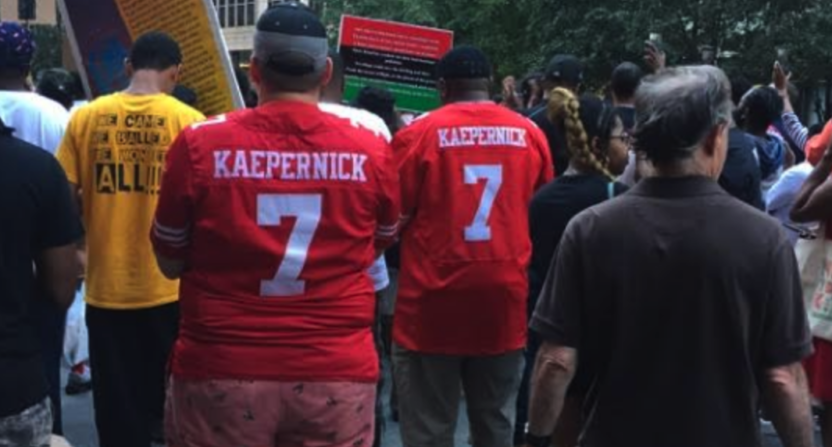 Hundreds of Colin Kaepernick supporters and demonstrators rallied in front of NFL headquarters at 345 Park Ave. in New York City on Wednesday afternoon to protest numerous items of social justice, most notably the belief that Kaepernick is being spurned and unsigned by the league’s 32 teams for his non-violent actions.

Rally leaders and organizers wrote a letter to the league, first obtained by BuzzFeed, and called on the NFL to take action, saying that “we will not be silent as the NFL actively participates in the ostracization of Mr. Kaepernick. This ostracization, we believe, is a retaliatory act of aggression against Mr. Kaepernick’s protest of the American National Anthem during the 2016 NFL season.” 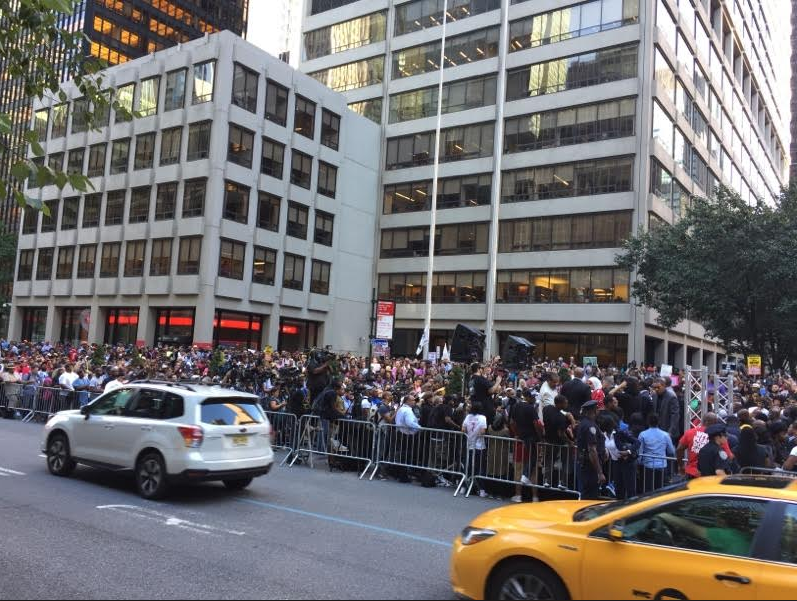 The leaders want the NFL to institute a policy guaranteeing its players the freedom of speech and expression in regards to social justice issues, as well as a unit “tasked with developing a league wide plan to improve racial equality.” The rally also called for a social media campaign to try to coerce league sponsor Verizon— who according to organizers spent $130 million on the NFL last season— to drop its advertising with the league until action is taken.

The full letter is below: 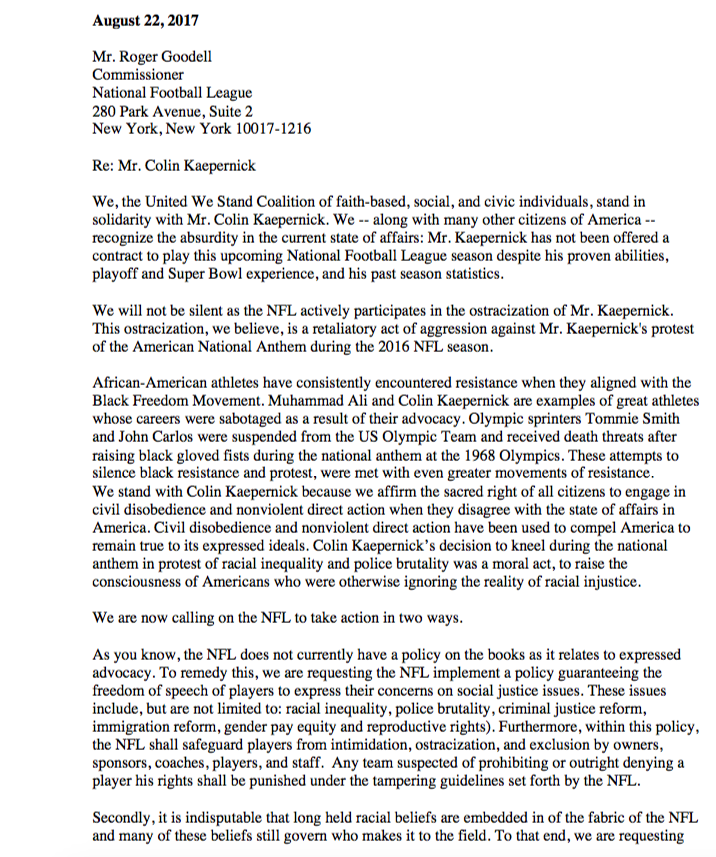 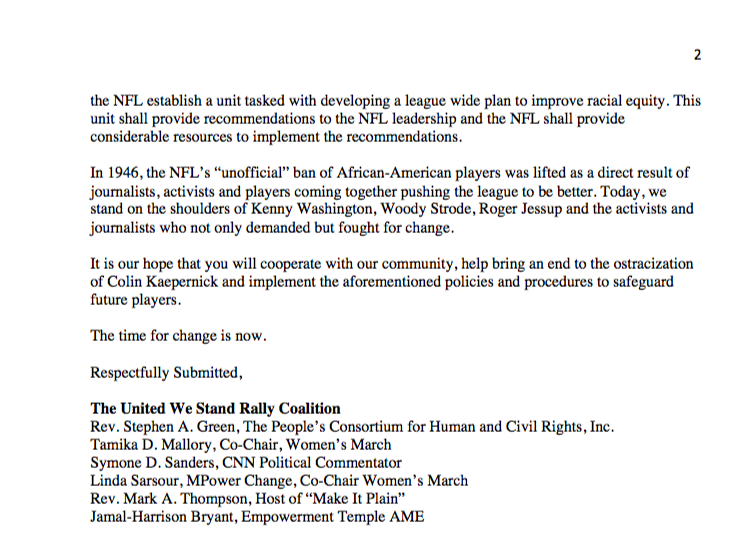 There was an extremely strong police presence at this peaceful protest, with dozens of NYPD officers surrounding the perimeter of the event and dispersed among the crowd as well.

Saint Cassius is a musical artist with a record label called Vinyl Crown. He created a pro-Kaepernick song titled Take A Knee, “that was inspired by the actions that Colin Kaepernick took this past season, but also the injustices we feel that are against him right now.”

Cassius noted that other NFL players are also taking a knee, with others standing with them in solidarity.

“He created an avenue for there to be a larger conversation, and I think that conversation is the inspiration,” Cassius said. “The symbol of taking a knee has been a victory symbol, and never meant to disrespect anybody or anybody’s views.”

Cassius hopes that this rally helps Kaepernick get signed by a team, and also sends the message that issues of racial inequality and social justice can’t just be swept under the rug.

Nyasia Brackett, 19, came up to the rally from southern New Jersey and was inspired by conversations she’s had with her family, who are big NFL fans, at the dinner table. Her mother works for a privately-owned prison and her stepfather works for the state of New Jersey, so she feels that her parents’ views are censored, further incentivizing her to come out to support Kaepernick.

“I want people to actually see that there are people who stand with Colin Kaepernick, even if players of his own race in the NFL don’t,” Brackett said, clarifying that they might hold back from their beliefs because they’re getting paychecks from the league.

She wants larger awareness about the issues impacting the black community. Brackett also said that the events in Charlottesville and President Trump’s response to it made her feel like she had to show up.

“If there was any doubt of me not coming, that was just wiped away,” she said. “After that, I had to come.” 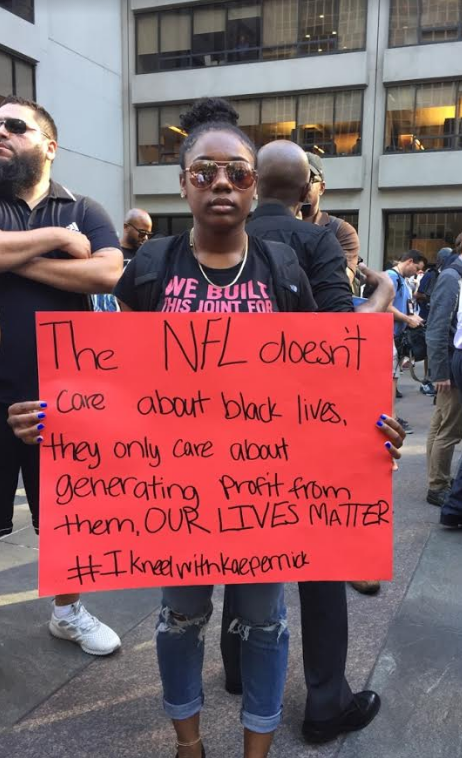 Craig Robinson, 45, came out from nearby Teaneck, New Jersey and was inspired by “the way he tried to support our culture and the men and women, unarmed, that were slain by police officers.”

Robinson believes that the league’s owners are purposely colluding in not signing Kaepernick.

“Collusion happens every day,” he said. “I think they all have the same feeling in terms of the distraction that he may bring, and some of the advertisers and how it may affect them. If they’re worried about their bottom line, then I think it’s good that we all come out here and affect theirs in another way.”

Robinson wants social justice issues to be more at the forefront of the general conversation, as opposed to the masses trying to change the subject, saying that Kaepernick is just a distraction. But as Robinson’s t-shirt signifies, Kaepernick is viewed in the community as a Civil Rights leader. 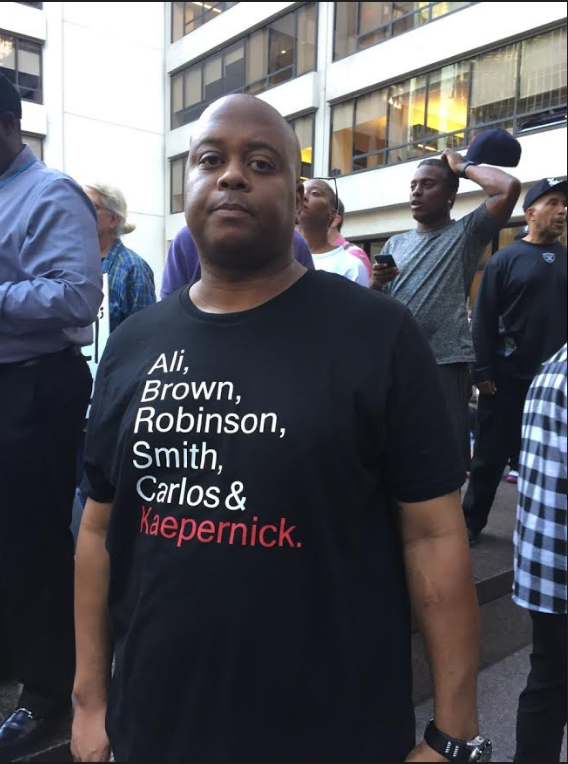 Lots of rally participants came out in Kaepernick gear, and the support behind him has kept him among the NFL’s top 50 jersey sellers despite not currently being on a roster. 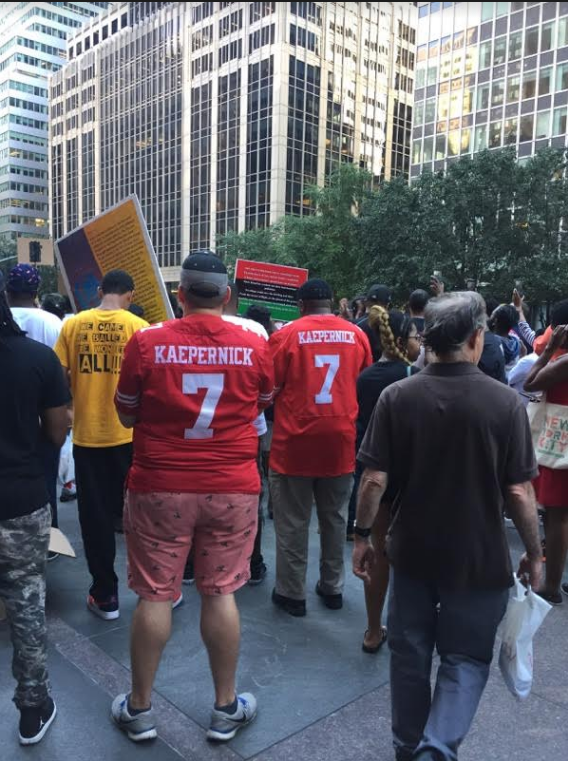 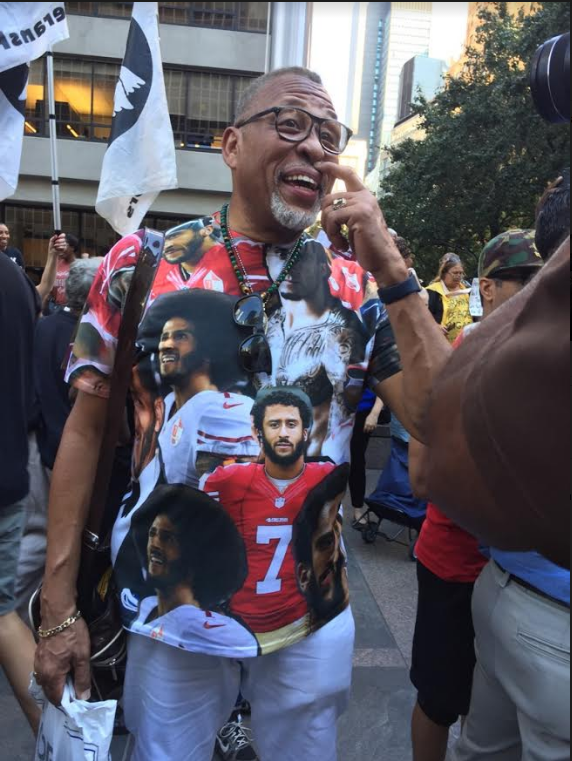 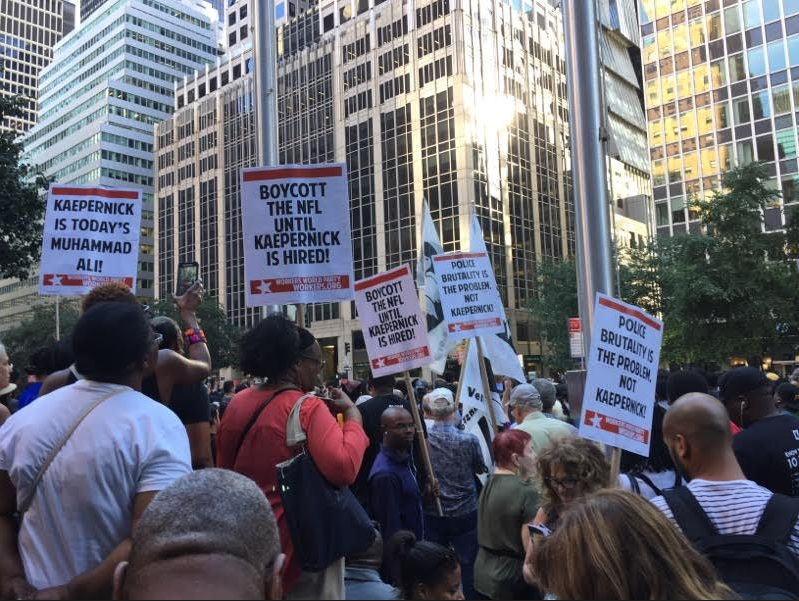 There were other, mainly anti-Trump groups who used this rally as a vehicle to promote and further their interests, but a vast majority of people attended to support Kaepernick and try to hold the NFL accountable for seemingly being against players’ rights to kneel during the National Anthem. 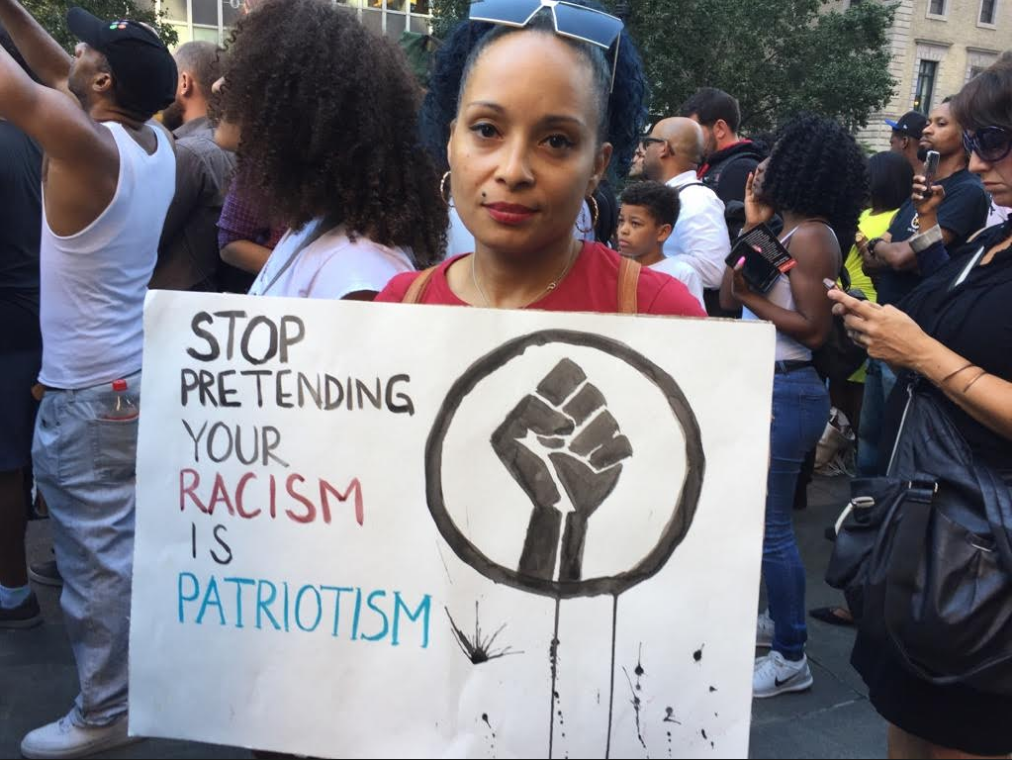 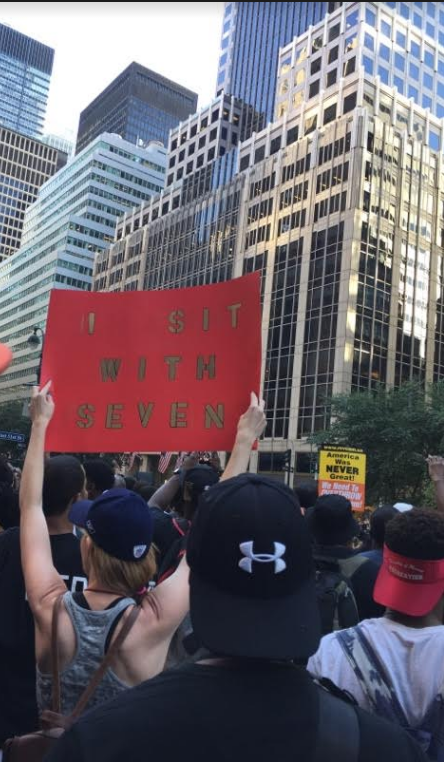 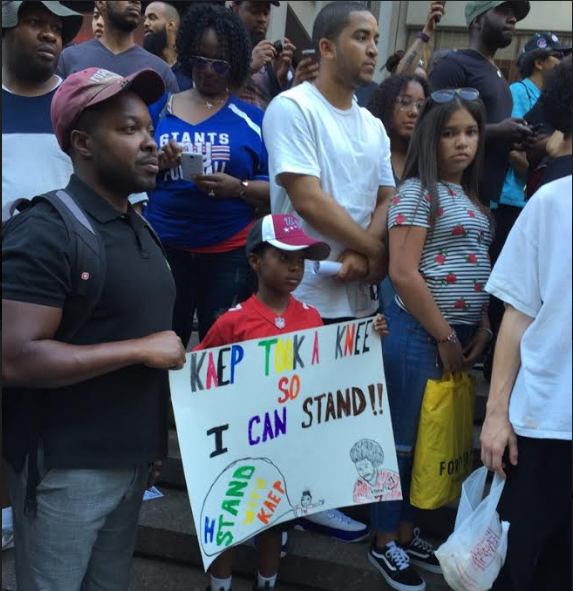 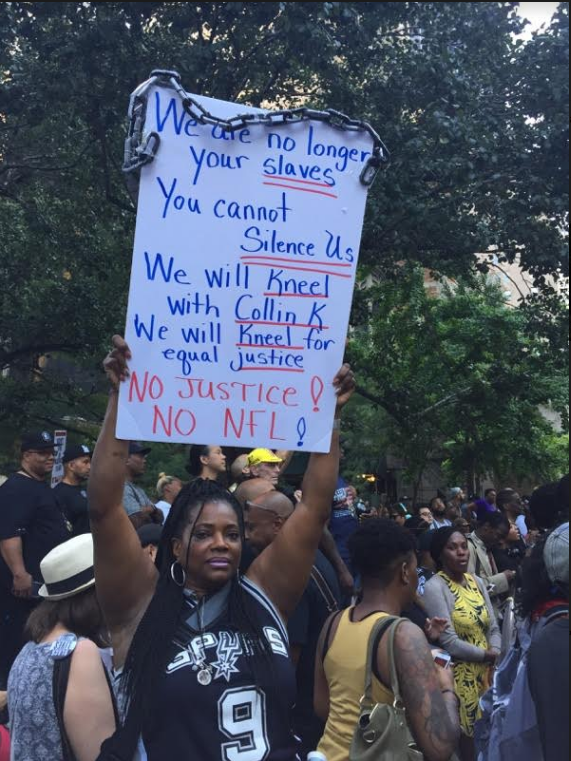 There was apparently a counter-protest across the street before the event, but a surprisingly small number of people were visibly against this peaceful rally.

And a counter protest across Park Ave….and the sign that says "Colin the Commie." pic.twitter.com/2cBqqhn8zJ

One dissenter is riling up the crowd here. #StandWithKaep pic.twitter.com/BdQwFHUaRQ

While this Kaepernick rally may not directly accomplish any concrete goals, like getting him signed by an NFL team, the fairly large, peaceful civil crowd and a large media presence ensured that a vocal minority would certainly be heard, seen and noticed as long as he remains unsigned just two weeks until the NFL regular season kicks off.