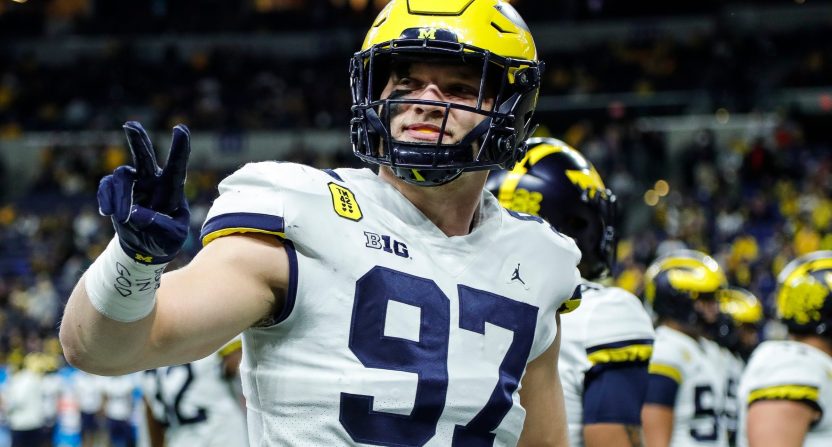 This NFL season isn’t even over yet but it’s already time to start thinking about next season because Mel Kiper, Jr. has released his first mock draft of the year. While the names might not be too surprising, for better or worse, there’s something about Kiper’s predictions that set the tone for the draft season ahead.

It’s no surprise to see that Kiper thinks the Jacksonville Jaguars should take Michigan Wolverines defensive end, Aidan Hutchinson. He also follows that up with the Detroit Lions taking Oregon defensive end Kayvon Thibodeaux, who found himself in some hot water last week with Alabama fans.

One position you won’t notice in Kiper’s Top 10 is quarterback. Despite the fact that it’s an ongoing need for many NFL franchises, Kiper doesn’t see any of the league’s worst teams taking a signal-caller amongst those Top 10 picks, which would be the first time a quarterback doesn’t go Top 10 since 2013.

That year the top QB picks were E.J. Manuel by the Bills (1st round), Geno Smith by the Jets (2nd), and Mike Glennon by the Buccaneers (3rd). Yikes.

Kiper does have a quarterback being taken just outside the Top 10, however. He has Liberty’s Malik Willis going 11th to the Washington Football Team. Others have suggested WFT will want to trade for an established quarterback this offseason, so we’ll have to see how that plays out.

Kiper also has Pitt’s Kenny Pickett, Ole Miss’s Matt Corral, and North Carolina’s Sam Howell going in the first round, so it’s not as though he doesn’t think QBs will get picked high.

Initial reactions to Kiper’s first mock depend on which team you care about and, as usual.

If the Broncos hire Dan Quinn, this pick makes sense.

In Seattle, Quinn had Bobby Wagner. In Atlanta, Quinn had Deion Jones (a R2 pick in 2016). Last year, Quinn had Micah Parsons.

Would not be a surprise to see him look LB. https://t.co/cWRW9aMHNl

Mel Kiper has Malik Willis going #11 in the draft – the first QB off the board. I personally love this pick. Malik would be a great fit for Washington and I would love to see him throwing bombs to AGG and McLaurin on Sundays. https://t.co/UNak6iZeVT

Kiper has #Jets taking Kyle Hamilton & Drake London which is pretty much the worst scenario I could ever come up with, so hopefully that's not how this plays out. https://t.co/KIM4odkNmQ

Plenty more mock drafts to come from Kiper and others before the actual 2022 NFL Draft which starts on April 28.