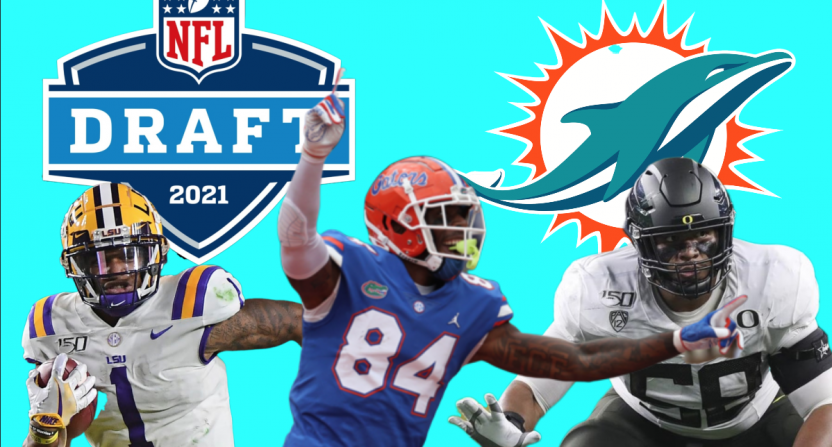 The Miami Dolphins traded down, then they dealt back up again.

After a trade with the San Francisco 49ers in which they exchanged the No. 3 overall selection in this year’s NFL Draft for No. 12, a third-rounder, and first-round picks in 2022 and 2023, the Dolphins kept dealing Friday afternoon.

Shortly after the 49ers deal was done, Miami then sent that No. 12 pick to the Philadelphia Eagles along with a fourth-round selection (No. 123) and a 2022 first-rounder. In return, the Dolphins got the No. 6 slot and a fifth-round pick (No. 156).

By initially trading out of the No. 3 spot, Miami appeared to indicate that it’s not interested in one of the top quarterbacks. Both Clemson’s Trevor Lawrence and BYU’s Zach Wilson (who put on a show for his pro day) will presumably be the top two selections and San Francisco will now likely take Justin Fields or whichever QB is available with the third selection.

All of this apparently points to the Dolphins being confident in Tua Tagovailoa as their quarterback for 2021 and beyond. Drafted with the No. 5 overall pick last year, Tagovailoa began the season on the sideline, presumably to learn the Miami offense and observe the NFL style of play while playing behind Ryan Fitzpatrick. Despite the veteran playing well, however, the Dolphins decided to accelerate to the future and made Tagovailoa the starter during their Week 7 bye.

In 10 games (nine starts), the former Alabama phenom completed 64 percent of his passes for 1,814 yards, 11 touchdowns, and five interceptions. That yardage total and his average of 6.3 yards per attempt were surely influenced by a lack of playmakers in the offense. DeVante Parker was Miami’s leading receiver last season with 63 catches for 793 yards and four scores, limited to only 11 starts due to hamstring and ankle injuries.

After today, Dolphins have some serious draft capital: pic.twitter.com/gun5mNnhTN

Yet by moving down to No. 12, the Dolphins may have put themselves out of reach for a playmaker, especially if they value LSU’s Ja’Marr Chase or Alabama’s Jaylen Waddle over teammate DeVonta Smith. That probably motivated Miami to move back up to No. 6, which puts them ahead of the Detroit Lions for the top receivers, including Florida tight end Kyle Pitts.

It also puts an offensive lineman like Oregon’s Penei Sewell or Northwestern’s Rashawn Slater in play, which would help Tagovailoa as well, if not more. The Dolphins could possibly also scare either the Carolina Panthers or Denver Broncos into making a deal for No. 6 if they convince either team that they could select one of the remaining quarterbacks (such as North Dakota State’s Trey Lance).

With so many possibilities available, including teams interested in trading up to get the player they want, the Dolphins have put themselves at the point where the 2021 draft’s first round could turn. Not to mention the extra first-rounders they picked up in the deal with San Francisco. That’s a far more advantageous position than Miami was in less than 24 hours ago.