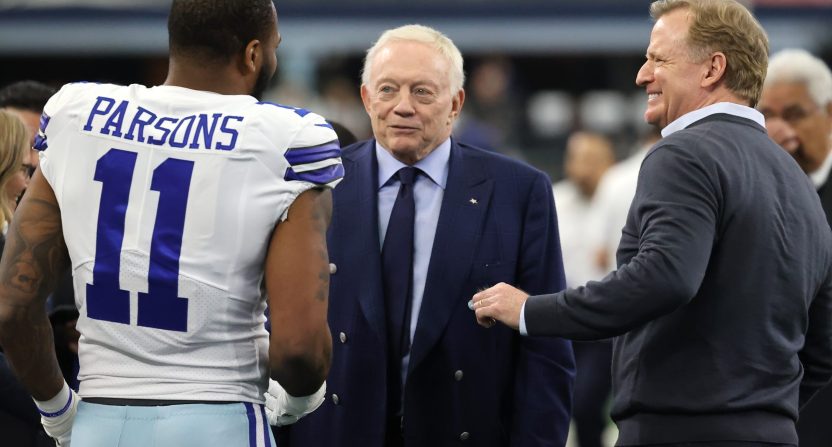 Envy is one of the seven deadly sins. And, according to linebacker Micah Parsons, if you hate the Dallas Cowboys and enjoy seeing them lose, it’s a sin you’re guilty of.

On Thursday, Parsons was being interviewed by Jim Rome, who asked the rookie linebacker why he thinks his team gets so much hate. For Parsons, it boils down to one simple theory — “They hate us cuz they ain’t us.”

“They’re jealous. They’re envious that regardless of what happens, we’re still a top organization. And people hate it. They hate it. They want their team to be the Cowboys so bad.”

That’s a theory. Is it a good theory or a theory like, the earth is flat is a theory? Let’s explore Parsons’ idea here.

Parsons just completed his rookie season, and since the Cowboys are not in Super Bowl LVI, he hasn’t experienced any of that glory first hand. But a one-year sample size is insufficient. Let’s dig a little deeper. Parsons was born in 1999. How does Dallas measure up with the rest of the league in that period?

The Cowboys have eight division championships in that time. That’s in a five-way tie for ninth in the NFL. In that same time, Dallas has made the playoffs nine times. That’s in a four-way tie for 11th in the league. Neither ranking does much to draw a lot of envy. Both rankings are comfortably in the upper half of the league, though. So the Cowboys’ resume holds up pretty well there. But what does their resume show in terms of playoff success? That’s a different story.

Since Parsons’ birth, 13 different franchises have won a Super Bowl. That number will increase if the Cincinnati Bengals defeat the Los Angeles Rams in Super Bowl LVI. In that same time, 21 different organizations have won a conference title. Neither of those lists includes Dallas, whose last Super Bowl appearance (and win) came in the 1995 season.

Dallas is one of only five teams to not reach one Conference Championship Game in that window. The others? Powerhouses like the Cleveland Browns, Detroit Lions, Miami Dolphins, Washington Commanders, and Houston Texans.

Revel in the envy, Dallas. That’s elite company to keep.

To win a Super Bowl, you need to either win either three or four postseason games, depending on whether you earned a bye week. Since 1999, the Cowboys have won a total of three playoff games. So, in that timeframe, every team that’s won a Super Bowl has at least matched Dallas’ postseason win total over 23 years in a single postseason. Four others have equaled the total without even winning the Super Bowl. Eight — soon to be nine — Super Bowl champions have exceeded it.

And this is not some small sample size that we’re drawing from. In 1999, Tom Brady had not yet debuted in the NFL. The Texans were not even a franchise yet. The Central Divisions still existed in both conferences. A lot has changed since 1999 in the NFL. One thing that hasn’t, Dallas hasn’t provided a lot for fans or players of other teams to be envious of.

And really, that’s why Parsons’ attitude is really why people don’t like the Cowboys. If it was a person on any other team (even one of the teams less successful than Dallas over the last 23 seasons), this would hardly be notable. It would be one player making an outrageous comment.

But Parsons’ attitude is prevalent with the Cowboys. They still call themselves America’s Team, a moniker they gave themselves. If you go to a game involving Dallas and take a shot every time a Cowboys fan says “How ’bout ‘dem Cowboys,” you will pass out cold before the coin toss. And that’s a quote that stemmed from the Cowboys NFC Championship Game win in the 1992 season. That kind of stuff tends to grate people.

Parsons is one of many players on the Cowboys with tremendous talent. It would hardly be a surprise if, at this time next year, we’re getting for a Super Bowl with Dallas representing the NFC. At that point, some fans may begin to feel envious. Until that happens, though, if you hear someone suggest you’re jealous of the Cowboys, start looking for a hidden camera. If you can’t find one, walk away from the discussion because the person you’re talking to does not respond to reason.