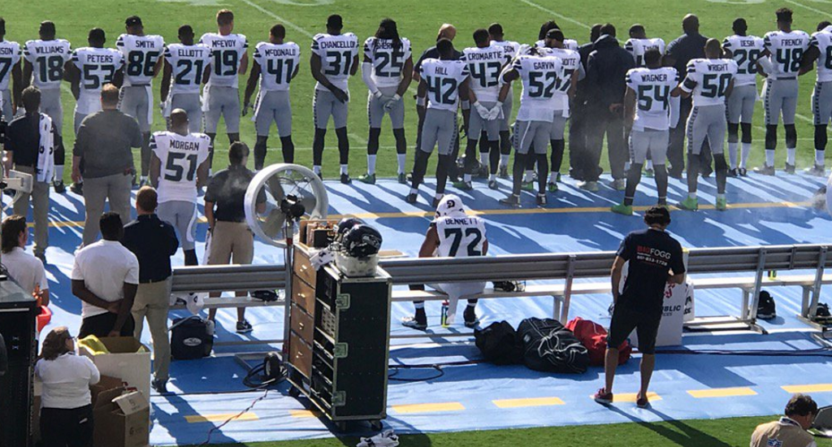 Seattle Seahawks defensive end Michael Bennett sat on the bench during the national anthem before the team’s preseason game against the Los Angeles Chargers on Sunday night at Stubhub Center.

After the game, Bennett said that he “wanted to be able to use [his] platform to continuously speak out on injustice.”

Bennett also said that he plans to sit during the national anthem for the entire season.

Bennett says plans to sit for anthem for entire season. Says he wants to use his platform to stand up for what he believes in.

This comes just over one week after Bennett — and teammate Richard Sherman — ripped NFL owners for not signing free-agent quarterback Colin Kaepernick (quotes via USA Today):

“I think it shows the racial divide in the league,” Bennett told USA TODAY Sports. “There are (accused) rapists and drunk drivers in the league. But he’s somebody who didn’t do anything to anybody. But you hear owners say, ‘We have to ask our fan base first.’ But the Giants kept Josh Brown (amid a domestic violence issue). Ben Roethlisberger has been accused of rape twice. The organization didn’t turn their back on him. They gave him a contract extension. Kaepernick didn’t do anything. That’s why racism is the biggest issue in America.”

Don’t expect the protests around the NFL to end anytime soon. Bleacher Report’s Mike Freeman tweeted that he texted with five NFL players who said they expect more players to protest, due to “league-wide outrage over Charlottesville, reaction to Trump.”

Texted with 5 players today who believe more will protest this season. Says league-wide outrage over Charlottesville, reaction from Trump.