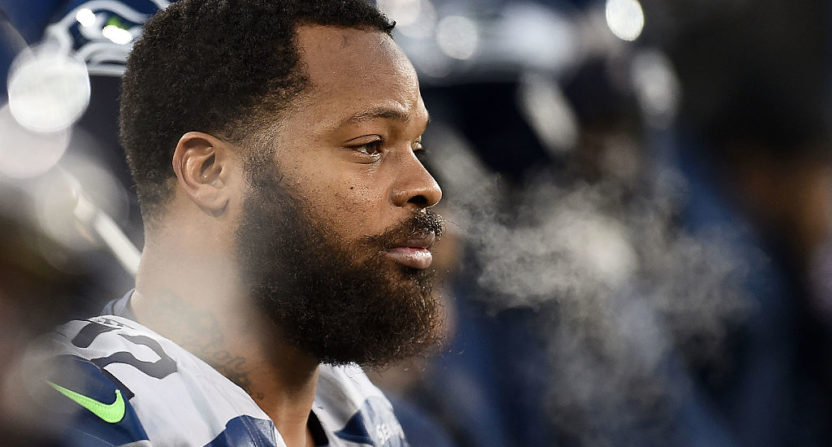 Seahawks defensive end Michael Bennett is all-in on the national anthem protests started by Colin Kaepernick last season, even though the movement has made Kaepernick an NFL pariah. He sat during the national anthem of the Seahawks’ first preseason game last week and told reporters he plans to continue protesting all season. Bennett and teammate Richard Sherman also eviscerated NFL owners for not signing Kaepernick this offseason.

But Bennett feels the protest movement has not gotten far, and he said Wednesday on ESPN’s SC6 he believes that’s because no white players have joined in:

“It would take a white player to really get things changed because when somebody from the other side understands and they step up and they speak about it, it would change the whole conversation because you bring somebody who doesn’t really have to be a part of the conversation to making themself vulnerable. I think when that happens, things will take a really big jump.”

We haven’t seen many white players chime in on the protests. Earlier this week, Saints veteran Zach Strief, a white offensive tackle, said he supports the protests but won’t participate, at least during the national anthem.

Bennett also said he hadn’t decided if he’d sit for the national anthem until last weekend’s controversial protests by white supremacists and neo-Nazis in Charlottesville:

“Over the weekend, seeing all the stuff going on in Charlottesville, so much violence, so much hate. I wanted to get back to the point of why we’re American citizens: the freedom, the liberty, and the equality. I wanted to make sure we never forget that. And really when I sit, I really just wanted to honor that, those founding principles that we’re all supposed to be.”

Unlike Kaepernick, Bennett has an insurance policy in case his decision to sit rubs the Seahawks the wrong way: a three-year contract extension he signed last year. But Bennett implied he would’ve sat during the anthem even in a contract year:

And for those who have taken national anthem protests as disrespect for the military, Bennett said military members who visited the Seahawks facility on Wednesday hugged him and told him they believe in his actions.