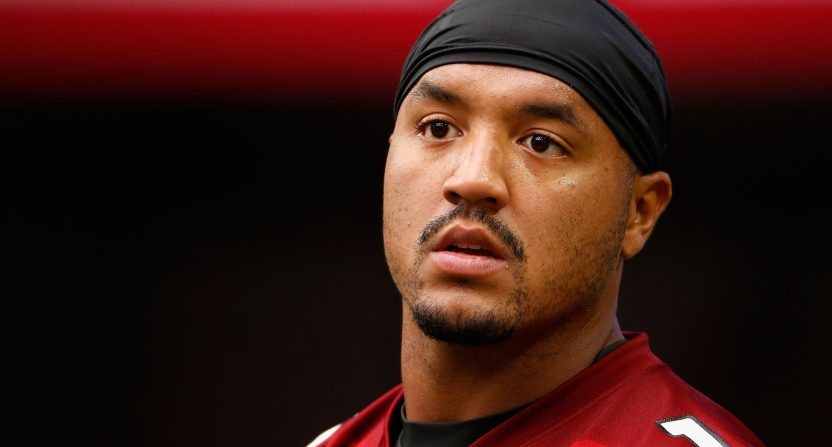 Michael Floyd was picked up by the Patriots at the end of the regular season after he was released by the Cardinals following a DUI arrest, and he was surprised by the situation.

“It hurt actually,” Floyd told ESPN Radio’s “Weekend Observations”. “It sucked, but I knew something was going to happen, but I did not actually think I was going to get released at all.”

“When I did, obviously because of the decision that I made, they made that decision. I went home from work and I felt bad about everything. I felt bad from the beginning, knowing I was in trouble, and I knew there was going to be some punishment. I just felt terrible.”

Floyd was with the Patriots when they won the Super Bowl but was a healthy scratch for the game itself. He did attempt to show remorse during the interview by saying he “100 percent” wished the incident hadn’t happened so he could have stayed in Arizona for the rest of the season.

“That feeling is great knowing that you can stay on one team for your whole career, so obviously it was heartbreaking the stuff that happened,” Floyd said. “If I could go back, definitely I would love to be where I was.

“I made a dumb decision to drive and I thought I was OK and I fell asleep,” Floyd added. “I think the whole world knows what happened after that: a dumb decision one individual makes. You learn from it and move on.”

Floyd played in three games for New England: their two final regular season games and the Divisional Round game against Houston. Though he was inactive for Super Bowl LI, he did kiss the Lombardi Trophy, and some on social media weren’t pleased when that shot appeared on their TV’s.

Damn I just realized ppl are really mad that I got a ring. I thought everyone would be happy for me. Oh well. I'm a champion!!

Floyd was the 13th overall pick in the 2012 NFL Draft and spent his first four and a half seasons with the Cardinals.