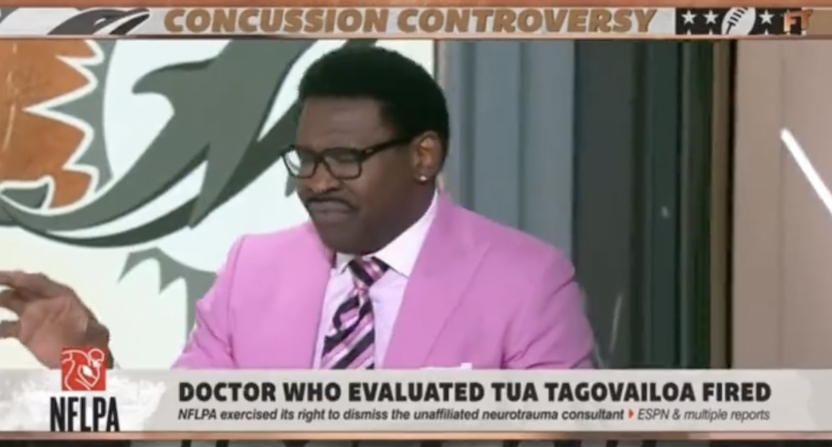 One of the biggest questions surrounding the Tua Tagovailoa situation is how much responsibility Miami Dolphins head coach Mike McDaniel bears for letting the quarterback play four days after suffering what appeared to be an injury with concussion-like symptoms. However, ESPN NFL analyst Michael Irvin is not here for your McDaniel slander.

After Tagovailoa was injured last Sunday, the team announced that his injury was back-related, but many outsiders scoffed at that given the way the quarterback wobbled off the field afterward. Then, on Thursday night, Tagovailoa suffered a scary-looking injury that had some clear concussion-like symptoms that caused him to leave the game on a stretcher.

Afterward, McDaniel was questioned about whether or not he and the team were taking concussion protocol seriously. The first-year head coach also admitted after the game that the quarterback was taking a flight back to Miami and that he was watching a movie during the flight, none of which is recommended behavior for someone who just suffered a concussion.

While the Dolphins are keeping Tua out of this weekend’s game against the New York Jets, many other NFL coaches and staffers have noted how they might have done things differently, inadvertently criticizing the decisions McDaniel has made.

On First Take on Monday, Irvin defended McDaniel by saying that many have gone “too far” in their criticism of the coach.

The realest thing said by anyone on ESPN or TV period, @michaelirvin88 . The attacks on Mcdaniel’s character are unwarranted and are not coming from a genuine place of “concern”. Thanks for calling it out Mike pic.twitter.com/omFTl391Bt

“Everybody was placing this on Coach McDaniel and I thought that was unfair,” said Irvin. “This is a first-year coach who has done an incredible job with the football team by putting players in a position to win and using their gifts and their talents. We had a very unfortunate situation (with Tua). For people to start questioning this man’s character, he has nothing in his history that says he has anything, anywhere where he would put someone in harm’s way like this.

“I thought that was too far. I thought that was wrong. He didn’t make the final decision. I’m glad they got rid of the people that they thought might have made a bad decision or made a mistake in the process of evaluating Tua. But we were absolutely out of line in pushing this upon Coach McDaniel.”

Irvin also said that he thinks “jealously” played a role in the criticism of McDaniel.

It’s true that McDaniel is not a doctor and that the NFL has put protocols in place that McDaniel appears to have followed, even if we’ve since learned that the medical decisions made may have been insufficient.

But McDaniel is also the head coach and he has the power to make his own decisions as well. Even if the doctors cleared Tua, he could have kept him out of the game as a precaution as well, something other NFL coaches have said they would do or have done. It’s not a cut-and-dry situation right now, and perhaps some of the criticism towards McDaniel is unwarranted, but Irvin is also being a bit aggrandizing too.