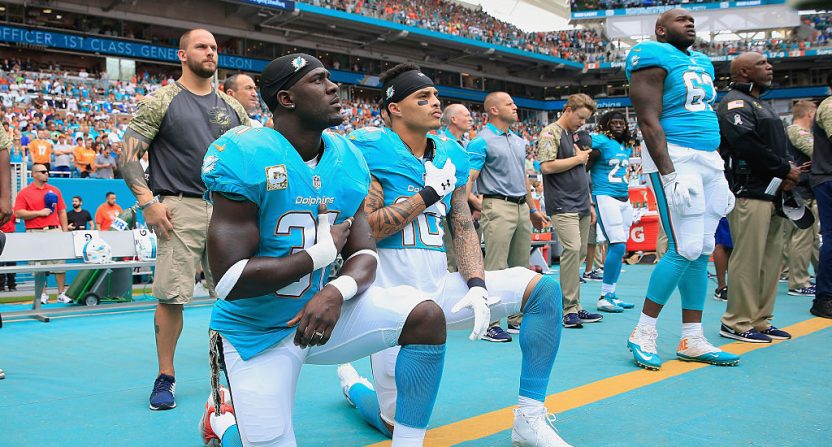 The debate over whether or not to kneel during the National Anthem before NFL games last year was a big one for a lot of NFL players across the league. However, players for one team apparently had an easier decision to make after they received the blessing of their owner to kneel as they please.

On Monday night, Miami Dolphins defensive back Michael Thomas spoke at a town hall event. During the event, he discussed his decision to kneel during the national anthem during the 2016 NFL season. At that point, Thomas broke some news when he told the crowd a very important point about the kneeling.

Before the season opener in Seattle, Dolphins owner Stephen Ross was in the locker room and gave players wishing to kneel during the anthem his blessing.

During an offseason where people are speculating whether or not Colin Kaepernick’s decision to kneel is costing him a job, the news that one owner gave his team his approval to protest by kneeling is big news.

The season opener for the Dolphins was a tricky one. Thomas wanted to show solidarity with his former teammate Kaepernick and protest. However, he was worried how he would be received since the game was on September 11th. As a result, he asked his team’s owner for permission and Ross responded with a resounding yes.

Ross has since said he supported the player’s decision to kneel during the anthem, but on Monday, Thomas explained for the first time in public how it all played out.

“I remember that like it was yesterday,” Thomas said after meeting with high school students  at Nova Southeastern University. “With everything racing through our minds, trying to decide if that was something we would actually go through with, of taking a knee … September 11th — that’s a whole different aspect.

“I saw Mr. Ross come in the locker room. I’m going up to him, trying to explain to him in a way, letting him know, like, ‘Look, we’re thinking about doing this, thinking about taking a knee.’

“And for him to stop me and say, ‘Look, Mike, whatever y’all choose to do today, I’ve got y’all’s back 100 percent’ — that’s a testament to what type of person he is, how he truly feels about equality for all, and the efforts he’s made with the RISE program. It’s great to have the owner of the Dolphins have that perspective.

“It’d be great to see more owners take after him.”

Thomas was speaking on a panel about social injustice with wide receiver Kenny Stills, who also kneeled during the anthem last season. The event was setup by Ross’s RISE (the Ross Initiative in Sports for Equality) and the Jason Taylor Foundation. RISE was founded in 2015 and aims to use sports to improve race relations and help drive social progress.

While it’s unlikely other players will come out of the shadows to discuss if they received permission from their owners to kneel, it would be interesting to see if many other owners played a role. The kneeling during the anthems was a major issue and debate across sports and outside of sports as well last year. People criticized the players who knelt, however at the end of the day one could argue their goal was accomplished because while people did criticize players for kneeling, many people also talked about racial issues in society, one of the goals of the protest.