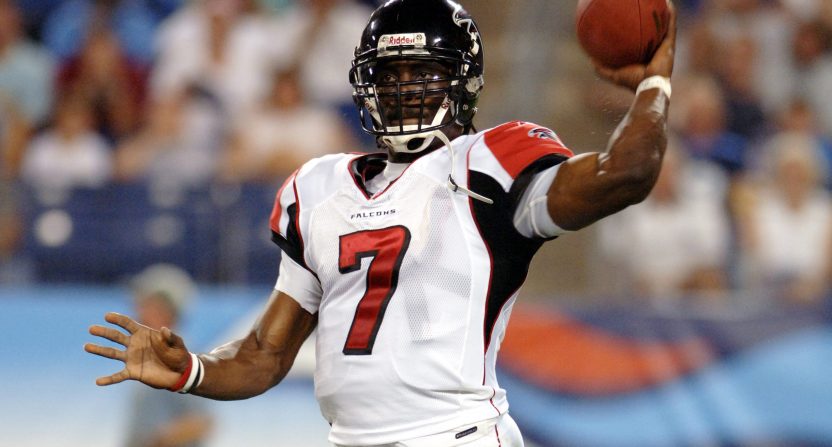 It’s not unusual for former players to want to get into coaching upon retirement, regardless of sport. Whether it’s a love of the game, or a fear of life beyond the locker room, or some mixture of the two, it’s a common path, and one that Michael Vick wants to walk.

Vick is an odd candidate for the coaching ranks, perhaps most obviously due to his 2007 conviction for his role running a dogfighting operation, for which he served 18 months at Fort Leavenworth.

Nevertheless, Vick went on Adam Schefter’s podcast and expressed his interest in coaching:

“I would love to coach in the National Football League one day,” Vick told ESPN’s Adam Schefter on his “Know Them From Adam” podcast. “… At some point, I’d definitely love to help work with young quarterbacks and develop them and still compete, you know, with the team and with the coaches.

“It’s another way to chase a championship. You know I’m not done. I’m not done by any means. You know I didn’t get the championship when I was playing, so, hey, maybe I’d get lucky one year, maybe fortunate enough to join the staff that may be good enough.”

Vick is a tough case for a potential coaching slot, perhaps most notably because his skillset as a player was never built around fundamentals. He could obviously throw the ball wherever he wanted, of course, but what made him special was his running ability, and the ability to extend plays that were breaking down; he’s the all-time leading QB rusher in the NFL for a reason, after all.

Still, that doesn’t mean he can’t coach, or wouldn’t be a good one, but it feels like for a team to be willing to bring on Michael Vick, even a fairly rehabilitated version (both image-wise and, it seems, personally), his value as a coaching asset would need to be far more assured than it is.

Vick undercuts his own plan a bit as well, when describing why he’d prefer to coach in the pro or college ranks:

“I think my heart is really into teaching, you know, the game of football,” Vick told Schefter in the podcast. “I feel like I’ve learned so much from so many great coaches over the years. You know, I don’t want to bottle up a lot of knowledge, and [I] really can’t relay the messages that I want to relay to a high school kid because … you don’t have to dumb it down, but you can’t be as complex. And I get that.

So [at the] collegiate level or professional level, you can express ideas. You can go into detail. You know you can coach hard, and that’s what I want to do.”

Coaching is the ability to relay that information to people with different capacities for understanding. It’s hard to envision Vick getting a job at the professional level, and while you might think his presence could be an asset for recruiting purposes in college, his best seasons happened when current recruits were very, very young. Still, a smaller college program bringing him aboard is probably his best hope.

Vick played parts of seven seasons after that prison sentence, too, so anything is possible.