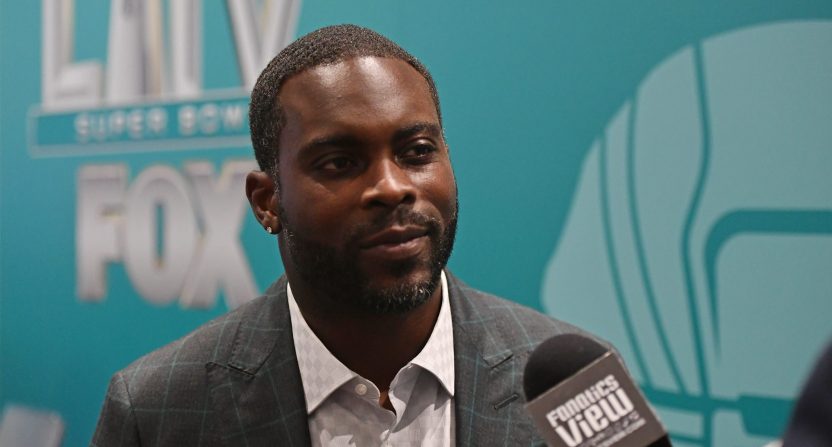 While the specifics of their situations were very different, Michael Vick probably understands the situation that Colin Kaepernick finds himself in attempting to return to the NFL after a long hiatus.

Vick was an NFL superstar with the Atlanta Falcons before his career came to a crashing halt in 2007 when he pleaded guilty to his involvement in a dog fighting ring. After spending 21 months in prison, the quarterback returned to the league in 2009 and was able to revitalize his playing career for seven seasons.

Kaepernick did something that Vick was never able to do, leading his team to the Super Bowl during his six seasons in the NFL. But his career came to a halt after his national anthem protests and he hasn’t been in the league since 2016. The 34-year-old has spent the last few months attempting to prove that he can still play and even got a workout with the Las Vegas Raiders, though he remains unsigned as of yet.

There are plenty of people with opinions about whether or not Kaepernick can make it happen, but Vick’s opinion likely carries a bit more weight given what he went through. Speaking with Outkick 360 on Thursday, the Fox Sports analyst and Level Sports Group partner said that he thinks Kaepernick can still play in the NFL, though it’s going to take some adjusting.

“I think the biggest thing for me was physically being able to perform, especially the first year I was back,” said Vick when asked what it takes to return to the NFL after a hiatus. “I took it for granted. I really thought that I’d be able to come back to the game and play the game at a high level and not miss a beat and that everything would flow smooth. But I found out really quickly that the game was way faster offensively. A little more complex. I had to really take that year off in football to get my strength and conditioning back up.

“It’s just different movement. It’s different than when you’re just working out…and you throw the football around and drop back. You’re practicing with guys coming at you. You gotta make moves. You gotta think. It’s a little more rigorous. Not to say that Kaep can’t do it, it’s just gonna be a little tough. But I think Kaep is young enough where he can survive it. He’s only 34-year-old. He’s got some good years left in him and I wish him all the best.”

As for whether or not he could be a starter in the NFL, Vick said that it might be possible down the road but it’s not likely at first.

“I think it’ll happen in due time,” said Vick. “Typically with a quarterback in Kaep’s position, he’s been out of the league for a couple years, and he hasn’t played in a long time. It’d probably be smart to come in in a backup role and just play that backup role for another two or three years. And when you get an opportunity to start, you show that you can play.

“Everything in the NFL has to be earned and I think Kaep understands that it’s highly competitive… I think, in time, he could become a starter, whether it’s through injury or outplaying somebody ahead of you, it can be done. So I would err on the side of staying optimistic about my opportunities that could come and enjoy the game when he get back.”

It’s certainly a very different outlook Vick has for Kaepernick now than he did in 2017 when he said Colin would probably need to cut his afro if he wanted to play in the NFL.