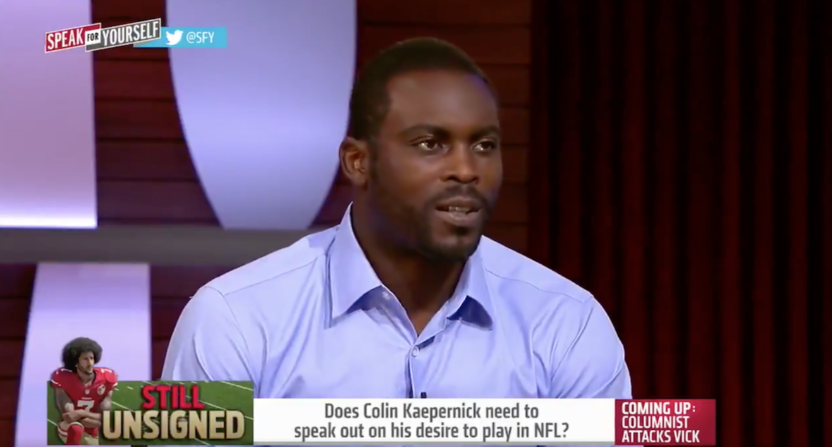 As we approach the end of July, quarterback Colin Kaepernick still has not found a home in the NFL. Some think that’s because of his on-field performance, others think it’s because of his off-field pursuits for social justice. Sign ex-NFL star Michael Vick up for the former camp, but with a twist.

Vick joined FS1’s Speak For Yourself on Monday and said Kaepernick has to get rid of his afro if he wants to land a job:

"First thing we got to get Colin to do is cut his hair." — @MikeVick advises Kaepernick on rebuilding his image pic.twitter.com/YENvUPOIgP

“First thing we got to get Colin to do is cut his hair. Listen, I’m not up here to try to be politically correct, but even if he puts cornrows in it, I don’t think he should represent himself that way in terms of just a hairstyle. Just go clean cut. Why not? You’re already dealing with a lot of controversy surrounding this issue. The most important thing he needs to do is just try to be presentable.”

Now, there could be a sprinkle of truth to that. Many people will recommend a shave and a haircut before any job interview. But for Kaepernick, cutting his hair could constitute losing part of his identity. Here’s what his barber, Ralphie Stevens, told USA Today last September:

“I wish I could cut it,’’ Stevens told USA TODAY Sports. “I wish I could just transform him back to what Kap was because now he’s a different person. … If I cut it and put him back in place to what he was before, oh yeah, that’s what I want to do, I want to bring him back.’’

But Stevens, who like Kaepernick is African American, said the current hair style has helped Kaepernick’s transformation from soft-spoken quarterback to social activist who has refused to stand during the national anthem.

“A lot of people don’t think he’s black because his foster parents are white,’’ Stevens said. “So when he grows his Afro out … I feel like that’s definitely making a statement.”

I don’t doubt that going with a “presentable” haircut could improve Kaepernick’s chances of getting signed, but that’s not a solution. That just digs deeper into the problem of what a stereotypical quarterback should look like in the NFL.

Here’s more from Vick on the image Kaepernick portrays compared to the vibe he gave off with more of a “clean-cut” look when leading the 49ers to a Super Bowl appearance in the 2012 season:

“Perception and image is everything. Listen, this is not the Colin Kaepernick that we’ve known since he entered the National Football League. And I’m just going off my personal experiences. Listen, I love the guy to death. But I want him to also succeed on and off the field. This has to be a start for him.”

Vick said this advice comes from his personal experience. He cleaned up his image in order to return to the NFL … but that was after 18 months in prison for his involvement in a dogfighting ring! Even if you consider Kaepernick disrespectful for kneeling during the national anthem, there’s still no comparison between the two.

Vick went on to say he thinks Kaepernick’s production the last two seasons has also scared teams away. While he’s regressed since the heyday of his first year as a starter, as Bleacher Report’s Doug Farrar broke down, he really wasn’t that terrible last season. His performance certainly warrants at least a backup gig. He completed 59.2 percent of his passes for 16 touchdowns and four interceptions with a 90.7 passer rating.

Meanwhile, Giants wide receiver Brandon Marshall tweeted that Kaepernick is better than every quarterback signed in free agency this offseason.

It's time my Brother @Kaepernick7 gets signed. He's better than every QB that got signed in Free agency

But according to another Bleacher Report piece by Mike Freeman, most NFL executives are turned off by Kaepernick either because they disagree with the message of his protests or are simply concerned about the attention those protests may bring to their franchise next season.

Now, with all that said, we’ve seen NFL teams sign players that, in theory, should be much more controversial figures while leaving Kaep out to dry. Last year, Giants owner John Mara re-signed kicker Josh Brown after Brown admitted he abused his wife. That decision received some outrage, but ultimately the news blew over quickly.

Unlike Vick and Brown, Kaepernick didn’t create controversy by breaking the law. So let’s get him back in the NFL, afro or not.