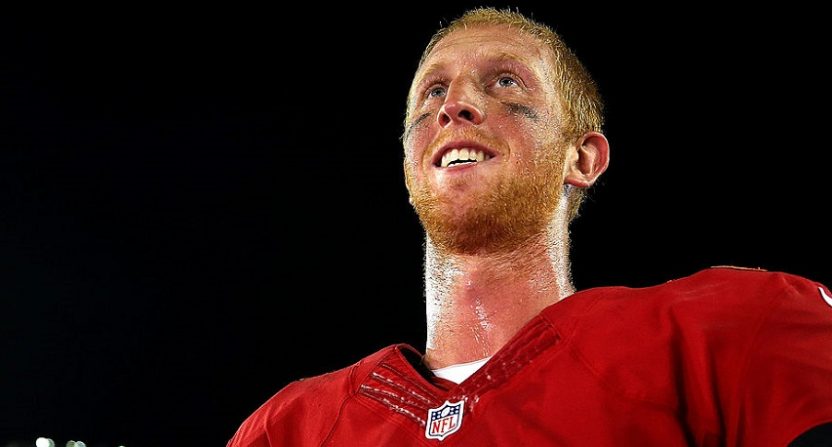 The Chicago Bears’ handling of their quarterback situation, especially in light of the decision to draft Mitchell Trubisky with the No. 2 overall pick in Round 1 of Thursday’s NFL Draft, looks worse by the day. While Trubisky could indeed turn out to be the Bears’ quarterback of the future — the team certainly has that expectation after trading four picks to move up one spot from No. 3 to No. 2 to select him — the team’s present has become a soap opera.

On Friday, ESPN’s Chris Mortensen reported that Bears head coach John Fox hadn’t been informed of the decision to draft Trubisky (and trade a load of draft picks that could have helped the roster) until a couple of hours before Thursday night’s proceedings. So perhaps it shouldn’t be a surprise that Chicago’s presumed starting quarterback for the upcoming season was completely unaware that the team was drafting another player at his position until the moment it happened.

According to the Chicago Tribune‘s Rich Campbell, Glennon had no idea that the Bears were planning to select Trubisky with their top draft pick. Even worse, he was part of the team’s draft night festivities, asked to attend and mingle with fans on the club level. So Glennon got to witness how Bears fans reacted to drafting Trubisky first-hand.

This was the reaction of #Bears fans when the team picked Mitchell Trubisky at No. 2. pic.twitter.com/CSITSDFLKu

For all we know, Glennon joined in with the head-slapping and raised arms of disbelief. That reaction wasn’t captured on camera, obviously. But he had every reason to wonder why the team would invest so much in an unproven quarterback after signing Glennon to a three-year, $43.5 million deal. That was the question on everyone’s mind after Trubisky was Chicago’s first-round selection.

Yet many were also quick to point out that Glennon’s three-year deal is more like a one-year contract with two team options. If the Bears decide to cut Glennon before the 2018 season, he’ll count $4.5 million against the salary cap. But that’s much less than the $16 million Chicago will owe Glennon if he makes the team, which is a bit high for a backup quarterback. That’s presuming, of course, that Glennon is the backup. Maybe Trubisky still won’t be the starter by then. If that’s the case, however, many questions are going to be raised about their first-round draft pick.

Considering the terms of Glennon’s contract, it’s entirely possible that he knew the Bears intended him to be a stopgap until the team’s future signal-caller was ready. Yet it’s more likely that Glennon bet on his own talent and figured he would play well enough to earn the full contract he signed. More importantly, he surely thought he would get the opportunity to do so.

Sources told Campbell that Glennon “felt as though he had been cheated on” by the Bears’ decision, and it’s rather clear — publicly so — that the team doesn’t believe he’s a long-term solution at quarterback. Many would say that it was apparent that was the case all along. But the question is what the Bears told Glennon before they signed him. Maybe he was informed that the team would still draft a quarterback, but No. 2 overall? And trading four picks to move up one spot, a move that Chicago probably didn’t have to make if no other team was pursuing Trubisky at that point of the draft? (Even 49ers general manager John Lynch couldn’t believe it.)

No one is going to cry for Glennon, who’s still going to be paid $18.5 million for his troubles. And he still presumably has a chance to fight for the starting quarterback job beyond 2017. Yet the reality is that the Bears didn’t draft Trubisky to be a backup by his second year. Giving him a year to observe, learning in practice and from the sidelines, is a smart move — at least on the surface.

But did Chicago general manager Ryan Pace unnecessarily alienate his presumed starting QB and maybe create questions for future free agents that the team might pursue? None of that will likely matter if Trubisky is as good as the Bears believe he is. And if he’s not, no one involved in the decision to draft him — and not tell anyone else who might like to know — will probably be around to deal with the long-term consequences.

2 thoughts on “Mike Glennon had no idea Bears were drafting Mitch Trubisky, felt cheated by decision”