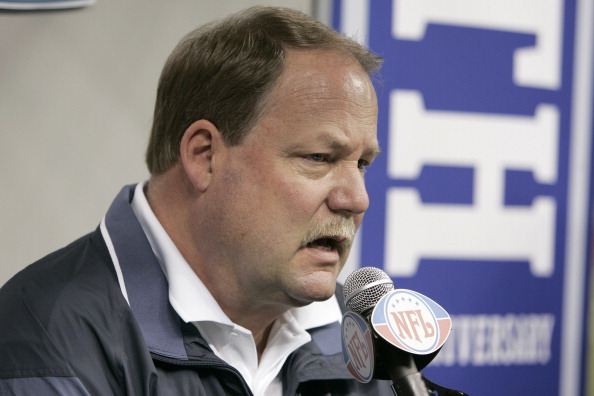 Has any franchise had a worse 2015 calendar year than the San Francisco 49ers?  Their roster was gutted by everything from shock retirements to free agency to releasing troubled talent.  Head coach Jim Harbaugh was kicked to the curb and all he did was resurrect Michigan into a national program almost overnight.  And the career of franchise QB Colin Kaepernick, who was once proclaimed to have the potential to be one of the GREATEST PLAYERS IN NFL HISTORY according to Ron Jaworski, now looks like it’s on life support.

Other than that, life is great for the 49ers!

All those troubles makes it somewhat odd that a Super Bowl winning head coach would want to inherit the disaster in San Francisco and try to clean up that mess.  Alas, SI’s Robert Klemko and Mark Purdy of the Mercury News both reported that Mike Holmgren has been angling for the 49ers job.

Coaching carousel wild card: Per source, Mike Holmgren has, for the second time in as many years, expressed interest in the 49ers HC job.

A good source tells me that Mike Holmgren would be interested in 49ers coaching job if it becomes available. But will it? Column to come.

Naturally, it’s worth noting that the 49ers still have a head coach in Jim Tomsula and the team hasn’t shown a great rush to give him the axe after just one 4-11 season.

Moreover, would the team even be interested in Holmgren?

Look, it’s been a looooooong time since Holmgren won a Super Bowl with the Green Bay Packers in 1996.  Since then, he had a pretty good coaching tenure with the Seattle Seahawks, reaching another Super Bowl… but he hasn’t been on the sidelines since the 2008 season.  Furthermore, Holmgren’s last experience with an NFL team was in Cleveland’s front office from 2010-2012 and like anyone else who spends any time with the Browns, it was an abject failure.

Holmgren has long ties to the 49ers franchise, coaching on some legendary staffs, serving as quarterbacks coach from 1986-88, then getting promoted to offensive coordinator from 1989-1991 before leaving to take over in Green Bay. Still, a veteran head coach who hasn’t been on the sidelines in almost a decade doesn’t seem like a great match with a franchise where Blaine Gabbert might be your quarterback of the present AND future.  But when it comes to the 49ers, nothing would be surprising after what that franchise has been through over the past 12 months.  Maybe George Seifert is available, too.