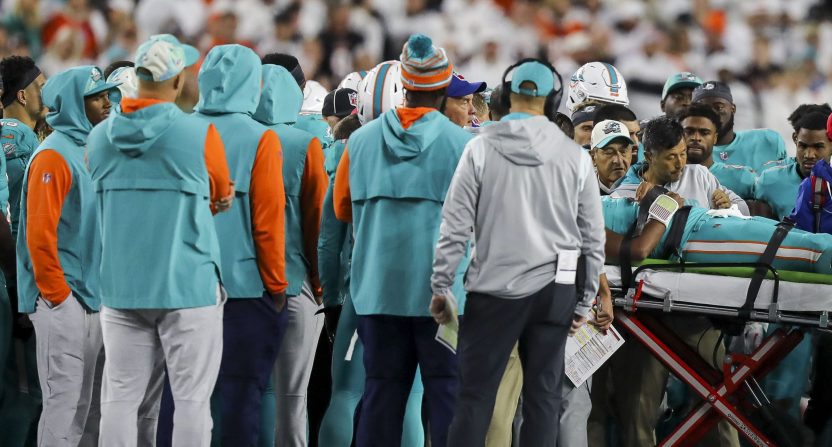 It was an absolute sum of all fears moment on Thursday night when Miami Dolphins quarterback Tua Tagovailoa was thrown violently to the ground, smacking his back and head on the ground, and stayed down while his body contorted in apparent agony. Just four days after another injury that appeared to many to be concussion-related, NFL viewers watched in horror as he was taken off the field on a stretcher.

Miami Dolphins quarterback Tua Tagovailoa has been stretchered off of the field in Cincinnati.

Almost immediately, the NFL world was furious with the Dolphins organization for even allowing Tua to be on the field just days after a significant injury. Many were already suspicious of the diagnosis that Tua suffered a back injury on Sunday. The NFLPA was still amidst an investigation into how the quarterback made it through concussion protocols so fast and was able to return to that game. The NFL has claimed that all protocols were followed.

Naturally, Miami head coach Mike McDaniel was asked about the situation at his post-game press conference. The first-year coach tried to make it abundantly clear that the franchise did not misreport Tua’s initial injury and that all protocols were followed as required. He also said that had it been diagnosed that Tagovailoa had suffered a concussion on Sunday, he would not have been allowed to play.

Mike McDaniel explains why Tua was cleared to play. Says he got all checkups, including independent doctor clearing. They didn’t misreport injury.

“We don’t mess with that. Never have. As long as I’m the head coach that’ll never be an issue you guys will have to worry about.” pic.twitter.com/TjTcIPWLFF

“Yeah, otherwise we would have reported him having a head injury,” said McDaniel when asked about whether or not the franchise followed proper process with Sunday’s injury. “I mean, that’s why the NFL has those protocols. Like, every single NFL game that is played, there’s an independent specialist that specializes in the specialty of brain matter.

“For me, as long as I’m coaching here, I’m not gonna fudge that whole situation. If there’s any sort of inclination that someone has a concussion, like, it was a concussion protocol, it’s very strict. People don’t vary or stray. We don’t mess with that. Never have. As long as I’m the head coach that’ll never be an issue you guys will have to worry about.”

The hard part for a lot of NFL viewers and impartial analysts is that the video seems to tell a very specific story about what happened to Tua on Sunday and what happened to Tua on Thursday. That story doesn’t seem to jibe with what the NFL and the Dolphins have said so far and, truth be told, there isn’t a lot of faith in the league and its franchises to always do the right thing when money is on the line. (See: Watson, Deshaun).

We’ll see in the coming days what the prognosis is for Tagovailoa and where the Dolphins and NFL go from here. It’s hard to imagine that either will be able to just say that Tua is fine and move forward, and you can expect the conversation about concussions, CTE, and the health of football players to be pretty loud in the coming days.