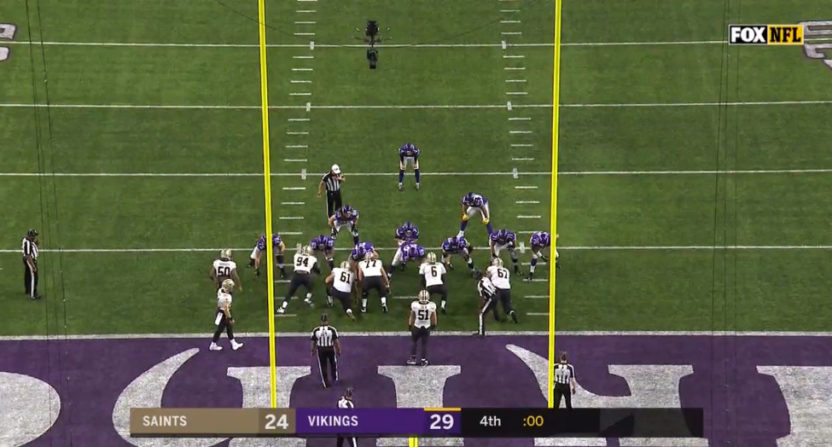 The New Orleans Saints suffered a heartbreaking loss to the Minnesota Vikings in the divisional round of the NFL playoffs Sunday thanks to a walk-off 61-yard touchdown.

Those who bet on the Vikings -5.5 then suffered a heartbreaking loss of their own, with the extra point delayed almost 10 minutes thanks to everyone milling around on the field and the Saints leaving for the locker room, and Minnesota eventually opting to kneel rather than kick the extra point, making the final 29-24 and giving those who took New Orleans and the points a win.

But the amount of time it took to set up a final play that didn’t affect the final outcome, and which play-by-play commentator Joe Buck called “the most anticlimactic moment in the history of the NFL” (Buck must not have too many guys in the desert), had many wondering why the Vikings were forced to attempt an extra point in the first place, as they wouldn’t have had to do that if they won in overtime.

According to Fox rules analyst Mike Pereira (a former NFL referee and vice-president of officiating), it’s thanks to point differential, which matters in the regular season from a playoff tiebreaking perspective:

That’s not a good reason to have this rule in the playoffs where point differential no longer matters (except for gambling), but it’s presumably something where no one realized that it would be useful to have a different playoff rule until now. After all, this was the first-ever NFL playoff game with a touchdown scored with no time on the clock in the fourth quarter. But now that it’s shown up, it might be worth revising this a bit, especially in cases where one team’s up by more than two points as the result of the touchdown so there’s no chance of even a blocked extra point affecting the outcome.

Pereira went on to make that case himself:

That being said, I would like to see a rule change that would elimate the try extension if it occurs in the playoffs. Revert to the college rule which does not extend for the try if the team that scores a TD is more than 2 points ahead. Last night was a mess. Make sense?

However, some might argue for eliminating those unnecessary converts altogether, even in the regular season. Points only come into play in the seventh tiebreaker, and it seems unlikely that one or two points are too likely to make a difference even there.

Some gamblers in particular might appreciate that, such as the guy who lost $8,000 thanks to an unopposed Patriots’ two-point conversion against the Bills in 1998. Overall, though, it’s understandable why the NFL has this rule in the regular season (and, as CBS’ Will Brinson pointed out Sunday, it appears that the officials could have ended this sooner by just having the Vikings kick or kneel unopposed) thanks to those concerns about point differential (and you’d really hate to see a playoff spot someday decided by a team not kicking the convert thanks to a new rule, even if that’s improbable.

But it feels quite unnecessary to do this in the playoffs. Maybe the NFL will change that going forward, letting games end sooner and not giving gamblers false hope.

12 thoughts on “Mike Pereira: Vikings were forced to attempt XP because of regular-season point differential rule, not the spread”