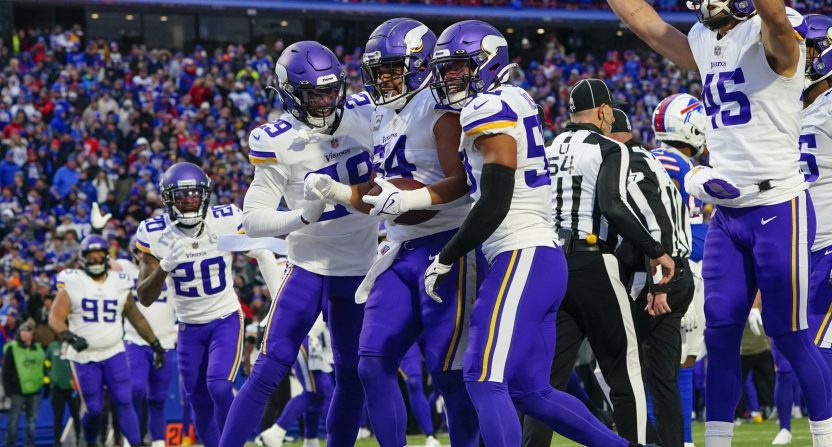 The Minnesota Vikings have been far and away the best team in the NFC North this season, with the rest of the teams in the division well below .500 on the year.

Things are going great in Minnesota, with an 8-1 record on the season thus far, and their dominance could translate to a very early playoff berth.

According to NFL Network’s Andrew Siciliano, the Vikings could clinch the NFC North as early as Week 12 if they win their next two games and get a little help within their division.

The Detroit Lions would also need to lose their next two games against impressive teams in the New York Giants and the Buffalo Bills.

The Green Bay Packers would need to lose next week to the Philadelphia Eagles following their loss on Thursday night to the Tennessee Titans.

Considering the tough competition that the Packers and Lions have in the coming weeks, this certainly feels like a real possibility for Minnesota, which many  NFL fans cannot believe.

That would be wild…

Remember when the Vikings beating the Packers in Week 1 was just a fluke and Green Bay was going to eventually blow their doors off?

The Packers are about to have six more losses than the Vikings with six more games to go. (Vikings have eight more.)

What makes this stat seem even more wild has been the dominance that the Packers have shown off in recent years in the NFC North.

Green Bay has won the division each of the last three seasons, but those days surely seem to be numbered.

Minnesota is coming off perhaps their toughest test of the season in a come-from-behind victory over the Bills last week.

They will face another tough test this week in the Dallas Cowboys this weekend. This matchup could be very telling for how the Vikings fare against another playoff-caliber team as they prepare for what seems like an inevitable playoff berth in the NFC North shortly.