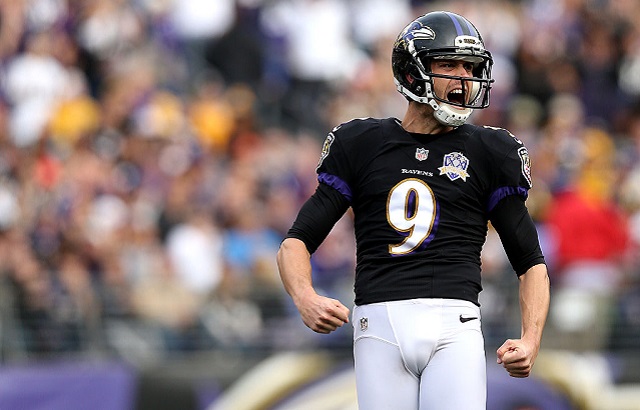 Since the NFL adjusted the length of the point-after kick attempt in the 2015 season, accuracy for kickers — both in extra-point attempts as well as for field goal tries — has taken a hit. The extra point, in particular, has been a struggle. It was easily the most-talked about aspect of Week 11’s action, when kickers missed a league-record 12 extra-point attempts.

The extra point is now kicked from the 33-yard line, moved back from its former 20-yard spot that yielded very few misses. The change in distance has had an appreciable effect on teams’ scoring — the Cincinnati Bengals’ Mike Nugent missed two extra points in Week 11 that helped contribute to his team’s loss to the Buffalo Bills. It has also prompted teams to attempt more two-point conversions after scoring touchdowns. The Pittsburgh Steelers attempted such a play four times in Week 11, and though they came up short each time, the motivation is obvious: To avoid missing a kick that was once a given.

Field goals, too, are becoming more difficult for kickers to make. Blair Walsh making 12 of his 16 attempts this season cost him his job with the Minnesota Vikings, while the Tampa Bay Buccaneers have been scrutinized for using a second-round pick on kicker Roberto Aguayo, who has missed five field goals so far this year. Kickers, it appears, are struggling. Their jobs should be easy, cut-and-dry, right?

Well, perhaps it’s our perception that needs to change. Maybe these missed extra points and field goals are hiding another sort of truth: That kickers are more valuable than ever.

Outside of quarterback, no player on a team’s roster scores more points in a season than its kicker. The Atlanta Falcons’ Matt Bryant, with 100 points so far this season in combined field goals and extra points, is the league’s leading non-quarterback scorer. He’s not missed an extra point and has gone 23 of 25 in his field goal attempts. The Baltimore Ravens’ Justin Tucker is the only perfect kicker in the league, making 100 percent of every field goal and extra point he’s attempted. Yet a single miss would make either of these players persona non grata to their respective fan bases.

Meanwhile, their teams’ quarterbacks — Matt Ryan for the Falcons, Joe Flacco for the Ravens — don’t necessarily have such vitriol directed at them for an unsuccessful red zone appearance. Touchdowns are desired out of quarterbacks, but not necessarily required. But when a drive doesn’t end with six points, it is expected that a kicker will be 100 percent accurate in the field goal attempt that ensues.

The extra point is harder to kick and field goals continue to be the outcome of long drives. Most teams are scoring touchdowns between 50 and 65 percent of their red zone appearances this year. As a result, the more accurate, trustworthy kickers in the league have a higher value to their teams than ever before. Instead of being treated like afterthoughts — basically one step up from punters, who we must constantly be reminded “are people, too”— kickers should rightfully be considered the quarterbacks of special teams.

Further, these misses highlight how much value kickers like Tucker provide to their teams. The more accurate a kicker, the more he matters to his team. Plus, with extra points no longer something teams can take for granted, the more value these formerly-afterthought one-point tries have to their overall game plans. The more certain kickers struggle, those who excel at the job increase in importance to their respective teams. This may lead to teams taking their kicker scouting more seriously, leading to more Aguayo-type high-round drafting at the position.

Now, there are cautions against such a move; Aguayo’s high miss percentage this year being one, the minimal number of plays in which a kicker factors being another. Plus, there is the curious instance of kickers currently having missed 48 33-yard point-after attempts, but only one field goal from that length, a stat that seemingly has no explanation.

NFL kickers are 44/45 on Field Goals from 32-33 yards this year, but have missed an astounding 48 extra points from that same distance.

And it is true that the extra point has been a problematic play for all but nine kickers to this point in the season.

But instead of looking at kickers being albatrosses hanging around the NFL’s neck in 2016, instead these misses have served to illustrate how difficult the job of kicking can be and how much a difference even just one point can make in a game’s outcome. Kickers and the points they produce can no longer be taken for granted, which means kickers aren’t just people. They’re playmakers.