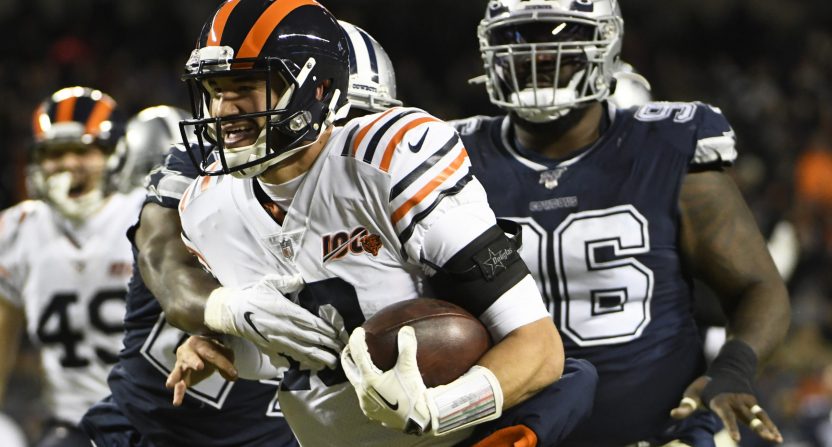 Mitch Trubisky threw for three touchdowns — with a 115.5 passer rating on 31 attempts — and added a 23-yard touchdown on the ground to lead the Chicago Bears to a 31-24 victory over the Dallas Cowboys on Thursday Night Football at Soldier Field.

The game wasn’t as close as the score indicated; Chicago had a 31-14 with under five minutes remaining before the Cowboys added 10 points in garbage time. Trubisky and the Bears were able to do whatever they wanted offensively. And while a lot of that was largely due to truly terrific play from Trubisky and great playcalling from Matt Nagy, the Cowboys’ defensive effort was pretty brutal, particularly in the tackling department.

It was a discouraging effort overall from the Cowboys, and that’s a familiar theme. After starting the season 3-0, the Cowboys have gone 3-7 with losses in three straight games. They’re still in first place at 6-7, because they’re fortunate enough to play in the dumpster fire that is the NFC East.

This loss drops the Cowboys to 6-7 and all the way down to first place in the NFC East.

Cowboys legend Troy Aikman called the nationally televised game on Fox, and said, “I don’t know how you come back from this.”

Joe Buck tried to be Mr. Cup Half Full: It's all still right there in front of the Dallas Cowboys…

Troy Aikman: Yeah, I don't know how you come back from this. I really don't, Joe… The talk is over and it has been over for a while." pic.twitter.com/eBAENmyGMN

Cowboys owner Jerry Jones has recently said that he’s sticking with Jason Garrett as head coach, but it’s getting more and more difficult to see how that could be the case for 2020, at least. While this Cowboys team is certainly very flawed, their recent play has not matched their roster talent and Garrett continues to make questionable in-game decisions.

The last 5 yrs Dallas has won just 4 games they trailed at halftime.

That ranks 30th in halftime deficits turned to wins (only the Browns & Lions have less).

They are 1 of 5 teams who have been unable to overcome a deficit of >7 pts.

And when a front office (in Dallas’ case, Jerry Jones) feels a roster isn’t playing to their capability, the coach is usually the one that will get the blame.

But if the Cowboys chose to fire Garrett before the season ends, it would be hard to pick someone on the staff as an interim solution, as Aikman said on the broadcast:

While the Cowboys are currently a mess and may back their way into a division title, the Bears are playing themselves back into playoff contention with their third straight victory to get to 7-6.

It’s still a longshot for Chicago (Five Thirty Eight gives them just a 5% chance), likely requiring the Bears to win out, and with a very difficult remaining schedule: at the Green Bay Packers, vs the Kansas City Chiefs, and at the Minnesota Vikings. But the Bears will still have something to play for still entering Week 15, in what appeared to be a lost season weeks ago.