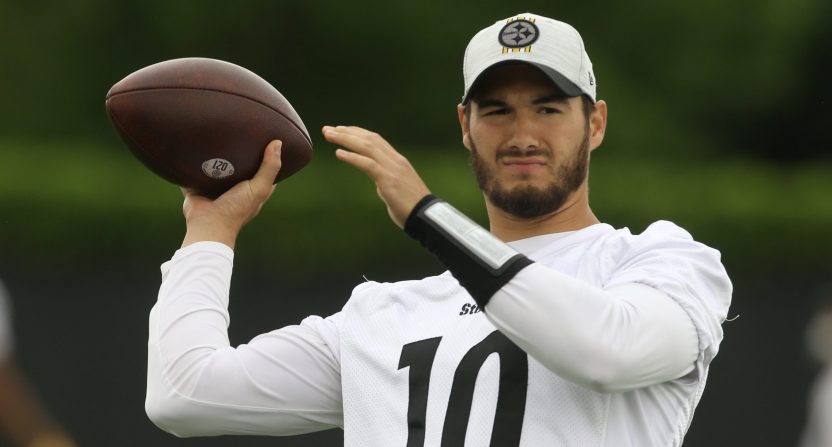 The Pittsburgh Steelers’ starting quarterback situation is very clearly in flux after the retirement of long-time quarterback Ben Roethlisberger. And it appears that their newest addition, Mitchell Trubisky, isn’t helping the matter with some poor practice performances thus far during the team’s training camp.

Trubisky has been getting the majority of first-team reps for the team this far in practice, but has reportedly been far from impressive to this point.

According to Mark Kaboly, Steelers beat writer for The Athletic, it has “not been a pretty camp” thus far for the veteran quarterback. And there are some pretty shocking stats from Kaboly that back up that claim.

In the “Seven Shots” drill, which is essentially a goal line drill with the offense and defense facing off at the two-yard line, Trubisky has been horrendous. The former Chicago Bears quarterback converted only 3 out of 20 attempts with a stretch of 16 straight snaps that did not end up as scoring plays.

While Pittsburgh does have a pretty solid defense, this type of production on the goal line for the offense is clearly an extremely worrying situation for the Steelers moving forward.

Mitch Trubisky 0 for his last 16 in 7 shots. 3 of 20 overall. Should he start even if he performs poorly?

0 completions on 16 attempts just 2 yards away seems bad is that bad? pic.twitter.com/nfT6zOOGAB

I think Matt Nagy can be blamed for a lot of things, but everything that went wrong with Mitch Trubisky is definitively not his fault https://t.co/sSnTGkSBxD

(also, a failed scramble and a failed Najee Harris run)

He hasn't directed a "score" since Thursday

He unfailingly has gotten EVERY single first-team rep all camp

Luckily for Trubisky, it doesn’t seem like rookie quarterback Kenny Pickett has done anything to warrant taking over the starting QB role, as he is currently taking third-string snaps in practice behind Pittsburgh vet Mason Rudolph.

As surprising as it may sound, it seems like if anyone is going to take the starting quarterback job away from Trubisky, it may be Rudolph instead of Pickett.

Rudolph has been unexceptional but steady when asked to start for the Steelers over his career, not wowing anyone with huge stats, but holding a 5-4-1 record as the team’s starter since 2019.

Regardless, the quarterback competition in Pittsburgh still seems to be very much up in the air at the moment, and seemingly up for the taking if anyone impresses in the coming weeks before the start of the 2022-23 NFL season.