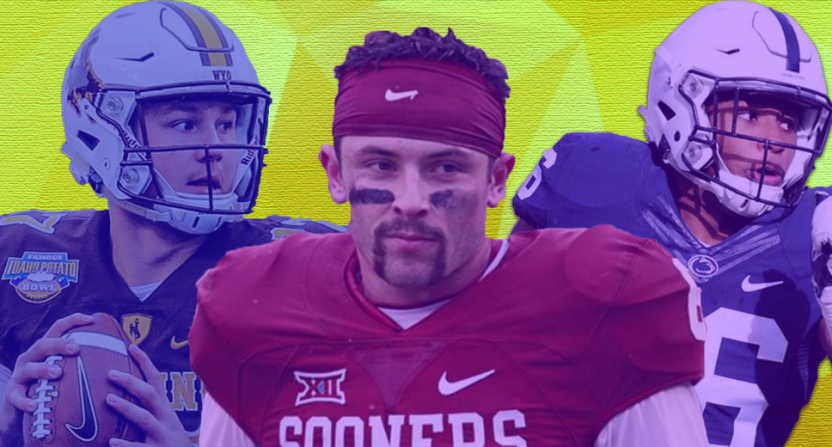 Draft day is upon us, and just before the Cleveland Browns are on the clock, we’ve got a full mock draft to get you prepared for Thursday night.

We guarantee we’ll get all 32 first-round picks right or you’ll get your money back. Just, uh, fill out that form for the refund.

All right, this is how the first round for 2018’s NFL annual player selection meeting will go:

1. Cleveland Browns: QB Sam Darnold — I don’t buy the games the Browns are suddenly playing in an attempt to get the Baker Mayfield-obsessed Jets to move up. It’s always been Darnold or Josh Allen, and Darnold is a much safer pick.

2. New York Giants: RB Saquon Barkley — It looks as though the Giants are going to hold on to this pick, and I think they’re really desperate for a generational player in the backfield. Barkley is the best skill-position prospect in this draft.

3. New York Jets: QB Baker Mayfield — I’m OK with this (Mayfield could easily become the best quarterback in this class), but the Jets have already given up three second-round picks to move up for a player they might have been able to land in the No. 6 spot. So they shouldn’t fall for Cleveland’s tactics.

4. Cleveland Browns: DE Bradley Chubb — With Barkley off the board, the Browns could try to trade down here. But Chubb might be too tempting and I’m not sure they’ll get an offer they can’t refuse with both Allen and Josh Rosen available. You can’t have too many high-quality pass-rushers, and a Chubb-Myles Garrett duo would be sick.

5. Denver Broncos: G Quenton Nelson — The best overall player in the draft would be ready to rock in front of Case Keenum from the get-go. No way they pass on him.

6. Buffalo Bills (trade with Colts): QB Josh Rosen — With Chubb and Nelson gone, Indy collects some extra picks and the Bills move up for the quarterback I believe they’re favoring over all of ’em.

7. Tampa Bay Buccaneers: S Minkah Fitzpatrick — The Bucs secondary could use the versatile Alabama product in a wide variety of spots. But this could just as easily be Derwin James.

8. Chicago Bears: LB Tremaine Edmunds — This has been a popular prediction for months. The tackle machine out of Virginia Tech is a better fit for Vic Fangio’s defense.

11. Miami Dolphins: CB Denzel Ward — Miami would have been all over Allen, but the Cardinals steal him away and the Dolphins settle for the best player available.

12. Indianapolis Colts (trade with Bills): DE Marcus Davenport — The former UTSA stand-up rusher has the makeup of a future star on the edge, so the Colts might be willing to wait a year or two for him to develop. I think they take him over James, mainly because they took Malik Hooker in Round 1 last year.

13. Washington Redskins: NT Vita Vea — The Redskins need to bolster the defensive front and give Jonathan Allen more support, and Vea would be an immediate upgrade over the aging, mediocre Ziggy Hood.

14. Green Bay Packers: CB Josh Jackson — He might need a year or two, but Jackson is coming off an unbelievable 2017 season at Iowa in which he intercepted a nation-high eight passes and scored twice. He’d be tough to pass up.

15. Oakland Raiders (trade with Cardinals): S Derwin James — Oakland lands a top-10 prospect who fills a need and is capable of starting right away while also collecting an extra pick or two from the Cards. Dream scenario for Jon Gruden.

16. New England Patriots (trade with Ravens): OT Mike McGlinchey — The Patriots must realize they have to do more to protect the aging Tom Brady with Nate Solder gone, and Baltimore might be willing to drop down while collecting an extra pick or two. After all, no receivers have gone off the board yet.

17. Los Angeles Chargers: LB Leighton Vander Esch — The Pats and Chargers would both be tempted by Lamar Jackson, but both need to be more concerned with 2018 than the long-term future. Vander Esch could contribute right away to a linebacking corps that needs him.

18. Seattle Seahawks: G Isaiah Wynn — The Seahawks love their versatile offensive linemen, and Wynn is ready to contribute right away at guard.

19. Dallas Cowboys: WR Calvin Ridley — With Dez Bryant gone, the Cowboys would be thrilled to have their pick of the wide receiver litter in the No. 19 spot. Ridley is the draft’s highest-rated prospect at that position.

20. Detroit Lions: RB Derrius Guice — This has always been one of the most obvious picks to me, which likely means it won’t happen. Regardless, the Lions badly need a game-changing back like Guice, who is ready to step in right away after back-to-back 1,200-yard seasons at LSU.

21. Cincinnati Bengals: C Billy Price — The Bengals need substantial help in the interior offensive line, and as a four-year starter at Ohio State Price would jump right in.

22. Buffalo Bills: LB Rashaan Evans — I’m not sure the trade with Indianapolis will cost Buffalo this pick. If it doesn’t, Evans is a good value selection and a need-filler in this spot.

23. Baltimore Ravens (trade with Patriots): WR Courtland Sutton — I know this is scary, but the big possession receiver out of SMU is the antithesis of Breshad Perriman.

25. Tennessee Titans: DT Da’Ron Payne — If the Titans were in on Ndamukong Suh, the Titans won’t shy away from drafting Payne. He’d form a hell of a duo with Jurrell Casey, and the Titans roster has become strong enough to afford them that luxury.

26. New England Patriots (trade with Falcons): QB Lamar Jackson — I get the feeling the Patriots love Jackson enough to trade up again, even if it means not having many picks left in this draft and dealing away an early selection next year. They know he won’t get past New Orleans or Pittsburgh.

27. New Orleans Saints: QB Mason Rudolph — I do, however, think the Saints might prefer Rudolph, who has a lot of Drew Brees-like traits but is a lot taller.

28. Pittsburgh Steelers: CB Mike Hughes — With the top six quarterbacks gone, the Steelers settle for the best defensive back available.

29. Jacksonville Jaguars: WR D.J. Moore — Moore is bigger, faster and more athletic than Christian Kirk, but both would make sense here for a team that parted with Allen Robinson and Allen Hurns in March.

30. Minnesota Vikings: G Will Hernandez — The bully out of UTEP would be an immediate starter in front of the most expensive quarterback in NFL history.

31. Atlanta Falcons: DT Taven Bryan — With Dontari Poe and Adrian Clayborn out the door, they could use some support for Grady Jarrett and Takkarist McKinley up front.

32. Philadelphia Eagles: OT Kolton Miller — The UCLA product might need some time, but that’s OK because you’ve got Jason Peters. Peters is 36, though, and Halapoulivaati Vaitai isn’t the answer. This is a good high-value project pick for the defending Super Bowl champions.