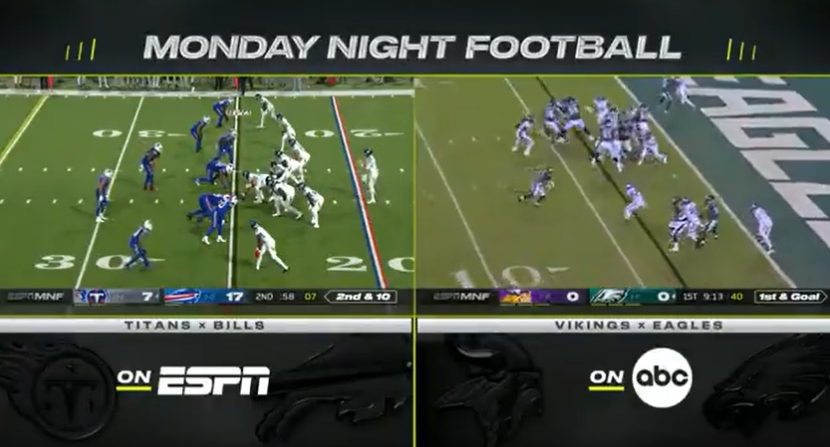 While ESPN has had a Monday Night Football doubleheader in past seasons, 2022’s is different. In previous years, there was little to no overlap in the games, as the second game was always hosted by a team in either the Mountain or Pacific Time Zone. This time, with both games in the Eastern Time Zone, there was a significant overlap. That overlap led to one controversial tactic from ESPN and ABC.

While both games were going, a score bug of the Minnesota Vikings versus Philadelphia Eagles game on ABC was in the top-left corner of the Tennessee Titans at Buffalo Bills broadcast on ESPN — and vice versa. That made sense. In addition to that, though, the broadcasts would occasionally make use of a split screen, showing both Monday Night Football games simultaneously.

That was not a popular decision.

Memo to ESPN: Stop with the damn split screens. If we want to watch the Eagles game, we’ll flip the channel. We’re watching the #Bills.

Stop with the split screen!! 🙄

The split screen on #MNF was too much. I didn’t know where to look, what to do with my hands, who was even playing! 🤯 @ESPNNFL

Can we not with the split screen??? No one in Buffalo cares about Eagles Vikings.

ESPN please stop with this split screen. One game just started. I’m trying to watch the one in the final minute of the second quarter.

I tend to agree https://t.co/NsbwipRHk4

This is why not staggering these games was patently dumb and shortsighted https://t.co/Up0RQgSMcI

Having a reminder of the other game being on is nice, especially for neutral fans who may want to keep an eye on the closer game. That said, the scorebug was more than sufficient for that as it showed the score, time left, and which team had the ball.

It’s one thing to use a temporary split screen to show a highlight from the other game. But this often seemed to have no rhyme or reason to it.