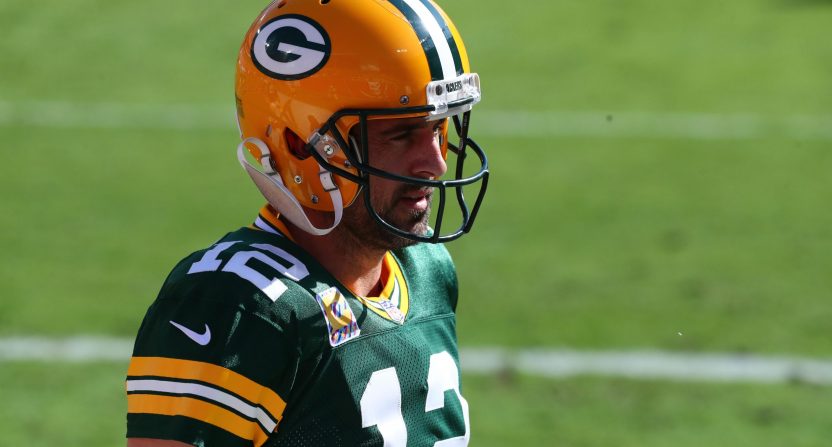 The Green Bay Packers’ 2021 training camp practices begin on Wednesday, and we still have no idea on the status of superstar quarterback Aaron Rodgers. But multiple sportsbooks think they know what Rodgers will choose to do, and it wouldn’t be good news for the Packers.

According to Bill Huber of Packer Central at SI.Com, Westgate Superbook closed all its NFC North markets, including projected wins, playoff odds, divisional odds and weekly lines for the four division teams.”

And what’s even more eye-opening from Huber: “two other sportsbooks said the expectation is Rodgers is going to announce his retirement sometime before the first practice on Wednesday.”

Two other sportsbooks contacted after that initial message said the expectation is Rodgers is going to announce his retirement sometime before the first practice on Wednesday. In response, one of those sportsbooks pushed out its prices on the Packers to win the NFC North and shortened the odds for the other teams. It also shortened the odds of Patrick Mahomes winning NFL MVP.

Update: Troy Renck Denver7 (ABC affiliate) confirmed that the Westgate SuperBook closed its NFC North markets “believing there could be Aaron Rodgers’ announcement soon,” and that “speculation is he will say he’s retiring.”

Texted w @JayKornegay of @SuperBookSports. SuperBook has indeed closed its NFC North markets believing there could be Aaron Rodgers' announcement soon. Speculation is he will say he's retiring, a move last used by Carson Palmer to force trade to #Raiders in Oct. 2011. #Denver7 pic.twitter.com/uEV7SU2QM1

And as Mike Florio of Pro Football Talk notes, PointsBet and DraftKings have also removed the Packers from their over/under win totals from the list of 32 NFL teams.

When Las Vegas sportsbooks make notable odds (or removal) adjustments, and especially when they straight-up tell people what they’re thinking, it’s always worth listening. They’re frequently getting very good information; it’s important that they indeed get reliable information and do serious digging so that they aren’t taken advantage of by bettors. As a source told Florio, “Vegas oddsmakers tend to be pretty sharp.”

As one source with knowledge of the dynamics of the Rodgers situation said in response to these developments, “Vegas oddsmakers tend to be pretty sharp.”

This news also comes on the same day that NFL Network’s Ian Rapoport reported that the Packers and star wide receiver Davante Adams “have broken off long-term extension talks” and are “now in a bad place.”

It’s not just Aaron Rodgers: The #Packers and star WR Davante Adams have broken off long-term extension talks. There are no current plans to resume them. The two sides have been negotiating for months, but they are now in a bad place, sources say. First the QB, now the No. 1 WR.

So, the drama here isn’t just about Rodgers and Packers, and it’s very possible that drama is impacting everything else; does Adams want to even be there long-term if Rodgers isn’t part of things, for example?

Now, Rodgers “retiring” doesn’t necessarily mean he would retire from the NFL for good, and it’s very possible he’d be happy to play somewhere else — like with the Denver Broncos or Las Vegas Raiders — if the Packers were willing to trade him ahead of the 2021 season (which they have not at all been, according to several reports, and we have no idea if that stance will change even if Rodgers makes his “retirement” feelings clear when training camp arrives).

Additionally, he could unretire in a year and the Packers could trade him before the 2022 season, but it’s unlikely they would get nearly as much in return at that point (due to his age — he turns 39 in Dec. 2022 — and due to sitting out a full season).

David Dunn repped Carson Palmer who "retired" to force his way out of a situation he didn't want to be in.

Aaron Rodgers has Dunn repping him.

Many people have understandably been in the “I’ll believe it when I see it” mode when it comes to Rodgers walking away from the Packers, an organization that he’s won three MVPs with — including 2020 — over his 16 NFL seasons. It *feels* hard to believe, but it’s probably time to really start believing that this could happen- and soon.