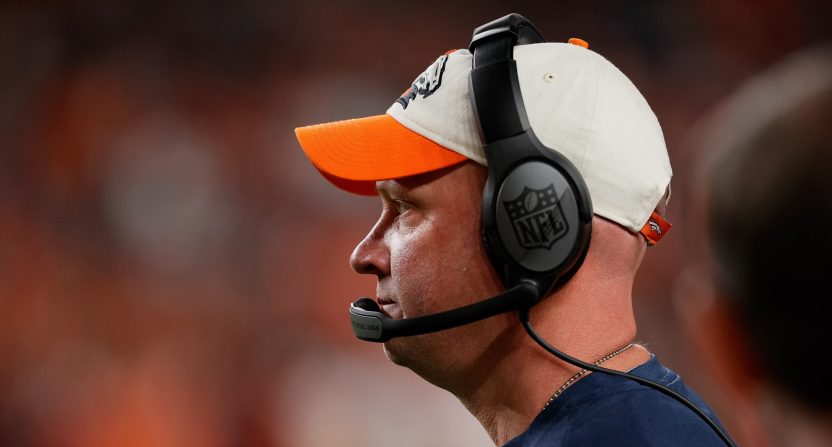 Denver Broncos head coach Nathaniel Hackett has been under a ton of criticism for his decision-making to begin the season. His critics are only getting louder after some questionable decisions on Thursday night against the Indianapolis Colts.

Despite an ugly offensive performance by both teams, Denver found itself ahead late in the fourth quarter deep in Colts territory.

This is where Hackett began his series of questionable decisions in Thursday’s game.

With 2:19 left in the fourth quarter, the expectation was for the Broncos to run off as much time as they could and kick a short field goal to go up by six points.

The Broncos are trying to put the game away… and instead it's another Russell Wilson interception. Brutal!

(And it summarizes this game) 🏈 #TNF pic.twitter.com/SOA4CisjzV

The Colts were then able to take the ball down the field with a clutch drive by Matt Ryan, setting up a game-tying field goal attempt to send the game to overtime. Kicker Chase McLaughlin came through.

The Colts tie this awful game 9-9… and Broncos fans head for the exits instead of staying for overtime. 🏈😂#TNF pic.twitter.com/h6KxxHs8qr

This began the frustrations for Broncos fans, with many shockingly leaving the stadium before overtime even started.

After another Indianapolis field goal in overtime, Denver had one chance to tie or win the game in overtime.

They took the ball all the way down the field to the Colts’ five-yard line, where Hackett was presented with another difficult decision on fourth down.

Hackett ultimately decided to let Wilson throw the ball to attempt to win the game instead of running the ball, and the play did not go to plan.

Stephon Gilmore made another huge play on defense to break up the pass attempt and give the Colts the victory.

Given Hackett has already been criticized in the past for his decision-making, everyone is calling for him to be relieved of his duties in Denver.

Normally I don't advocate for first year coaches to get fired, but Nathaniel Hackett seems like a deer in headlights now that he has the main whistle

Russell Wilson’s poor performance certainly didn’t help things, but there is certainly a point where the Broncos organization needs to stop allowing Hackett to throw away winnable games.

Denver now sits at 2-3 in a difficult AFC West division, and the future is looking less and less bright with Hackett at the helm.