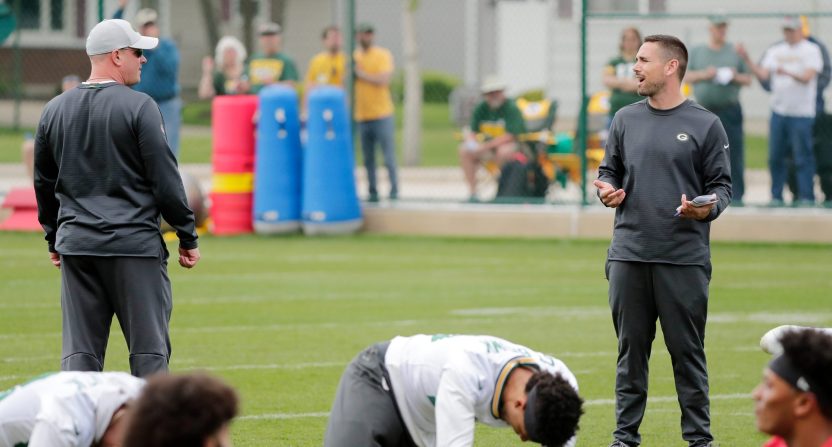 Nathaniel Hackett was introduced as the new head coach of the Denver Broncos on Friday. The former Green Bay Packers offensive coordinator takes over after Vic Fangio was fired at the end of the season.

The Broncos had their sights set on Hackett pretty early on and he was named as one of three finalists for the job earlier in the week.

One of the most interesting wrinkles in hiring Hackett would be the assumption that Aaron Rodgers might be intrigued enough to follow him from Green Bay. Rodgers has opened the door to leaving the Packers following this season and we know that the Broncos were very interested in trading for him before the season. This could potentially be a star-aligning moment for all of them.

For now, at least, it appears that the Broncos aren’t going to bank on that possibility but remain hopeful that Hackett will be able to get them back to the playoffs, with whoever plays quarterback.

Paton on if Aaron Rodgers was a factor in hiring Hackett: “Absolutely not.” #9sports

Meanwhile, Hackett appeared at his introductory press conference on Friday and explained his vision for the job and the team moving forward.

“I think right now, you know, just getting here on this day, I think there are so many things we’re going to talk about. I think we’ve discussed all kinds of different things and I think now that this whole thing is official, I’m so excited to go sit down and go through it all, from the entire staff (to) everything,” Hackett said. “So those, the quarterback position, all that stuff, we’re going to sit down, George (Paton) is a great guy to talk to and I imagine we will talk for a long time about everything.”

The 42-year-old also declared that he had a very specific goal now that he was a head coach in the NFL, calling out his former boss in the process.

Nathaniel Hackett: “Matt LaFleur, I’m gonna make a run at being the sexiest head coach in the NFL against him.” pic.twitter.com/fWRe7prZBf

Well then. As you might imagine, that quote created some interesting reactions, especially about the head coaches who got passed over by Hackett.

Look I’m not gonna disparage Nathanial Hackett but let’s be honest if my wife told me tomorrow that she was leaving me for Matt LaFleur I would completely understand. https://t.co/0EyFWbpb45 pic.twitter.com/6L1yJvEwxr

bald is sexy many people are saying this out loud in public to their friends https://t.co/2qXnYW7BnM

Hackett has his work cut out for him in terms of rebuilding the Broncos in the same division as the Chiefs, Chargers, and Raiders. As far as his other goal, we suppose that one is a bit more subjective.