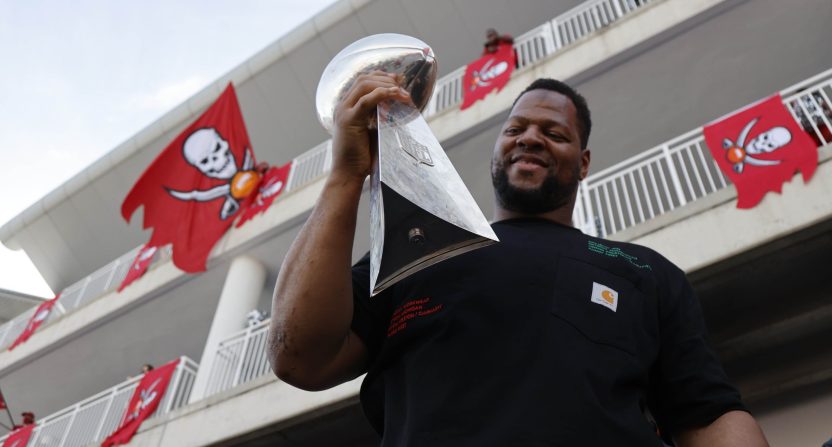 Tom Brady is returning to the Tampa Bay Buccaneers in 2022 but it appears that pass rusher Ndamukong Suh probably won’t. That’s according to a report by The Athletic’s Greg Auman, who wrote that the Bucs don’t see resigning Suh as a priority at the moment.

“The Bucs were lukewarm to defensive lineman Ndamukong Suh even before they used their top draft pick on a player at his position in Logan Hall,” Auman wrote. “To sign him now would be to actively chip into Hall’s role before they’ve even seen what he can do. Bucs GM Jason Licht said he wasn’t shutting the door on signing Suh, but then said, ‘there are a lot of injuries that happen throughout the year,’ suggesting he might only be an option in case of a serious injury.”

Suh garnered 27 total tackles, 13 quarterback hits, six sacks, and a fumble recovery last season. While not terrible numbers, they’re a far cry from his All-Pro days. Given that he’s earning $9 million a year, it’s understandable that the Buccaneers might want to look to the future.

For now, it sounds like Tampa is ready to go into the preseason with William Gholston, Rakeem Nunez-Roches, and Vita Vea as their main defensive linemen along with Kobe Smith and Logan Hall. Of course, injuries can change the situation in a hurry, but it certainly sounds like Suh’s time in Tampa Bay are over.