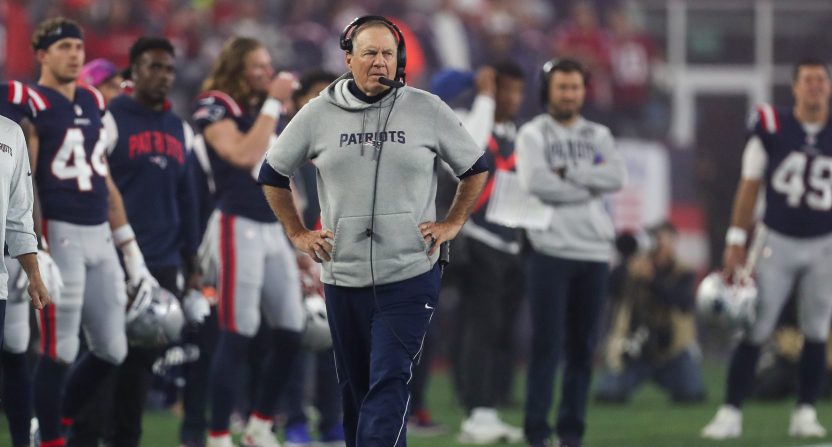 Bill Belichick is intelligent, but he’s not a magician. As much as people like to mythologize his acumen, he has mistakes and fumbled opportunities. It just happens less often with him than with other NFL coaches.

The New England Patriots (3-4) are struggling, and things could get worse. When is the last time they have been last in the division this late in the season? That spot is normally occupied by the New York Jets or Miami Dolphins. This isn’t your father’s AFC East. It’s not even your older brother’s. For two decades, the Patriots feasted on a weak division which usually helped them secure a first-round bye in the postseason.

The Buffalo Bills (5-1), the Jets (5-2), and the Dolphins (4-3) all have something New England doesn’t— winning records. These post-Tom Brady Patriots are in jeopardy of missing the playoffs for the second time in three seasons.

According to Tankathon.com, New England has the toughest remaining schedule (.629 opponents winning percentage). The Patriots have two games against the Bills and the Jets, and they have to visit the Minnesota Vikings and host the Cincinnati Bengals.

In previous years, most would assume that Belichick could strategize his way to victory. He’d come up with some plan to vault the Patriots back into contention. That still may happen. But since Brady left Foxborough in 2020, we’ve seen Belichick look quite human and quite beatable. He went 7-9 the first year without Brady. Last season, he suffered the worst playoff defeat of his career, 47-17 to the Bills. Now, he’s staring at another losing record.

We’re not saying the emperor has no clothes, but Belichick’s choices are looking more and more bizarre. His latest questionable move was his decision to play musical chairs at quarterback with Mac Jones and Bailey Zappe in Monday night’s 33-14 home setback to the Chicago Bears. Whatever Belichick was trying to accomplish backfired as his shuffling created more confusion than answers. It’s one thing for the media or fans to have doubts, but even Belichick’s players were confused.

Belichick has yet to reveal who will start against the Jets. It was just last year that Belichick was praised for his selection of Jones, who turned out to be the best of the rookie passers. But this season, Jones has the second-worst passer rating behind only Pittsburgh Steelers newbie Kenny Pickett. Zappe, who surprisingly went 2-0 as a starter in Jones’ injury absence, has provided a spark. But is Belichick really going to bench Jones this quickly?

But look beyond any potential quarterback controversy. It’s not like this version of the Patriots was built to win the AFC East. The Bills have been overwhelming with an average scoring margin of +15.8. The next closest team is the undefeated Philadelphia Eagles (+9.3). The Patriots are +1.3, and three of their losses are by double digits. The loss to Chicago was a low point, not just because of the quarterback fiasco. Belichick’s defense got pushed around, allowing 243 rushing yards. The Bears scored a season-high in points.

Questions at quarterback and on defense. That doesn’t sound like the Patriots we know. But that’s who these Patriots are. And it’s up to Belichick to do something about it. The league’s second-highest-paid coach and second-oldest coach has largely avoided major criticism. That’s what six Super Bowl rings buy you. However, Brady won the Belichick-Brady breakup. And it’s only going to look worse if this Patriots season implodes.

A smart man realizes his limitations. Belichick, 70, must find a way to overcome his to get New England back in the playoff hunt.

For those wondering which Patriots’ quarterback will start Sunday vs. the Jets, Bill Belichick stuck to the script: “We'll see how it goes today.” pic.twitter.com/dt3xw47Ip0