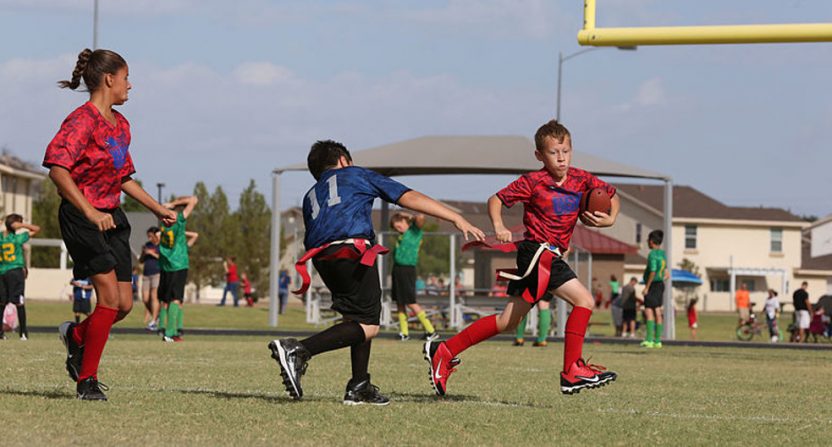 By this point, most sports fans are well-acquainted with the masses of research connecting football to cognitive issues. A new study from the VA Boston Healthcare System, the Boston University School of Medicine and the Concussion Legacy Foundation has something else to add to the mix, though, providing yet more evidence towards their previous findings that beginning tackle football at an early age can lead to long-term health issues. As per A.J. Perez of USA Today, the latest research has a lot to say about what starting tackle football early can mean for athletes in later life:

“Youth exposure to repetitive head impacts in tackle football may reduce one’s resiliency to brain diseases later in life, including, but not limited to, CTE,” Ann McKee, director of Boston University’s CTE Center and one of the study’s authors, said in a statement to USA TODAY Sports. “It makes common sense that children, whose brains are rapidly developing, should not be hitting their heads hundreds of times per season.”

These results are perhaps particularly notable considering that there’s the chance for them to actually influence meaningful change. The world’s well aware at this point that playing football in general may be dangerous for long-term cognitive health, and that’s led to some early retirements and likely will lead to more, but professional and collegiate football as a whole aren’t going anywhere any time soon given the amounts of money involved and the amount of people willing to play the game. The age at which kids can start playing organized tackle football, though, that’s something that could potentially be changed. And there are plenty of state legislative efforts underway to try and increase that age, in Illinois and elsewhere, which may lead to a lot more focus on flag football early on.

In many ways, this discussion bears some similarities to what’s going on in soccer, where studies have suggested that heading the ball can cause long-term brain damage and bodies like U.S. Soccer have moved to ban organized heading for kids aged 10 and under. Yes, there are potentially some competitive downsides to having players focus on picking up a skill important in the sport only as they get older, but those seem pretty minimal compared to the health risks. And there may even be a stronger argument for nationwide health restrictions in football than in soccer; while there are some top NFL players who come from outside the U.S., it’s a sport that’s largely full of Americans, so there isn’t even the argument of “you’re putting us behind the rest of the world!”

That may not be even a good argument in soccer, especially as there’s no proof that heading early on actually makes players better and many other national organizations are taking similar tactics, but it is a discussion in that sport. That argument can exist in football if legislation only comes state by state, but if anything does happen nationally, there’s less of a case for it causing major problems. If the vast majority of players heading into college or the pros are on the same page when it comes to how much tackling experience they have, it doesn’t really matter how long they’ve been tackling for. (And there’s also a case that it’s smarter in general to have kids taught to tackle at a higher level where they can learn proper form the first time.)

At any rate, this study isn’t going to instantly lead to change overnight. But its conclusions are certainly troubling. This is not a minor change in life we’re talking about; it’s experiencing cognitive issues, which many, many stories have shown can be quite serious for former football players, over a decade earlier on average simply thanks to starting tackle football earlier. And that should have people very worried about the impacts of tackle football on younger kids, and it may add to the calls for regulation and different practices.