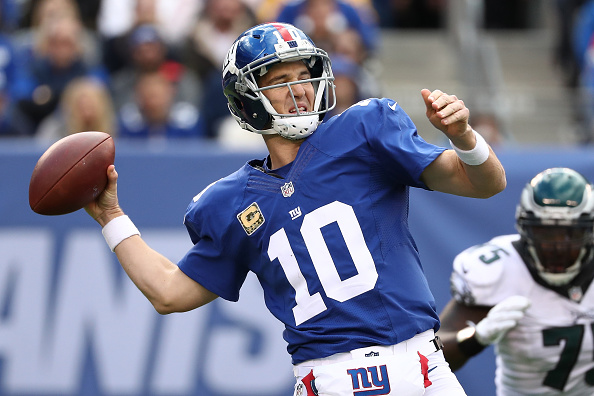 With the No. 2 pick in the 2018 NFL Draft, all eyes are on the New York Giants as they look to rebuild one of the NFL’s marquee franchises.

Seven years removed from their last Super Bowl victory, the Giants are getting close to saying goodbye to franchise quarterback Eli Manning, one way or another, and many people assume they’ll want to take a quarterback to shore up the future. USC’s Sam Darnold, UCLA’s Josh Rosen, and Wyoming’s Josh Allen have all been mentioned, though rumors have each of them coming and going from contention seemingly every hour.

Of course, the Giants also have a thing for drafting dependable defensive linemen to anchor the other side of the ball. They could certainly do that by selecting NC State’s Bradley Chubb. Many teams apparently would take him with the second pick, assuming Darnold is off the board with the top pick.

Or they might go with Penn State’s Saquon Barkley, who ran for 3,843 yards and 43 touchdowns in three seasons. New York hasn’t had a truly dominant running back in some time, and the idea of locking up a potential franchise-changer with this pick has to be enticing, even if drafting running backs high is routinely considered a bad bet.

There’s going to be a lot of second-guessing when it comes to who they end up selecting, and more so, who they don’t. But whatever they do with the pick, history tells us that the New York Giants have a good chance at taking one of their next great franchise stars. Don’t believe us? Let’s take a look at the other four times the G-Men had a top-five pick in the NFL Draft since 1980.

The last time the Giants had the No. 2 pick in the draft, they were coming off a 4-12 season (almost the same as now), but were also mired in a stretch of losing seasons that stretched back to 1972. The hope was that whoever they picked in the 1981 NFL Draft would end up being a catalyst to help them make a return to legitimacy. Boy, was that ever the case. The Giants selected North Carolina linebacker Lawrence Taylor and perhaps you’ve heard of him.

Not only was Taylor named Defensive Rookie of the Year in ’81, but also Defensive Player of the Year. He would earn that distinction two more times in his career, as well as NFL and NFC Player of the Year nods and an MVP award in 1986. He was also the cornerstone of a defense that led the Giants to two Super Bowls (1986, 1990). Considered by many to be the greatest defensive player in league history, the 10-time Pro Bowler ended his career with 132.5 sacks.

So, yeah, the Giants did pretty well on that one.

Even though drafting Taylor gave the franchise a nice boost, they still needed to complement him with a linebacker who could match him on the other side. Enter Carl Banks, the Michigan State linebacker selected with the No. 3 pick in the 1984 NFL Draft.

Banks gets overshadowed because he played most of his career alongside LT, but his numbers speak for themselves. A member of the NFL’s 1980s All-Decade Team, Banks had 826 tackles, 39.5 career sacks, made the 1987 Pro Bowl, and was a key component of the team’s 39-20 victory in Super Bowl XXI (registering 14 total tackles). He was also a big part of the effort to win Super Bowl XXV as well.

This member of the New York Giants Ring of Honor went on to finish his career with Washington and Cleveland, but the nine seasons he spent in New York more than justified his high selection.

It’s a testament to how good the franchise’s run was in the 80s and early-90s that they didn’t have a top-five pick against until 1996. As if they needed to continue the ongoing trend, the Giants selected Oklahoma defensive end Cedric Jones with the No. 5 pick. Jones had a phenomenal career with the Sooners (31.5 sacks and 46.5 tackles for loss) and seemed like a sure thing to be the next great Giants defender.

Things didn’t quite work out the same way with this high draft pick as it did for the previous two. It took Jones three seasons to become a steady starter and even then he didn’t make a huge impact in two seasons of work there. After five years, he left to play one more season with the Rams and was out of the league by 2002.

Jones did end up playing in Super Bowl XXXV, however, keeping the streak of top-five Giants picks who made it to the big game alive. So that’s something.

The Giants wouldn’t have a top-five pick again until 2004, when they found themselves in need of a new franchise quarterback. The need was clear, but the pick was a big question. It was between NC State’s Philip Rivers and Eli Manning from Ole Miss. The Chargers had the top pick and intended to take Manning, but Peyton’s younger brother (and father Archie) had made it clear he didn’t want to play for them. San Diego drafted him anyway and the Giants picked Rivers with the fourth selection. The two teams swapped quarterbacks and the Giants also sent included some draft picks in the deal (which turned into Shawne Merriman and Nate Kaeding).

In the beginning, a lot of people thought San Diego had fleeced the Giants, much the way the Cowboys did to the Vikings in the Herschel Walker trade. However, Manning would end up steering the Giants to two Super Bowl victories, earned four trips to the Pro Bowl, and has passed for over 50,000 yards in his 14-year career.

Rivers ended up having a solid career with the Chargers, too, albeit without the titles. You can quibble over Manning’s “greatness,” but the fact is that he ended up being worth the draft-day trade and the high pick.

So, based on that, the Giants have about a 75 percent chance at drafting the cornerstone of their franchise for the next decade at the upcoming draft. Of course, there’s always that 25 percent that can go the other way, and there’s certainly no logical connection between how former regimes drafted and this current one will. But if you believe in such things, believe that the odds are in New York’s favor this coming draft day.