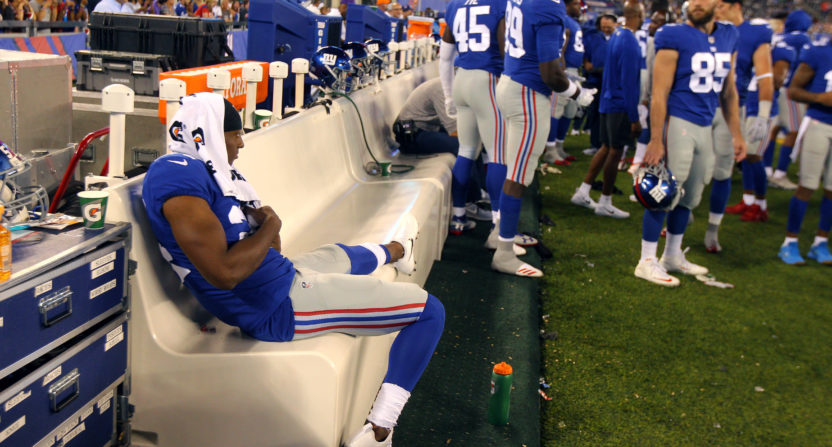 Giants cornerback Eli Apple committed a ghastly sin on the sideline Sunday during his team’s game against the Dallas Cowboys: he tweeted. For that offense, a violation of NFL rules, the Giants have fined him an undisclosed amount, according to ESPN.

Apple was inactive Sunday for the fourth straight game and spent part of the afternoon on Twitter, telling a fan he was “too healthy” to play and retweeting an article about Cowboys running back Rod Smith’s long touchdown catch against the Giants.

Eli Apple is an embarrassment. pic.twitter.com/kBzo2Qzxcz

Tweeting during a game is not a great idea to begin with, but celebrating the opposing team during a game? That’s gonna get you in some trouble. Giants interim coach Steve Spagnuolo, unsurprisingly said he was “disappointed” by Apple’s behavior.

Apple, for his part, did not make any excuses about his mid-game tweeting. Instead, he simply acknowledged his mistake. Via ESPN:

“I wasn’t confused. It was just a mistake by me,” Apple said Thursday.

He wouldn’t specify what the repercussions were for his infraction, and he hopes to play this weekend against the Philadelphia Eagles.

“Everybody has to pay for any mistake they make,” said Apple, who would only say the matter was handled in-house. Even though Apple broke a league rule, the NFL and individual teams don’t both fine players for the same violation.

Apple is having a tough sophomore season after being selected No. 10 overall in the 2016 NFL Draft. Hopefully he’ll get back on the field to finish out the campaign, but if he doesn’t, he should probably leave his phone in the locker room.