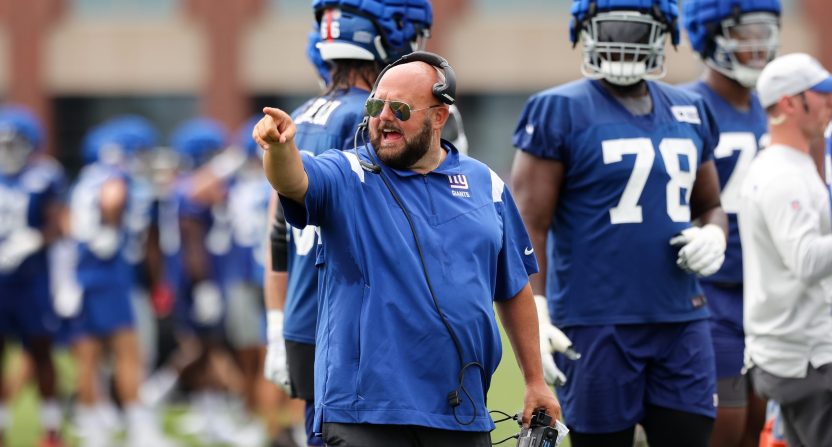 During the New York Giants practice on Monday, there was a wild brawl where punches were thrown involving a number of players and even a member of the coaching staff.

The fight initially kicked off when linebacker Tae Crowder took down running back Antonio Williams, which led to a huge scrum with nearly the whole team rushing in to get involved.

Jon Feliciano and Tae Crowder fight!!!!!! Feliciano ended up swinging on Crowder after the fact too pic.twitter.com/xS54LBeNw8

Things turned more violent when Giants center Jon Feliciano was pulled out of the scrum by linebacker Cam Brown, which resulted in Feliciano and Brown going at it and Brown getting sucker punched.

Offensive line coach Bobby Johnson then got involved, pushing Brown as he was going at Feliciano in what seemed to be an extremely chaotic scene.

All started by Barkley, who had McKinney in his face for starting it.

Little melees happen all the time in practice, but it is extremely rare when punches get thrown or coaches get involved by putting their hands on players.

Many around the NFL world are laughing at the sheer chaos that occurred in the wild brawl.

1 hour into “Bro my give me another one, my tolerance is higher than most peoples.” pic.twitter.com/Ovo8amz3wp

There were so many hilarious parts of the #Giants practice fight, but by far the funniest to me was when the entire team was in the melee.. I think it (couldn't see for sure) was Adoree & Ricky Proehl about 5 yards outside of the mosh pit, shadow boxing with each other.

Feliciano appears to be laughing off the high tensions during practice as fans sent him a hilarious picture of him getting dragged by Brown.

This is not the first scuffle that has broken out for the Giants this training camp, as offensive lineman Shane Lemieux got into it with numerous defense tackles earlier last month that resulted in a brawl.

OL Shane Lemieux tackled DL Dexter Lawrence after a play, then DL Leonard Williams came over and took down Lemieux and pinned him to the ground. pic.twitter.com/fbcsgpOrSH

New head coach Brian Daboll will certainly need to get his team’s temper under control before the start of the 2022 NFL season, or else it seems like they will be among the most penalized teams in all of football next year.