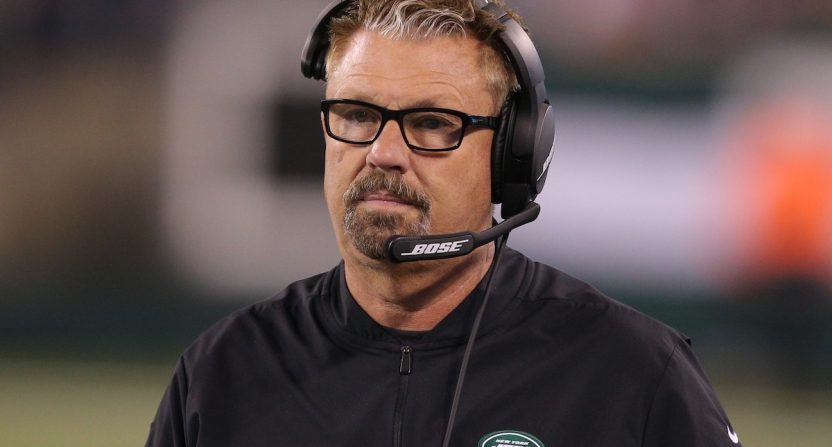 The entire New York Jets coaching staff will likely be looking for work after the 2020 season is finished. But defensive coordinator Gregg Williams beat his colleagues out the door after the team fired him on Monday. The news was first reported by NFL Network’s Tom Pelissero.

Williams’ dismissal comes after a blitz call late in Sunday’s game against the Las Vegas Raiders cost the Jets their first win of the season. (Those hoping for the Jets to get the No. 1 overall pick in next year’s NFL Draft and select Clemson quarterback Trevor Lawrence were surely happy with the result, however.)

The Raiders with the late bomb touchdown to beat the Jets!

Then again, it's also a #TankWin for the Jets. Both fan bases are happy after this one. pic.twitter.com/Stsczwp4cx

Williams called for eight players to blitz Carr, a decision that NFL’s NextGen Stats (via Pro Football Talk) said no other team had made in the final 30 seconds of a game this season. After the game, Carr said he couldn’t believe the Jets called for an all-out blitz.

As you can see in the video clip above, that left three Jets defensive backs to cover three Raiders receivers, resulting in a disastrous outcome for the home team.

The Jets are the only team to send 8+ pass rushers on a play in the last 30 seconds of a game this season.#LVvsNYJ | #TakeFlight

NextGen Stats’ Win Probability metric also had the Raiders’ chance of winning before that play at 29 percent, according to NFL.com’s Nick Shook. So Williams defied the odds in the worst way possible.

Following the game, free safety Marcus Maye was critical of Williams’ play call in his postgame remarks to the media.

“We fought hard to put ourselves in the position to win,” said Maye (via the New York Post‘s Brian Costello). “That’s the point in the game we’ve just got to be in a better call.”

“We have to execute, but you have to help us out at the same time” – #Jets safety Marcus Maye

Holy cow. He is going in on defensive coordinator Gregg Williams.

That call also put a rookie cornerback in a position to fail, something no defensive coordinator should do to his players.

Maybe, but the guy in charge of the defense also needs to be better. There’s no worse way to destroy players’ confidence in the coaching staff, which was reflected in those postgame remarks. Head coach Adam Gase also wasn’t happy with the call, surely a major factor in the team deciding to fire Williams.

If sending a zero blitz into a Hail Mary situation is the last defensive call that Gregg Williams ever makes, I think it's the way he would've wanted to go out.

An aggressive approach has been Williams’ signature throughout his NFL coaching career, in addition to an arrogant and abrasive attitude that’s put him at odds with coaches, executives, and media. He’s been a defensive coordinator for the Houston Oilers and Tennessee Titans, Washington Football Team, Jacksonville Jaguars, New Orleans Saints, Los Angeles Rams, and Cleveland Browns. And he had a three-year stint as head coach for the Buffalo Bills.

But that philosophy has also hurt him at times, most notably when he was involved in the Saints’ “Bountygate” scandal in which players were paid bonuses for injuring opposing players. Williams, assistant Joe Vitt, head coach Sean Payton, general manager Mickey Loomis, and linebacker Jonathan Vilma were all suspended for their roles in the scheme.

Now, Williams is on the market again. And his success as a coordinator will likely get him another job. But maybe calling for that blitz and costing his team a game will compel teams to think harder about hiring him.