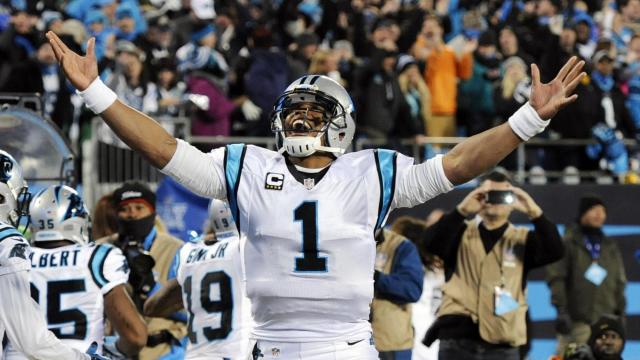 The headlines said that the Carolina Panthers lost their chance to complete a perfect season when they fell to the Atlanta Falcons in week 16 of this NFL season.

Everyone knew what those headlines meant. However, after the Panthers crushed the powerless Arizona Cardinals in the NFC Championship Game on Sunday night in Charlotte, they have earned a place in Super Bowl 50 opposite the Denver Broncos.

One more win will indeed create a perfect season for this renewed franchise.

Ever since the New England Patriots (losers of Sunday’s AFC title game in Denver) absorbed the flood of injuries which eroded their overall abilities, the Panthers took the baton as the best team in football. That distinction has existed for roughly two months. In Sunday’s second 1-versus-2 conference title tilt, Carolina’s NFL supremacy remained very much intact.

The Panthers had no intention of dropping the baton. They pounded Arizona with it from start to finish.

In all three phases of competition and with equal parts power and speed, Carolina simply undressed Arizona, taking what had been a very formidable crew of Cardinals and making them look like an 8-8 team. That last note might even be generous, too.

If Patriots-Broncos was a close-to-the-vest thriller, Cardinals-Panthers turned into the fierce but freewheeling demonstration of first-class football by a team operating at the height of its powers. What was already a lopsided game at halftime (24-7, Panthers) became a savage beatdown in the second half.

The enormous gulf between two teams recalled the last time the Denver Broncos made the Super Bowl. Carolina will talk respectfully of its upcoming opponent in Levi’s Stadium, but Sunday’s imposing romp over Arizona showed that the Panthers are capable of making Super Bowl 50 look a lot like Super Bowl 48.

There was just a brief moment when the outcome of this game seemed ever-so-slightly in doubt.

The Panthers, following a takeaway on a strip-sack of Arizona quarterback Carson Palmer, were about to land a knockout blow and take a 31-7 lead just before halftime. Newton, in one of his rare missteps on Sunday, air-mailed a pass to an open receiver deep in Arizona territory. A long interception return gave the Cardinals a chance to not merely avoid a 24-point deficit, but trim that disadvantage to only 10 at the half. Such a turnaround easily could have become the foundation for a major comeback. The Cardinals’ offense arrived at its moment of opportunity.

The Panthers took a 17-point bulge to the locker room, and when they used over seven minutes of clock to score a field goal on their first possession of the second half, the Cardinals lacked both the time and the scoreboard leverage needed to implement their game plan. They were in scramble mode before they even touched the ball for the first time in the third quarter.

Carolina’s pass rush predictably feasted on Palmer, who has yet to play a complete postseason game in his admirable yet unfinished NFL career. The Cardinals were wobbly at times in their overtime win over Green Bay a week earlier. They couldn’t elevate their level of performance against the NFC’s top seed. Over the final one and a half quarters in Charlotte, the Carolina steamroller hummed with ruthless fluidity.

Indeed, what stood out about Carolina’s win was its totality. There was no aspect of competition in which the Panthers didn’t outclass the Cardinals by a country mile.

The Panthers used creativity — more creativity, it should be said, than either New England or Denver in Sunday’s first game:

Carolina offensive coordinator Mike Shula has called excellent games in the playoffs. Don Shula had to be a proud papa not just because his son has reached a Super Bowl, but because Mike has been so good at his job.

Shula has done well partly because he’s creative, but also because he keeps things simple. You know: put the ball in Cam Newton’s hands and let the likely NFL MVP do his thing.

These next two runs were back-to-back plays in the third quarter. They enlarged Carolina’s already-huge lead, and they showed how well-rounded a quarterback Newton really is.

This first run was a display of power, carrying a defender multiple yards after the first point of contact to a first down:

This run showcased Newton’s ability to cut back, leap, and extend the ball across the goal line without fumbling:

Newton was also able to throw the ball vertically to receivers and tight ends in open space, with Arizona defensive backs constantly wandering out of position. He succeeded in short-yardage situations, again with his ability to reach the ball across the goal line and not lose control of the pigskin. Newton — in mind and body — towered over much of this game and the Arizona defense. He looked every bit like the MVP he’s almost certainly going to be.

A season ago, the Panthers did make the playoffs, but they couldn’t produce a winning record. A lot had to change this season in order for the franchise to realize its aspirations and claim an elusive first Super Bowl title. When receiver Kelvin Benjamin was lost for the season due to an August injury, everyone in and around the NFL wondered where Newton would be able to distribute the ball. The Panthers’ offense seemed destined to slog through a very difficult campaign.

Roughly five months after that injury, the Panthers posted 49 points in a game that propelled them to Super Bowl 50.

That’s most centrally a testament to the quarterback Cam Newton has become, but as every Panther showed against Arizona, this team has collectively improved to a degree which no one anticipated at the end of the long, hot summer.

While 30 NFL teams sink into a winter of discontent, the Panthers — at the top of their game — can revel in their NFC title and make travel plans for the San Francisco Bay area in the first week of February.