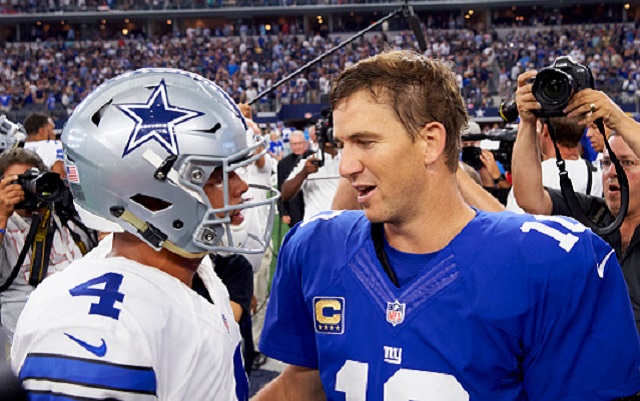 For much of the history of the NFC-AFC format, the NFC East has been one of the glamour divisions of the NFL. From the New York Giants and Washington’s Super Bowl successes in the 1980s, to the Cowboys becoming the team of the 90s and the Giants-Eagles rivalry of the 2000s that included two more titles for the G-Men, the NFC East has always had a relevant place amongst the top of the league.

Because of the combined successes of all four franchises since the 80s and the division’s place in the center of the East Coast media, the NFC East is often regarded as the best division in the history of the league. However, in recent years, the division has fallen from the top of the NFL to just another division, due to the struggles of all four teams.

Since the New York Giants won their second Super Bowl of the 2000s over the New England Patriots in 2011, no NFC East team has appeared in the NFC Championship Game. In addition to the drought of NFC Championship Game appearances, no NFC East team has earned a Wild Card berth since 2009 as the once-deep division known for its fierce rivalries turned into a shell of its former self. The seven-year streak of the NFC East having at least two teams in the playoffs made way for this recent period in which 10-6 was good enough to win a division that once brought out the best competition in the league.

This season has marked the return to the good old days, thanks to the surging 9-1 Dallas Cowboys and the revival of the Giants to join the defending division champions in Washington. The East is back to a three-team race that should bring back memories of 2006 and 2007, when the division had three playoff teams, some of the best rivalries in football and the Giants upset the undefeated New England Patriots to win their first Super Bowl with Eli Manning at quarterback.

After Week 11, all four teams in the division are at .500 or better and if the season ended this week, Dallas, the Giants, and Washington would all be in the playoffs. Only the AFC West can make such a claim this season as after long last, the NFC East’s teams finally have brought back the rivalries that have been staples of the NFL for decades.

The biggest catalyst for the division’s return to prominence has been the improvements made by the Cowboys and Giants, who quickly rebuilt after down years in 2015 to become Super Bowl contenders. Dak Prescott and Ezekiel Elliott in the draft have helped Dallas to the league’s best record, while the Giants made smart offseason moves after moving on from former head coach Tom Coughlin to hold a 7-3 record that includes the only win over Dallas this season.

Behind the resurgence of the Giants and Cowboys has been a steady follow-up season in Washington from quarterback Kirk Cousins, who has kept the team afloat in the Wild Card hunt this season despite the improvements from both division rivals. After Cousins exploded for 375 yards and the Washington offense hung 42 points on the Green Bay Packers on Sunday Night Football, the team moved to 6-3-1 and has lost just one game since Week 2. Not bad for a team in third place and 2.5 games out of first place in the division.

Even the Eagles, by far the worst team in the division in a rebuilding year with second overall pick Carson Wentz starting at quarterback, have had some level of success this season, thanks to wins over the Steelers, Falcons, and Vikings. But the attention is rightly focused on the three-team race among rivals that have done very little losing this season.

It’s been well over a full month since either the Cowboys, Giants or Washington have lost a game. That dates back to Oct. 9, to be exact. But that run will soon come to an end with a long list of late-season, must-watch divisional matchups, beginning on Thanksgiving when the Cowboys host Washington. If Washington can knock off Dallas on the road this Thursday, the two wins the Cowboys hold over their division rivals would be instantly halved and we would have the true old school showdown we have all been craving out of the division for the last few years.

Only acceptable response to this #ZekeLeap:

After Thanksgiving’s clash between Dallas and Washington, the Giants host the Cowboys at MetLife Stadium on Dec. 11 that will have the same high stakes. The Giants then travel to the nation’s capital for Week 17, and could determine playoff hopes for both teams depending on the potential scenarios that might develop by then.

In between those games, the Eagles also have the chance to play spoiler with games left against all three teams, increasing the potential for drama. The hate between all four franchises is still very real, and football fans raised on the battles of yesteryear will be overloaded with plenty of NFC East nostalgia from here on out.

Nobody knows if Washington and the Giants can make up the ground on the red-hot Cowboys or if all three teams will make the playoffs like those two glory years in 2006 and 2007. Regardless of what happens, there will be plenty of comparisons to battles of past eras during December. After a long period of dormancy, it is finally time for those rivalries to seize the NFL spotlight and remind us all why nothing compares to the prestige of the league’s most enticing division.