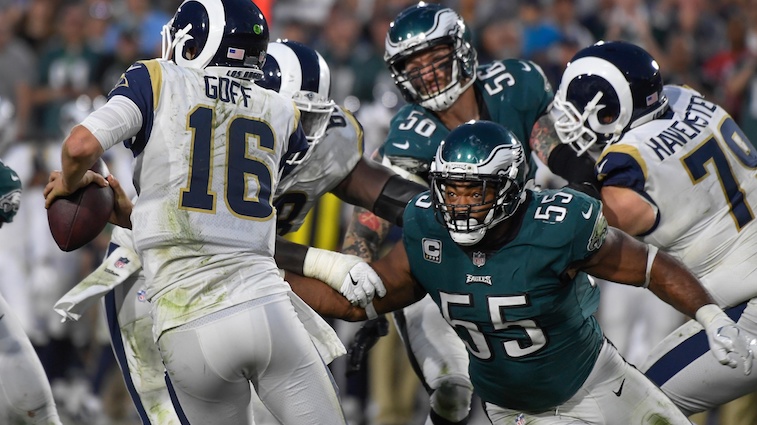 Watching the NFL seems like the Rorschach test. Take a closer look. You see what you want to see and sometimes it looks completely different to someone else.

This is especially true in the NFC. There’s a week left to the regular season, and we’re still not sure what’s going to happen.

The AFC appears fairly predictable. The defending championship New England Patriots will probably reach the Super Bowl in Minnesota. If there is an upset, only two teams realistically could pull it off: the Pittsburgh Steelers and the Jacksonville Jaguars. That’s it. That’s the list.

In the NFC, however, nothing would be a surprise. The playoffs will be as wide open in that conference as they have ever been. Everybody has a shot. There is one playoff spot left to fill and it will be the Atlanta Falcons or the Seattle Seahawks taking it. That’s right, the No. 6 seed will either be a team that was in last year’s Super Bowl (Atlanta) or a team that made back-to-back Super Bowls just a few years ago (Seattle).

Who should be the favorite?

The NFC playoffs are setting up to be legendary. Any of these teams can go on a run. As wide open as it gets.

The problem with the NFC is that the top two seeds look vulnerable. Philadelphia and Minnesota are being led by backup quarterbacks. Usually, when you lose your starting quarterback due to injury in the middle of the season, it’s exceptionally hard just to get to the Super Bowl. It’s easier to survive a change if that happens prior to the season (see Kurt Warner stepping in for Trent Green with the 1999 St. Louis Rams). But when it happens after the season has already started, it’s lot more problematic.

The New York Giants pulled off a minor miracle when Jeff Hostetler bailed the team out when Phil Simms went down and the team won Super Bowl XXV. The Patriots survived when Drew Bledsoe went down in the second game of the 2001 season. He was replaced by a guy whom you may have heard of, Tom Brady, and won the Super Bowl.

But for the most part, those are outliers. That’s why you should look at Philadelphia and Minnesota with skepticism. The Eagles are counting on Nick Foles. With the exception of one charmed season in the Chip Kelly offense (27 TDs to 2 INTs in 2013), Foles has been unremarkable. He reminded everyone of that with an abysmal Christmas Day performance (19 of 38 for 163 yards with a TD and INT) at home against the Raiders. A performance like that in a playoff game usually leads to a loss.

The good news for Foles is that he is surrounded by the same talent that helped make Carson Wentz an MVP candidate. The Eagles have one of the best offensive lines in the league. Tailbacks LeGarrette Blount and Jay Ajayi fuel the second-best running game in the NFL (136.3 yards per game). And wide receivers Alshon Jeffery and Nelson Agholor and tight end Zach Ertz all have at least eight TD catches. The defense is also stout — the Eagles have surrendered the second-fewest points in the conference (289).

But after watching the Eagles struggle against the New York Giants and Oakland Raiders in recent weeks, that has to give coach Doug Pederson cause for concern. Yes, home-field advantage helps but Philadelphia will have the worst quarterback in the NFC playoffs.

Minnesota seems like a safer pick because it has received spectacular play from its backup quarterback. Credit Case Keenum for exceeding expectations. He’s seventh in the league in passer rating (98.1). That’s a huge improvement for a guy who had never posted a rating higher than 87.7.

Keenum is a good example of a guy who is benefiting from the talent around him. Minnesota has one of the best pair of wide receivers in the league with Adam Thielen (1,215 yards) and Stefon Diggs (781). Remember, Sam Bradford looked sensational in two games with Thielen and Diggs before he got hurt. The Vikings seem to realize Keenum’s limitations because they seem content to let him hit the open market after the season.

Like Philadelphia, Minnesota’s defense is also tough, having allowed an NFL low-242 points. And like Philadelphia, that might not be enough. Can you really entrust your Super Bowl hopes to a career backup? Keenum has done a good job of not turning over the football (only two interceptions in his past six games), but can he lead a critical drive in a playoff game?

Questions with Philadelphia and Minnesota will make the NFC playoffs intriguing because of the superior quarterbacks they might have to face. New Orleans has Drew Brees. Los Angeles has Jared Goff. Atlanta has Matt Ryan and Carolina has Cam Newton. Seattle has Russell Wilson. That is a lot more established firepower at the league’s most important position.

And that’s not all. New Orleans is scary because this is the most complete team Brees has had in five years. The Saints have a punishing running back combination in Mark Ingram and Alvin Kamara, and a great offensive line.

Patriots vs Saints in Super Bowl 52 is happening don't @ me

And as good as the Saints are, the Rams look even more lethal. There isn’t a better young offensive pair than Jared Goff and Todd Gurley, who lead the NFL’s highest-scoring offense (465 points).

Carolina and Seattle are difficult to game-plan against because Newton and Wilson can beat you with their arm and legs. And what about the defending NFC champion Falcons, who are virtually always a Julio Jones touchdown away from victory?

In a one-game sample size, anything can happen. Perhaps the top two seeds will hold serve and it will be Minnesota and Philadelphia in the NFC Championship game. Just don’t act surprised if the No. 6 seed – Seattle or Atlanta – winds up as the NFC champion. It’s that kind of season.