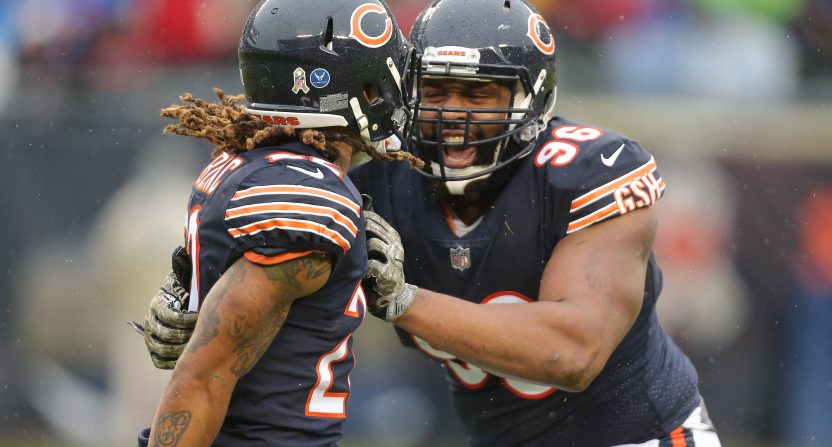 An NFC North team has made it to the NFC Championship in three of the last four seasons, but the division has not sent a franchise to the Super Bowl since 2010. Could that change this season?

There is a bunch of optimism surrounding each of the four teams in the NFC North this year. Will any of them finish with more wins this season than the amount they had in 2017?

Chicago is finally free of the misery the franchise experienced under head coach John Fox. During the three seasons with Fox, the Bears won just 14 games and finished last in the NFC North each and every year.

Now Chicago has a new head coach in Matt Nagy. In 2017, Nagy was the offensive coordinator for a Kansas City Chiefs team that finished sixth in points per game.

The Bears are hoping their new head coach can turn around an offense that has not ranked higher than 23rd in scoring over the last four seasons.

Nagy has some interesting weapons to play around with this year, including quarterback Mitchell Trubisky, running back Jordan Howard, wide receiver Allen Robinson, and tight end Trey Burton. Chicago likely won’t be a playoff team in 2018, but they should at least be a little more fun to watch.

Despite leading the Lions to the playoffs in two of the last four years as the team’s head coach, Jim Caldwell was shown the door this offseason. In his place this year is former New England Patriots defensive coordinator Matt Patricia.

Patricia was brought in to improve a Detroit defense that gave up the sixth-most yards per game in 2017. Oddly enough, the Patriots’ defense (led by Patricia) actually gave up more yards per game last season than the Lions’ defense.

Detroit’s passing offense should still be among the NFL’s best in 2018, but they still don’t have a top tier running back on their roster. Ameer Abdullah, Theo Riddick, LeGarrette Blount, and Kerryon Johnson will compete for snaps this season, but none of these guys are expected to become the second Lions back to rush for 1,000 yards since 2005.

Seven or eight wins for seems most likely for Detroit this season. The Lions will probably remain in the hunt for the playoffs for most of the year and then find a way to mess up their chances like they normally do each season.

After the first five weeks of last season, the Packers were 4-1 and they appeared to be on their way to landing a spot in the playoffs once again. However, Green Bay quarterback Aaron Rodgers was injured in Week 6 and the team ended up missing out on the postseason for the first time since 2008.

In 2018, the Packers will be attempting to find their way back into the playoffs with a healthy Rodgers and some new additions to their coaching staff. Joe Philbin is back in Green Bay as the team’s offensive coordinator for the first time since 2011, and the Packers also hired Mike Pettine as their new defensive coordinator.

Having Rodgers back in the lineup should provide and immediate boost to Green Bay’s success rate in 2018. But the Packers are also hoping Pettine can improve the team’s defense, which ranked 26th in points allowed last season.

As much as some believe Rodgers’ return makes Green Bay an automatic Super Bowl contender in 2018, the team still has a bunch of question marks heading into the season.

The Packers quarterback is very talented, but his absence last year proved that the team still has a lot of areas to improve in before they can get back to being a true championship contender.

Everything seemed to go right for the Vikings last season. Well, at least until their loss to the Philadelphia Eagles in the NFC Championship.

After ending last year a game short of playing in the Super Bowl, Minnesota went out and spent a ton of money to land free-agent quarterback Kirk Cousins. The Vikings are hoping that Cousins can give them the boost necessary to play in their first Super Bowl since 1976.

The combination of their new quarterback with their stout defense should keep Minnesota among the NFL’s top teams in 2018. However, winning more than 13 games this season is not something that seems too likely.

The Vikings will be playing a first-place schedule in 2018 and their in-division matchups are not going to be a piece of cake either. 10 or 11 wins is an amount that seems more attainable for Minnesota this season.