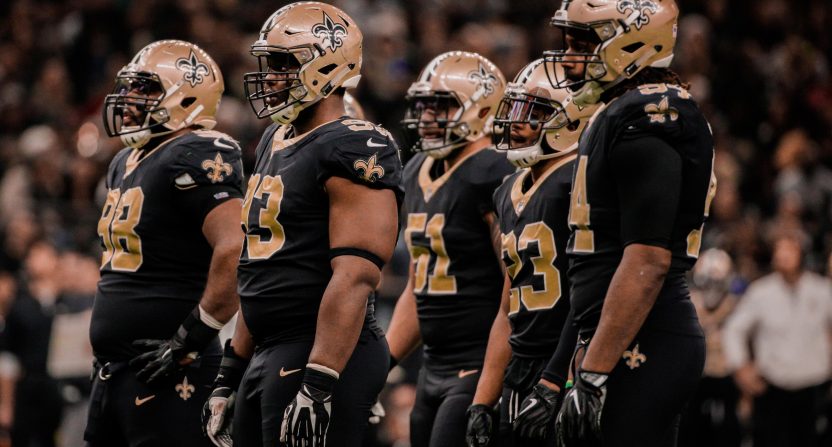 Last season, the NFC South was arguably the best division in the entire NFL. Three teams from the division won more than 10 games and each of these squads qualified for the playoffs.

In 2017, the NFC South was the only division in the league that had more than two teams earn a spot in the postseason. However, despite half of the NFC playoff teams being from the NFC South last year, none of them were able to get past the divisional round of the postseason.

After a disappointing showing in last season’s playoffs, how will each team from the NFC South perform in 2018? Will any of the four squads win more games than last year?

Compared to last year’s team, the 2018 Falcons’ roster is going to look very familiar. The majority of their starters from a season ago have returned for 2018 as Atlanta will be attempting to become the first team to ever play a Super Bowl in their home stadium.

Falcons quarterback Matt Ryan will have another option to throw to in 2018 as the team selected Alabama wide receiver Calvin Ridley in the first round of last April’s NFL Draft. If Ridley is able to find his fit in the offense early, the Falcons could end up having one of the most lethal passing attacks in the entire league.

On the defensive side of the ball, Atlanta is definitely talented. But to get to that next level, the Falcons’ defenders must figure out how to generate more turnovers in 2018 than the amount they finished with last season (fourth-fewest takeaways in the NFL)

In each of the last three seasons, the Panthers have failed to finish among the NFL’s top 20 passing offenses. So this year, Carolina went out to try and actually improve their passing attack.

The Panthers traded for veteran receiver Torrey Smith in March and then a few weeks later, added Maryland wide receiver D.J. Moore in the first-round of the draft. Carolina is hoping that both of these new players will provide some much needed help to their underwhelming passing offense.

In another attempt to improve the team’s pass attack, the Panthers went and hired Norv Turner to be their offensive coordinator. Although Turner has experienced success in the past, he has never really worked with a quarterback as mobile as Cam Newton.

If Turner attempts to turn Newton into more of a pocket passer in 2018, then Carolina may be in for a season to forget.

Drew Brees has been the face of the Saints franchise for more than a decade now. The quarterback joined New Orleans back in 2006 and all he has done is lead the team to six appearances in the playoffs, four division titles, and one Super Bowl win.

However, at age 39, Brees’ career with the Saints seems to be nearing the end. Last year, the quarterback finished with the fewest single-season passing yards (4,334) and touchdowns (23) during his tenure with New Orleans.

The Saints seem to be pretty aware of Brees not being the player he once was as the team shifted to a more run-focused offense last season. Although, New Orleans may ask more from the quarterback during the early part of 2018 as Saints running back Mark Ingram is suspended for the first four games of the season.

If Brees’ numbers continue to trend downward in 2018, it could be a struggle for New Orleans to get back into the playoffs.

2018 already looked to be a difficult year for the Bucs and now with quarterback Jameis Winston being suspended for the first three games of the season, wins may be even tougher to come by.

Tampa Bay is coming off a year in 2017 that saw them finish with just five victories, including just one in their final six games. It’s pretty surprising that the Bucs decided to keep Dirk Koetter as their head coach for 2018, but his seat will certainly be one of the NFL’s hottest to begin the year.

The Bucs’ defense should be a little better in 2018 with the additions of defensive end Jason Pierre-Paul and rookie defensive tackle Vita Vea this offseason. But most of the players from last year’s unit that gave up the most yards in the league are returning also, so there is no real reason to think Tampa Bay’s defense will improve that much during the upcoming season.