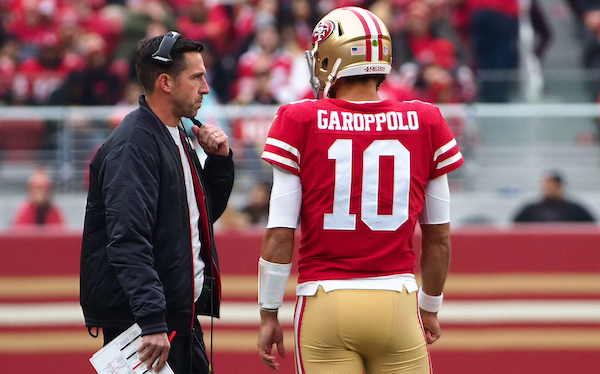 It has not really been that long since the NFC West was won by a team with a losing record. Heading into 2018 though, this division could be one of the most competitive in the entire league.

The NFC West features a good mix of teams in the middle of building a future contender and those who are immediately ready to challenge for a championship this year.

Last season, the division was definitely full of surprises. Will that be the case again in 2018?

How will each of the four teams from the NFC West perform in the upcoming season in comparison to how they played in 2017?

For 2018, the Cardinals are in an interesting situation. They have a new head coach in Steve Wilks, a bunch of playmakers on both sides of the ball in David Johnson, Larry Fitzgerald, Chandler Jones, and Patrick Peterson, and a rookie quarterback in Josh Rosen whose shadow will loom large over presumed starter Sam Bradford.

Despite the talent Arizona has and the fact that they won eight games a year ago without their top running back and quarterback for most of the season, they are about to be the latest team to deal with the curse of Bradford.

Even though Bradford continues to be praised as one of the league’s most talented signal callers and continues to land starting jobs around the NFL, the quarterback still has not led a team to the playoffs. Until he does, there is really no reason to think that the Cardinals will be a part of the 2018 postseason.

Los Angeles was very active this offseason in an effort to improve a roster that was already pretty talented.

New members of the Rams for 2018 include cornerback Aqib Talib, defensive tackle Ndamukong Suh, wide receiver Brandin Cooks, and cornerback Marcus Peters. Whether or not this new group of players will be able to take Los Angeles to new heights in the upcoming season remains to be seen.

The key to Los Angeles’ success in 2018 will likely depend on if quarterback Jared Goff is able to repeat the high level of play that he displayed on the field last season. Teams now have a full year of tape on Goff in the Rams’ current offense and this could favor the opposing defenses.

Still, even if Goff struggles in 2018 more than he did last year, Los Angeles has enough talent around the kid to come up with wins without needing him to put the fate of the entire team on his shoulders. Injuries in the upcoming season are the only thing that should prevent the Rams from winning more games than the total they finished with last year.

A team led by Jimmy Garoppolo is eventually going to suffer a loss, right? Probably, but he hasn’t given people any reason to think otherwise so far during his NFL career.

Even with Garoppolo as their starting quarterback in 2018, the 49ers seem to still be about a season away from capturing their first playoff berth since 2013. San Francisco should play better in 2018, probably just not well enough to finish as one of the top six teams in the highly competitive NFC.

The 49ers might have found their solution at quarterback, but they still need to see a big improvement in the play of their defense before the team becomes an NFC contender once again (24th in yards allowed last season). San Francisco did add veteran cornerback Richard Sherman to their roster this year, but there is no telling how well he will be able to play in 2018 coming off a torn Achilles.

Despite all of this, the 49ers are still not a team people should be betting against during the upcoming season. When San Francisco is able to get a solid performance from both sides of the ball, they have a good chance to defeat almost any team they face.

When a team gives up the third-most quarterback hits during a season, one would assume that a top priority for that team in the following offseason would be to improve their offensive line. However, the Seahawks apparently don’t believe this is a solid solution to keep Russell Wilson off the ground.

Seattle added one offensive lineman in free agency this year (D.J. Fluker) and one in last April’s draft (Jamarco Jones). Neither of these two players are enough to significantly improve the play of the line in 2018.

In addition to not fixing their blocking problems, the Seahawks also lost a bunch of playmakers on the defensive side of the ball this year including Michael Bennett, Sheldon Richardson, Cliff Avril, and Richard Sherman.

Seattle still has talented defenders like Bobby Wagner, Earl Thomas, and Kam Chancellor left on their roster, but their reign as one of the NFL’s best defenses likely won’t continue in 2018.