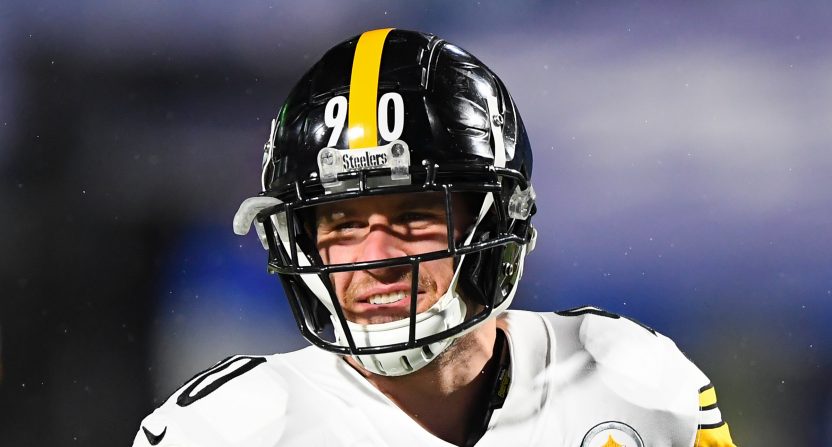 With two weeks remaining in the 2020 NFL regular season, the MVP race is down to the two players quarterbacking the respective conference leaders. With that in mind, let’s break down the home-stretch battles for all of the primary regular-season awards.

The two-time MVP has better numbers across the board than the one-time MVP, and both teams have been successful enough that two more wins for Mahomes isn’t enough of a difference-maker. Rodgers has a small edge in most advanced categories as well.

I don’t typically believe in separating MVP and OPOY, but Henry could end up with a more outstanding overall season without making as large a difference for a contender. The Titans haven’t been as successful as Green Bay and Ryan Tannehill hurts Henry’s MVP clout, but he’s running away with the rushing crown and might hit 2,000 yards.

Only Donald, Watt, and Trey Hendrickson of the New Orleans Saints have a dozen or more sacks this season. Donald has 12.5 sacks, four forced fumbles and 25 quarterback hits for a contender. Watt has 13 sacks and just one forced fumble, but seven passes defensed and a ridiculous 40 quarterback hits. Nobody else has 30. Meanwhile, he’s already been AFC defensive player of the month twice.

Herbert has been the league’s top rookie passer with a 27-to-10 touchdown-to-interception ratio, but Jefferson now has six 100-yard games and is a top-10 receiver for the Vikings. The former arguably has less support in a bigger role than the latter, so it’s a toss-up. For now, we’ll side with Jefferson, who ranks third in the NFL in yards per target.

The No. 2 overall pick hasn’t been as effective as many had hoped this season, but he’ll win this thing by default with his 5.5 sacks because no other defensive rookie has made much of a difference in 2020. Both Young and Blackmon have shined more than their so-so numbers indicate.

Flores has orchestrated an unreal turnaround in Miami. The Dolphins are improved, but they’re not that talented yet, and he has them in the playoff picture. Meanwhile, Rivera has overcome cancer while dealing with the standard B.S. (injuries, quarterback volatility, a lack of consistency, and talent) surrounding the WFT. Whoever makes the playoffs gets the edge, and Washington has a better chance right now.

Comeback Player of the Year: Washington Football Team QB Alex Smith vs. Nobody

This is a no-brainer considering that the dude came back from 17 freakin’ surgeries. Nobody else deserves a mention.