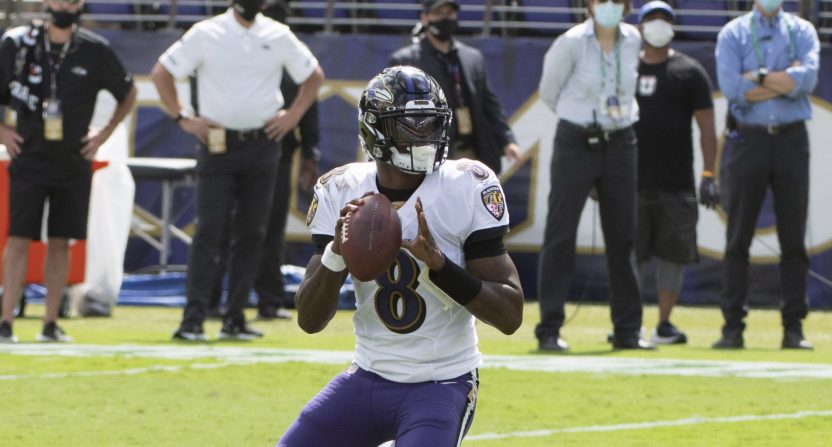 The 2020 NFL regular season is just 12.5 percent complete, but we’re already monitoring the league’s top MVP candidates. Here’s a look at the 10 players best aligned for MVP runs based on the first two weeks of the 2020 campaign.

1. Seattle Seahawks QB Russell Wilson: Wilson is the most pressure quarterback in the NFL, and yet he’s also the league’s highest-rated passer. He has already thrown nine touchdowns to only one interception (that wasn’t his fault), and the Seahawks look like Super Bowl contenders at 2-0.

2. Baltimore Ravens QB Lamar Jackson: The AFC’s highest-rated passer is by far and away the league leader in air yards per pass attempt, and he continues to be a force on the ground as well for a dominant, 2-0 Baltimore team.

3. Buffalo Bills QB Josh Allen: The third-year top-10 pick is breaking out before our eyes. The league leader in passing yardage has six touchdown passes to zero picks, and he’s also a threat with his legs for the rolling, 2-0 Bills.

4. Green Bay Packers QB Aaron Rodgers: The two-time MVP looks a lot like his old self so far for a Packers team that has scored 40-plus points in back-to-back games. Rodgers appears to be inspired. Six touchdowns, no picks.

5. Jacksonville Jaguars QB Gardner Minshew II: Very little support, no pedigree, no problem. Minshew worked his magic in Week 1 and had a bad Jags team hanging around with a playoff-caliber opponent in Week 2.

6. Kansas City Chiefs QB Patrick Mahomes: The numbers aren’t there with the top four guys, but Mahomes has still been superb for a team that is perfect.

7. Arizona Cardinals QB Kyler Murray: His passing numbers will still need to improve, but the second-year No. 1 overall pick has been an utter playmaker with three rushing touchdowns for the 2-0 Cards.

8. Green Bay Packers RB Aaron Jones: It hurts Rodgers’ case a bit that after dominating the Detroit Lions in Week 2, Jones now leads the NFL with 234 rushing yards to go with three touchdowns. That’s a pace that at least gets him on this list.

9. Arizona Cardinals WR DeAndre Hopkins: Same applies to Hopkins, who in his first year with the Cards is on pace to catch an NFL-record 176 passes from Murray.

10. New England Patriots QB Cam Newton: Dude has already scored four rushing touchdowns and has a completion percentage above 70 for a team that looks as though it will contend again in 2020.