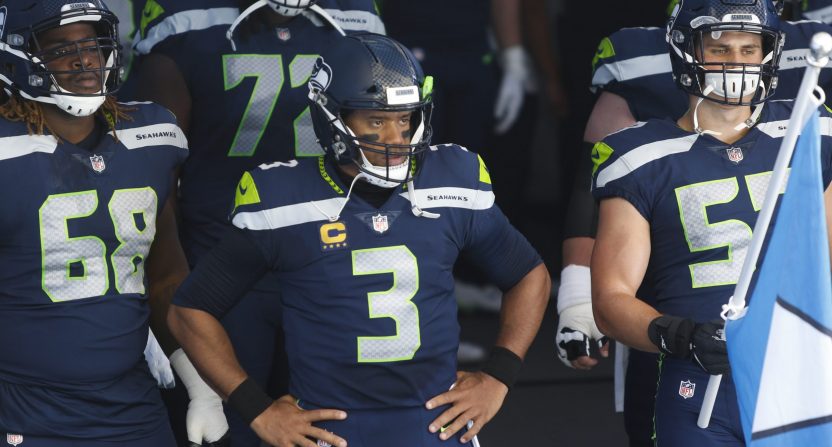 The 2020 NFL regular season is just 12.5 percent complete, but we’re already monitoring the league’s top MVP candidates. Here’s a look at the 10 players best aligned for MVP runs based on the first three weeks of the 2020 campaign.

1. Seattle Seahawks QB Russell Wilson: He’s on pace to throw 75 touchdown passes to five interceptions, and he’s the highest-rated passer in football by a 14-point margin for a team that’s taking care of business at 3-0.

2. Buffalo Bills QB Josh Allen: The NFL’s second-highest-rated passer also has 84 rushing yards and two touchdowns on the ground. He’s been incredible on deep balls, on third down, and late in close games. He’s the MVP of the AFC right now.

3. Kansas City Chiefs QB Patrick Mahomes: His performance against the Baltimore Ravens on Monday night was legendary. The 2018 MVP has now produced 10 passing/rushing touchdowns to zero turnovers. He’s right in the mix as a top-tier candidate again.

4. Green Bay Packers QB Aaron Rodgers: After several down years in which he wasn’t an MVP-caliber player, an inspired Rodgers looks tremendous early this season for a 3-0 Packers team that’s averaging a ridiculous 40.7 points per game.

5. Baltimore Ravens QB Lamar Jackson: That Week 3 dud against the Chiefs really hurt Jackson’s chances of winning a second consecutive MVP, but he’s still ridiculous with his legs, his passing numbers remain strong and he’s yet to throw an interception.

6. Arizona Cardinals WR DeAndre Hopkins: The Cards are contenders. and their new top receiver is on pace to catch an NFL-record 171 passes for 1,899 yards.

7. Los Angeles Rams DL Aaron Donald: Same old for Donald, who has eight quarterback hits, three sacks, a forced fumble, and 11 tackles thus far. He continues to be the best defensive player in the NFL.

8. Kansas City Chiefs DL Chris Jones: The only player in football with more than three sacks and multiple forced fumbles also has six quarterback hits. He’s earning all that new money for a Chiefs defense that has shined.

9. Tennessee Titans QB Ryan Tannehill: The Titans are quietly off to a 3-0 start, and Tannehill is proving last year’s breakout experience wasn’t a fluke. The 32-year-old has thrown six touchdown passes to one pick, and has been one of the most accurate passers in football.

10. Green Bay Packers RB Aaron Jones: Jones is another big reason the perfect Packers are on pace to shatter scoring records. With 398 scrimmage yards and a 6.1 yards-per-attempt average, he’s right there with Alvin Kamara among the most productive non-quarterbacks in the NFL thus far.